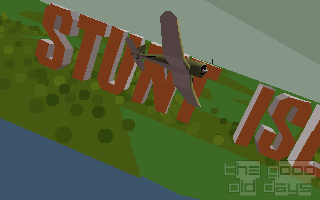 Stunt Island is one of the most original games in existence! To write a comprehensive text about it would be completely impossible because of the sheer mass of features and the fact that they are all cross-linked. So I'll just describe the individual parts. Basically, you're working in the film business. Your main job is stunt pilot. Hollywood owns a complete island to shoot these scenes: Stunt Island. Here you can find different scenarios ranging from a farm to a metropolis and from desert to mountains. Even some sites like the Golden Gate Bridge and Alcatraz have been imitated. Depending on which surroundings are needed for the particular movie, the stunts are shot in another corner.

But now to the parts. After you've arrived on the island, you're in the studio-village. Here you can visit all the necessary buildings in Adventure-style. No dry menus, but a world which almost comes alive. At least if you turn off the sound (urgh - the speech!).

The first stop could be the airfield. Here you can choose any of the aircrafts available in the game and fly around a bit. The choice is really big and there are not only planes, but also 'freaky' vehicles like a duck or a Pterodactyl! Each 'plane' has its characteristics. Even though the game is not too realistic (i.e. the planes can be considered more as groups than as really indicidual machines), your choice makes quite a difference here. Some obvious factors like speed and weapons (chosen out of gun, missiles and bombs - or eggs for the duck!) differ. Then the general type of the plane also makes a difference. Ever tried a looping with a Cessna? On the whole, the airfield is just there for flight practice. There is no goal, all you do is to become familiar with the machine and explore the island. But that is already fun.

If you've practiced enough, you should enter the Stunt Coordinator's office. He offers you a lot of different preset stunt scenes. Some of them are a piece of cake (Barnstorm), others are almost unbeatable. But the money you get for them is also accordingly... Money only plays a part if you're participating in the contest for the best stuntman though. Each stunt has some presets like how many tries you have and how much your payment is lowered if you wreak havoc. In general, all you have to do is fulfill what the Stunt Coordinator told you. But with all the different people and 'objects' involved in a typical stunt, much can go wrong. Exact timing and precise flying is a must.

After you've succeded in a stunt, you can go to the cutting room. As it's for a movie, it has of course been recorded from different angles. And if you want to, you can mess around with the raw material. Video editing has never been so easy: with clearly labelled buttons you can switch cameras, record, play, rewind and so on. The finished product can be watched in the local movie theater. Watching your own 'double-success' (doing the stunt and cutting the film) is even more satisfying. And the best thing: with a neat little program (makeone.exe), you can also convert your films to self-running files to share them with others.

But what after you've finished all the standard stunts? Then you'll discover the option to create your own stunts. Yes, that's right: you can design your personal setting, characters and background story. Of course you have to stick with the given pool of objects, but I doubt you'll miss anything in that great choice.

All the stunts are based of 'events'. They always have the same style: “IF [event] THEN [effect]” or more complex “IF [event] AND [event2] OR [event3] THEN [effect] AND [effect]” and so on. The events are set in a comfortable editor using drop-down menus. If you know some programming language like Basic, you won't have any problem with even the most advanced options like 'flags'. But even if you've never heard of programming, you should be able to get some good results.

The event-handler can also be used to cut the film. That takes some time, but it ensures everyone gets the same result in the end. It's still possible for users to do the cutting themselves though.

Stunt Island isn't a real flight sim. The flying is more action based than realistic. After all it's only a part of the game anyway. Especially all the 'surrounding' features got me addicted to the game. The self-designing of stunts is like creating little games. And you're not even stuck with planes there. There are also humans, cars and ships to name but a few. But there's one little bug which makes the usage of them difficult: every object can not only drive (a house...), but also fly! So every stunt in which you play a ground vehicle depends on the player's goodwill not to cheat. But isn't this the same with every game?

Paul:
Me very like play gamer
federico:
I'm from argentina the stunt island its the most original game in the world!
Mr Creosote:
Feel free to share anything about Stunt Island (1992) here!
[Reply] 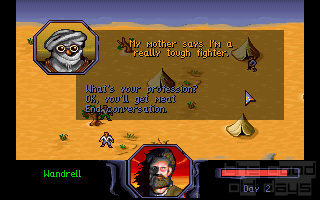