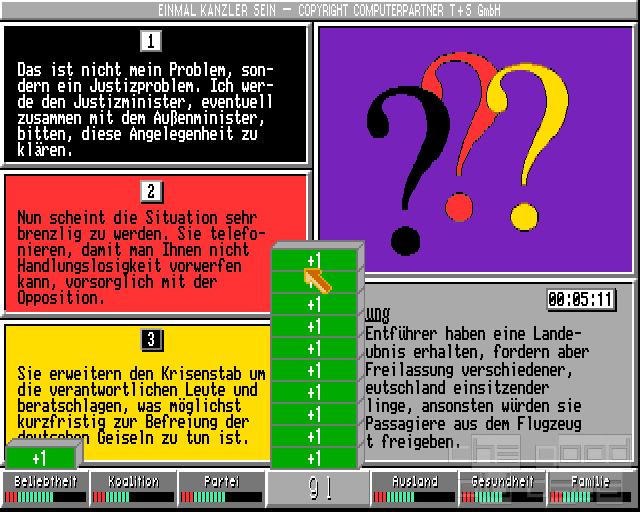 In 1986, Rio Reiser had a big hit singing what he would do if he were king of Germany. With this anarcho-dadaist hymn, he poured out satirist derision all over the German political circus. Everybody was singing along and laughing, but by 1991, chancellor Helmut Kohl (who had been one of the main targets of the song's mockery) was still in office, more powerful than ever. That was when Einmal Kanzler sein (Being Chancellor) was released.

It does not go quite as far as the song. You can't just make arbitrary, sweeping changes to the TV programme. However, it will allow you to appoint random people to silly jobs – if this is one of the given options.

This is because the game is played in multiple choice style. A briefly described situation and three options to choose from – this is how it goes from beginning to end. The choices will then result in an increase or decrease of your personal values in areas like popularity, party or family. These areas are not quite cleanly defined: 'health', for example, is used both for issues of health policy, but also for your characters personal workload or relaxation. 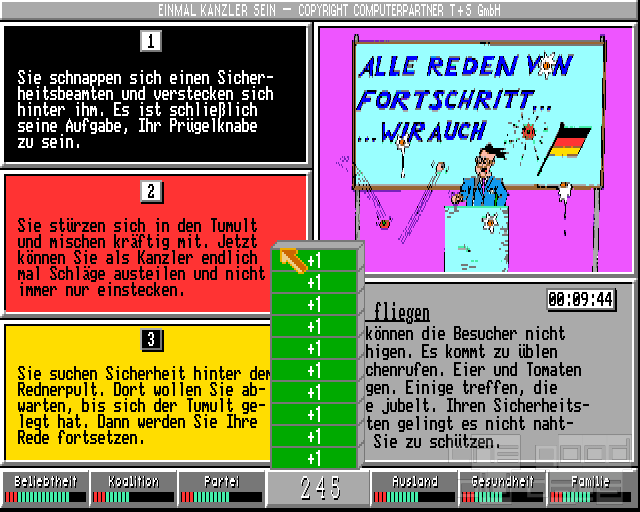 Though who would split hairs in such an obvious farce? Most of the time, the decisions to be taken are less about deciding political policy, but rather about bumbling through little affairs, embarassing interviews and haggling over jobs as well as with lobbies – without ever really becoming all too stingy.

Usually, there is one choice which is rather obviously 'correct': reasoned, prudent actions based on personal integrity are usually rewarded. Other options usually come down to being openly miffed, getting back at someone for reasons of personal vanity and so on. Then, there is also the option of just doing nothing and sitting the situation out (Kohl-style). You could say that reality was more satirical than this satire, as playing along with the cheeky tone is not rewarded, unlike in the similar-themed Yes, Prime Minister.

Also, it is a pity that although the events do develop over several questions, this development is hardly ever context sensitive. For example, if the situation is about breaking the speed limit and you immediately choose to admit everything and publicly announce to pay the bill out of your own pocket to calm things down, the game will still offer the option of blaming the driver in subsequent questions – using wordings which insinuate you may have followed this strategy all along.

From time to time, there are simply action scenes, a game of Mastermind or a couple of trivia questions to spice things up. With the same frequency, the game will ask you whether you really want to continue playing. After not too long a time, you will probably decline due to the lack of diversity. It's a nice, short diversion, but there is really not a lot behind the curtain. 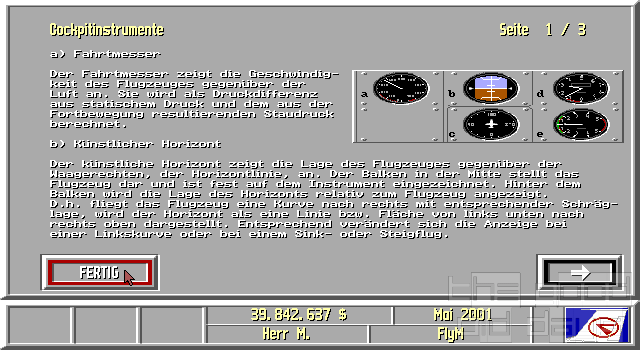