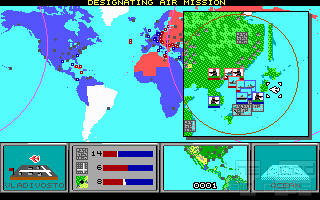 A real classic by the late designer legend Dani (formerly Dan) Bunten! The games's basic concept is quite simple: You start with a city (or in the scenarios with many) and have to conquer the earth (other preset or random maps do not exist). There is always exactly one enemy.

The ways of conquering are conventional, too. You can just occupy cities with military or “buy” their sympathy with money. Neutral regions are easily conquered by that because they are neither defended well nor do they reject money, while the enemy's cities (at least on the front) are packed with defenders and are therefore immune to bribing.

So you have to do better. You could either use an even greater conventional force or throw the atom bomb. Unfortunately other cities will fall apart from your empire then.

You control land and naval units directly. But planes can only stay in cities, on airfields or carriers. From there they take off for their so-called “missions”. These are either scouting or bombing enemy cities or units. After that the planes return to their original place immediately.

Another point is the invisibility of the enemy. Only units close to yours will be shown. But you can also buy satellites that show more of the hidden world. It is a pity that the so-called Satellite Killers only cost half as much...

The vital factor in the game beside the according to the number of controlled towns flowing money is oil. Without it your units cannot move or defend themselves. Because of that there are oil fields apart from cities and airports. Just like in reality they are in hardly accesible areas in most cases.

The clou: Everything goes on in real time. That is why it is often (positively) stressful, e.g. when you are just about to conquer the enemie's capital and you suddenly notice that he took advantage of this situation and conquers the not defended part of your empire.

It is the reduction of elements that makes the game genius. Of course there could have been thousands of options but that surely would not have helped the game. On the contrary! You get access to the game very fast nevertheless it is very motivating. And if you are tired of playing against the computer there is still the (at that time revolutionary) modem option.

Command HQ is hailed as the first real-time multiplayer strategy ever. Whether it is true or not is of little consequence. The more important fact is that Command HQ was designed by one of the most important computer game designers ever, Dani Berry. She was the mastermind behind such games as M.U.L.E. (credited as Dan Bunten), Cartels and Cutthroats and Seven Cities of Gold. As all her other games, Command HQ is a small work of art in itself.

The game is a one-on-one real-time strategy where your goal is to conquer the world. This game offers several real-life scenarios, such as World War I, World War II (for some reason only from 1942 when the US entered the war) and a few imaginary scenarios. An editor lets you create your own scenarios as well. In the game, you build armies and send them into the field. Nothing more? Yet, the awesome balance of the game requires deep strategic thinking.

One of the first things you will notice is that you don't have to take care of the resources. Resource gathering is fully automated, handled by the cities. Yet, resources are crucial in the game, and often you'll have to adjust your strategy in order to capture some resources before commencing the main offensive. Once you start moving the armies, you will notice another thing: Because this game is real-time, it is quite hard to estimate the time an army needs to travel between two points. As a consequence, you'll spend a lot of time carefully planning when to send out armies, in order to have them arrive at a certain place at the same time. In addition, armies react with more delay as they move away from your capital, so you'll have to think into the future.

On the downside, the A.I. is very unbalanced. At the beginning, it's got the edge, but if you survive the first few minutes and capture a few cities, the balance of power will change. The A.I. is too much defense oriented to pose any serious problem. That's why there is the multiplayer mode, however, which works even today. All you need is a serial connection.

About the author
Danielle Bunten Berry “No one on their death bed ever said, 'I wish I had spent more time alone with my computer!'” Dani Berry was the first and greatest of multiplayer games advocates. Credited with designing such gems as Cartels and Cutthroats, M.U.L.E., Seven Cities of Gold, Heart of Africa, Modem Wars, Command HQ and Global Conquest, she was a designer par excellence. She was the first to design multiplayer strategies games. The first of the lot was M.U.L.E. (Multi-User Labor Element), which combined a business simulation with arcade, and was playable for up to four players on one Atari 800 (the only computer of that period that supported four joysticks). Later came Modem Wars, her first Internet multiplayer game, followed by Command HQ and its sequel, Global Conquest. Her last game was War Sport, released in 1997, one year before her death. Dani was also a perfectionist. Who does not believe the incredible amount of realism in Seven Cities of Gold? The proper use of flora and fauna, the uncertainty when dealing with native guides, their mood change that depended on your actions and the decreasing effect of your technical superiority? She will be dearly missed.

David Warhol David Warhol is one of the first masters of sound and music in computer games. He is responsible for both in games like The Bard's Tale II, Sentiel Worlds I, Zak McKracken and the Alien Mindbenders, Pool of Radiance, Neuromancer, Maniac Mansion, Loom and many, many more. I can name more catchy tunes from this author that of any single popular musician, yet his name remains obscured to many. Command HQ was his next to last game; after this one he, sadly, worked only on Chuck Yeager's Air Combat.

I am trying to compile a list of people who still play Command HQ, to make it easier for everyone to find an opponent for this classic wargame. 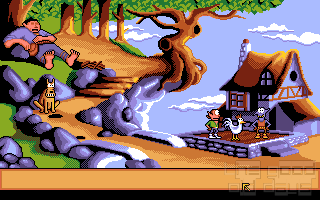