In the strategy genre, there is usually a distinction between high level strategy and low level tactics. Some games do one of them right, some excel at the other. Consolidating both levels into one game rarely works: It is the interface between the two which is hard to get right. One major aspect is that none of the levels may take up too much time, because otherwise, the players will forget about what happened on the other. How does this fare with Cyber Empires?

The game is all about robot armies. They are being managed, i.e. bought and moved around, on a strategic map. There are different types of robots, of course: Slow, bulky ones with heavy armour and destructive weapons, small and fast ones and everything in between. Then, these robots are sent into battle - and this is where the (semi-)tactical phase begins and the game zooms into the battle screen. 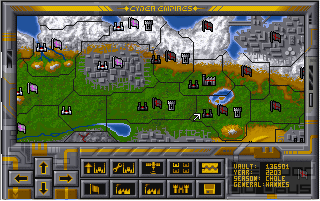 In fact, it is a fast-paced action battle: On a split-screen, each player takes direct control of one of his robots while the rest of the armies are given a generic command like “attack” or “hit and run”. A battle, as exciting as it can get, will never takes longer than one or two minutes - avoiding one of the common problems.

So the game's focus is really on the strategic level: Factories increase production capacity, fortresses can be constructed to be able to defend the territories better and this, of course, has an impact on the battles - as well as the territory type (city, plains,...). All these factors have to be taken into account for the choice of robots: There is no 'perfect' or 'best' unit. For example, highly destructive long-range rockets may be a great weapon on open terrain, but in cities, they lose much of their effectiveness.

It is these aspects which make the two levels of the game truly interconnected. They don't exist independently as it happens so often in the genre. Cyber Empires works - amazingly well. What's its secret in a nutshell? Not being too deep strategically: Options like diplomacy between the warring fractions are very limited, for example. Also, there are not even different maps which obviously hurts longevity. While it lasts, though, it is a lot of fun! 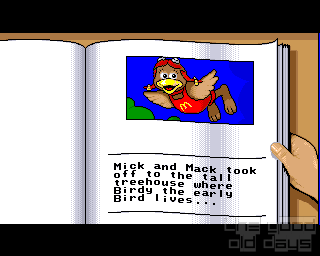