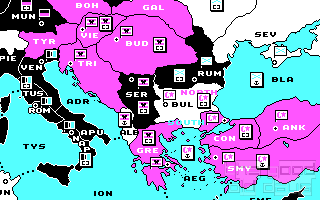 This is a conversion of a tabletop. As one of 7 Powers in a Europe divided in regions on the dawn of the 20th century you try to conquer as much as possible with your allies' help.

The rules have been adopted completely. The main point of them is that nothing happens by accident but everything can be calculated logically before. That means that nobody can use the excuse of luck/bad luck. Instead of that the attacking armies are compared to the defending ones. The one who has more wins. But more than one unit per area is impossible. In order to build a front line neighbouring countries have to support others.

This calculability forces the players to ally. You will get farther by arrangements but tough negotiations will take place before: “Ok, you'll get Denmark, if I get Holland.” Conspiracies and deception are of course possible.

There are only two different kinds of units: armies and fleets. Fleets can enter (apart from the sea) coastal areas. How many units a country can put up depends on the number of controlled “supply centers”. These are special countries which support one unit each. For this cause they are in demand while the rest has only strategic value.

The moves are written down by each player and then executed all at the same time. That is the cause that some really thought out plans fail because of even more tricky moves of the enemy.

The tabletop's disadvantage is mostly the lack of people. The advantage of the computer game should therefore be that the lacking humans are replaced by electronic enemies. Unfortunately, this aspect has been lousily converted. On the one hand that is caused by the fact that you cannot negotiate with the computer. So, an important, if not the most important, element is missing. There may be a certain amount of time for diplomacy but only for oral negotiations with other humans. On the other hand the AI is pathetic. The enemy seems to plan his moves randomly. Therefore it often happens that he does not support a basically safe country or does not occupy undefended areas. That is why it is easy for a human player to beat the confused enemy.

Nevertheless the game is worth a try. It is a good way to learn the rules and to try strategies in order to use them against humans later.

Not to be mixed up with the 1999 conversion.

A good game - but why couldn't they make it any better??? C64 version is way superior to this PC version!
BTW - I saw Diplomacy 2 on the shelves a few years ago. Never was a big succes. What happened? 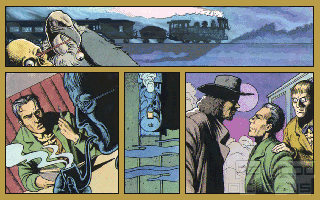