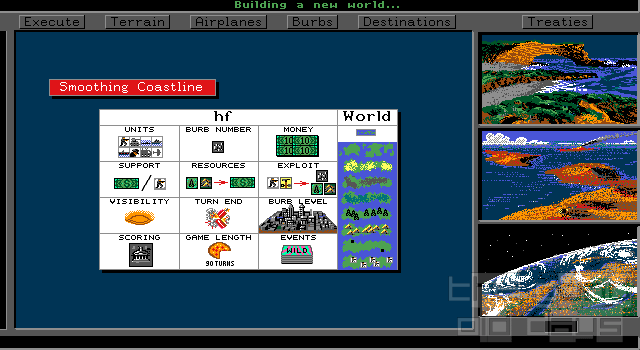 Global Conquest is an empire-type game, like the venerable Strategic Conquest: you move units to capture cities, with which you build more units, to capture more cities. Infantry, tanks, battleships, carriers, subs, planes, spies and “comcens” (king pieces) are the units. Sea, plains, mountains, swamps, forests and cities are the terrain types. Each city can support a limited number of units, or can switch off production in order to save money, which can then be transferred to a city near the front to speed up production there. You can tweak the scenario settings to have resources (oil and minerals) control the availability of certain units. The settings also determine how big the map is, how many mountains, how much land, etc. etc. Two flavors of random events are available, and several ways to play multiplayer, which is what the game is really about. The AI is nothing special and you'll have to handicap yourself heavily (also tweakable) to give yourself a challenge.

The interface is excellent. Right-clicking gives you a minimap on which you can select and direct units and view city ownership. Unit destinations can be set with waypoints and sub-options like blitz and sneak. Airplanes are a separate type of unit and can do paradrops, tactical and strategic bombing, and reconnaissance. One nice feature, which I've never seen anywhere else, is the combination of turn-based and realtime action. You set unit destinations, then click EXECUTE and watch your army swing into action for eight “clicks” of the clock. (Units fight automatically whenever they're in range). Then you give orders again. Airplane missions happen between the realtime turns.

There is no background story. As with all good empire-type games, the battle takes place on a randomly generated, arbitrary battlefield - it's pure war. You can even design your own icon to identify your side. In short, if you love old skool wargames, Global Conquest is for you.

Global Conquest is in my opinion the best empire-type game ever written. I love it! How do I love it? Let me count the ways:

The handling of the airplanes is excellent, and my single most favourite thing about the game. In most empire-type games, airplanes are treated like land units, i.e. they move a fixed distance each turn and then stop. Usually they have a fuel restriction which means that they have to return to base before n turns have lapsed. This means they hang in the air between turns. This is ludicrous, especially because ground units in empire-type games never have fuel or supply restrictions. GC's aircraft work much more realistically and can do more kinds of missions, including paradrops. A touch of genius.

The unit posture menus. You can order a single unit to go stealth or double speed or pursue an individual enemy unit or change supply sources. Neat.

The turn system. The damage bonus for flanking attacks. And infantry automatically digs in. And you don't have to build troop transports - land units convert automatically to boats at the shore. And they do it faster in a port square.

War films. You can actually watch a replay of your game with the orders phases taken out - You own private war film. Why all realtime strategy games don't employ this feature is a mystery to me. And so on.

Now I realize that a lot of the elements I've singled out above were introduced in Command HQ, but I prefer GC for two reasons: firstly, the smoother presentation and graphics. I realize these are old games but GC has a nicer “finish” than CHQ. Secondly, CHQ is tied to one well-known map and a handful of scenarios, whereas GC has a near-infinite number of customizable maps and no scenario. It is a “neutral”, abstract wargame that resembles chess , as the opening sequence suggests. For me this is a real plus. I don't care about most games' stupid scifi setups - it's like when Lego started having predetermined good and bad guys in their toy lines: *I* want to decide who's good and who's bad! Give me a neutral full-on war, like Global Conquest.

In a perfect world someone would be working on an updated version of Global Conquest, including Windows compatibility, an offline map editor, and black covering for unexplored areas among other necessary improvements. We don't live in that world, but we still have the original Global Conquest. I've played the game a lot and I used to own the manual, so if you have any questions about the game, feel free to mail me.

Global Conquest is a kind of sequel to Command HQ. The whole system is therefore quite similar. For more detailed information read this one's review. You start with one (or a few) cities and you have to conquer the whole world. That is (of course?) achieved by military.

But there are some differences. Now there are 4 groups which fight for domination on a randomly determined map. You can have temporary treaties, in order to watch your back while you are attacking another foe, for example.

The main difference is the turn-system. In Command HQ time was always progressing. Global Conquest relies on a more classical concept. It is based on turns. If everybody has given his commands, all are carried out at once. Additionaly you can activate a time limit per turn which does not make much sense when playing against the computer. Who can act as fast as a machine?

The economy system has been improved. Now there are mines and oil fields but compared to its predecessor it is not as important anymore. Both serves only for getting money. The reconnaissance by planes is more stressed instead.

It is mainly these differences that make Global Conquest a unique but worse game than Command HQ. On the whole it is still a guaranteed to be fun for month. At least it shows that the designers wanted to create something new instead of just publishing the same game again, like it is common today. 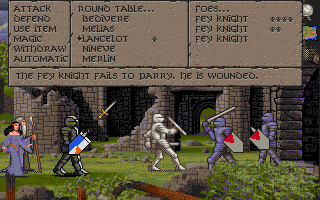