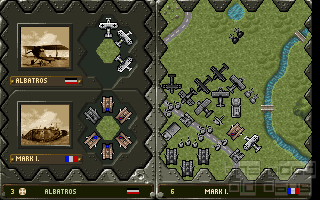 Battle Isle was a hit in the German speaking countries and had already received two expansion packs. It therefore suggested itself to transfer concept and technology to other scenarios and push them to the market. How about replacing science fiction with a historical conflict? World War 2 always being a difficult subject for German companies, the time machine was set a bit further towards the first one.

That one is primarily remembered for three things: trench warfare, chemical warfare and first relevant introduction of new weapon types, such as airplanes, tanks and submarines. Chemical warfare, yuck! Don't get burned by that! How about the first item? Permanent standstill, lots and lots of bloodshed fighting for few metres? Doesn't sound like something which will find a large target audience.

This leaves technical advancements in the course of the war, which indeed introduces some variety into History Line 1914-1918. Where the initial battles are all about infrantry, cavallery and artillery, early airborne fighters and bombers soon mix things up. On Entente side, tanks join soon after. Such aspects receive much stronger attention and relevance than in real history, but for good gameplay reasons. 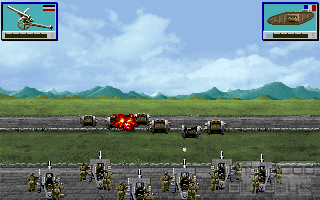 Specifically, this divides the scenarios into different phases accounting for different speeds of developing new technologies on both sides. The axis have air superiority for a long time thanks to their Fokkers, but on ground, they only have their heavy artillery standing against the tanks.

Talking about artillery, this is where the trusted Battle Isle phase system continues to shine. Turns being split into movement and attack phases, the medium and heavy guns take a full turn to get ready after movement. Thinking ahead is therefore even more important for them, because you really want them to still have good targets in range when finally ready and you don't want them to waste their shells on already escaped or destroyed enemy units.

This sort of tactical specialties are quite necessary to keep up motivation, however, because Blue Byte handled the war with kid gloves. Historical battles set in real places cannot be fought. Instead, you act on anonymous battlefields on which, according to the thick manual, the overall course of war is not decided. Whether you win or lose will not be reported in the nicely designed newspaper articles shown after the scenario. Instead, they talk about the way things went in the real world. Considering even Panzer General (which allowed changing history) was banned from regular sales in Germany shortly after, likely a good decision from a commercial point of view. 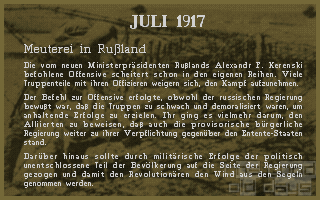 News of the world

Back on the topic of the manual, there is quite a bit of production value accompanying History Line. Archive photos show units in-game, but also inside the printed “weapons book”, listing all the relevant technical data per unit. The newspaper articles don't restrict themselves to the big picture of front lines, but even include small snippets such as sports results.

At the game's core, most of the system's known weaknesses remain. Specifically, an artificial intelligence is practically absent in serious terms. The computer controlled enemies rely on frontal attacks, not even considering differences in unit speed, therefore failing to launch a concerted offense. In spite of unlimited resources income over time, it constructs mostly useless new units. Switching to defense, for each scenario, there seems to be a small set of units hardcoded to defend the headquarters. The only danger for human players stems from the initial strong superiority in numbers. It is quite telling that although maps are reused when replaying the same scenario on the other side, but unit setup is not. Given a balanced starting point, the computer would never stand a chance.

In any case, most scenarios don't actually give the impression of strongly tactical warfare. The winning challenge is rather puzzle-like. Although you move virtual figures around representing military units, the key to victory is efficient movement in the first few turns. Planning this, there is usually exactly one “correct” way which the developers had in mind, as evidenced by exactly counted distances etc. Reading the battlefield correctly and realizing this intended plan, there is little risk of failure. 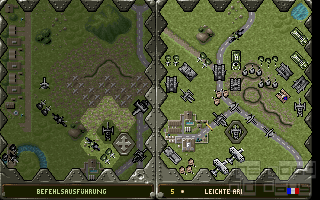 A few trenches at least

Trench warfare being impossible where artificial intelligence is involved, a couple of game options turn downright absurd. There is a depot construction unit, in order to have another location to repair units. Also, there are engineer units which can dig trenches. Though the front line is never stable long enough for this to make sense (save for very exceptions).

Theoretically invisible units such as submarines also cannot really be handled by the game engine. First, the split screen discloses their position anyway, though even resisting the lure to spy and also avoiding unintentionally catching something from the corner of one's eye, at the very latest, when moving your own ships, you will see which hexes are not available. Hm, “maybe” there is something already there, eh? On top, the somewhat efficient, but quite archaic joystick/keyboard controls certainly also wasn't up to date with player expectations anymore by late 1992.

Considering all, it is quite understandable that just the following year, Battle Isle 2 went different ways. Nevertheless, it is a pity that History Line was not further developed on that new baseline. Beyond the overdone second world war, there could have been potential for more. After all, personal thematic preferences within the target audience are manifold.

This was most likely supposed to be the start of a series of historical games based on the Battle Isle engine. At least the subheading “1914-1918” points to that. Because there were no sequels, History Line as a bridge between Battle Isle 1 and 2 was forgotten quickly. Wrongly as I think. After all it is still an independent (good) game because of its peculiarities.

The peculiarity of the engine is the fact that the game is supposed to be played with two people on one computer. That is done by a vertically split screen. Each player has his side where he can act. That would be useless if you nevertheless had to move one after another. Because of that the game is divided into movement and attack mode. The players are in different modes everytime. While one player is grouping his units and moves his reinforcements, the other one is giving attack orders and producing new material. In the ideal case (i.e. if both players need just the same time) there is no waste of time.

The units were designed according to the time and apart from ground units, which are in main focus, there are also planes and sometimes ships. Gradually, new war machines are invented. Both sides (Germany and France) have the same basic ones, but also individual, historically correct units.

You win one of the (fictional) battles either by destroying the enemy completely or by conquering his headquarters. Apart from this one, there are depots (to repair units) and factories (to produce) as buildings. It only happens seldomly that you conquer the headquarters, while the overall battle is still balanced or even bad for you.

An obviously weak point is the AI. The computer only relies on unplanned frontal attacks. This disadvantage should be compensated by mass superiority but that is only capable to result in an exciting beginning. When you have build up your defense and your units have gained some experience, it is only a question of time until the computer is defeated. It is at least an advance compared to Battle Isle that the computer not only uses streets. That proves that History Line is a two player game, again. If you have a human enemy, you can have very much fun even without a network here. Alone it is quite motivating but too easy. 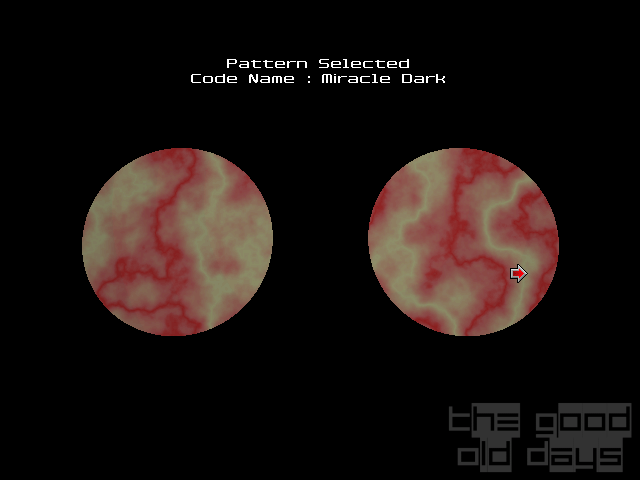