Master of Magic
for PC (DOS) 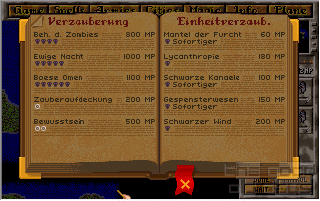 Master of Magic is the sequel to Master of Orion. If you had read my review about that (I know you didn't...), you'd know MOO is my favourite game ever. Of course I had huge expectations. But the game didn't fulfill them all.

I'm a fan of really complex games that are easy to learn at the same time. On the surface, Master of Magic is far more complex than MOO. Set in a cliché fantasy world, it adds a lot of stuff to the concept.

You can design your alter ego choosing from 5 different kinds magic (life, nature, death,...) and many special abilities such as 'warlord' which lets you have more powerful units or 'gold to mana'. And as if this wasn't enough to choose, there are also many different races which all have their advantages and disadvantages!

You may know from Civilization or MOO what comes next: Build up an empire starting with a single city. Instead of technologies, you research spells. There are two kinds of spells: The ones you cast on the map and the ones that effect battles. On the whole there a huge amount of them. They're of course divided into the five types of magic.

Your character predetermines your strategy roughly. If you have much talent in chaos magic for example, you'll get many offensive, deadly and destructing spells. And you'll use them to attack you opponents. But playing a magician of life is different! Your spells do protect your units and make your cities prosper. Why attack?

The disadvantage of this: The other sorcerers judge you mainly based on your kind of magic. That makes diplomacy (the strongest point in MOO) almost impossible most times. Really, really, really annoying!

Only two aspects of the game remain because of that. First the city developement. It's almost identical to Civ. You have to build single buildings. Unfortunately! I like it the way it is in MOO: Just giving general rules. Here, you have to waste too much time giving build-commands in the later game. A step back!

Second the wargame. And that's really what Master of Magic is about. There is an almost unlimited number of different units which you can either build in cities or summon them magically. Especially the latter ones are very cool. Everything from a simple weak skeleton to nasty demons who can summon even more creatures in battles is there.

Then there are heroes. These are single characters who are quite weak at the beginning. But gradually they gain experience and become the most powerful warriors. Heroes are also the only units who can carry artifacts, powerful magical items that add to different skills. On the whole, high level heroes are even a bit too strong. Sometimes they can't be hurt anymore at all. A bit unbalanced.

The battles itself are decided on a tactical map. You move your units around, attack, cast spells and so on. Citys can also be damaged during battle. So even if the defenders win, they can be weakened severely if they have to build up half of the city again!

Master of Magic doesn't quite measure up to its genious predecessor. But if you take it as a pure wargame, it's really great!

Master of Magic was the first strategy game of my life. I played it on my 486 with a 33MHz CPU (using the Turbo key enhanced this to full 66MHz) for the first time. It ran smoothly! ^_^ It was launched under DOS with the good old Norton Commander.

It is a turn-based strategy game. It begins by selecting a mage. There are some default configurations which are consistent (meaning they're suitabled for beginners). You can also define your own mage using a fixed number of points.


Sure, the configuration may take a little bit longer, taking into account all these options.

The game itself is then about building up cities. You have to juggle with limited resources (food vs. gold vs. workforce vs. mana). Choosing the buildings will sometimes influence the whole game. For example by building a library, you receive points to have your mage learn new spells faster (because just taking the spell books is not enough, you also have to study them). These are categorised, e.g. unit enchantments, global spells, summoning etc.

In the game, apart from regular units (and the summoned ones) there are also so-called heroes. These can be summoned as well, but also they offer their services (the more fame you have gained [for example through winning battles], the more will show up). Similar to Warcraft, they can be equipped with magical items. Some of them can also cast spells themselves, useful in battle.

Gameplay is done on an overview map, battles are zoomed in. Here, you can control each individual unit and cast magic spells. If the capital falls, the mage falls.

Because there are so many small tweaks (not to mention the difficulty levels and the number of opponents) which can be changed, the game doesn't get boring. Due to the many small aspects which are all interconnected, there are always new things to discover.