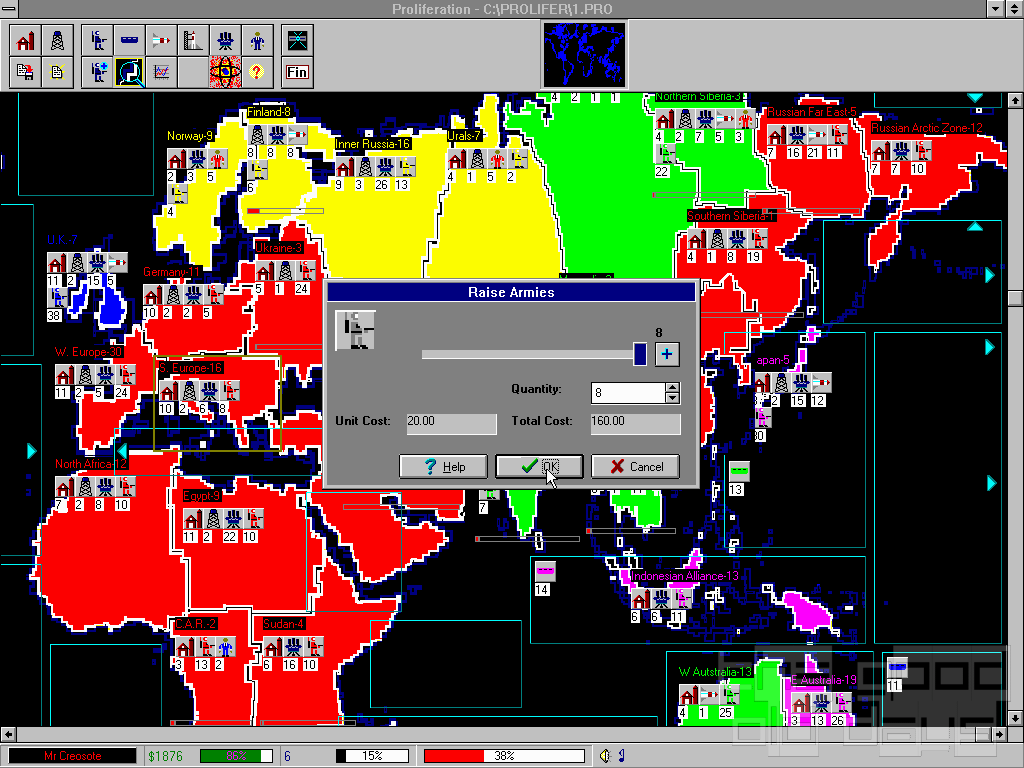 The “Treaty on the non-proliferation of nuclear weapons” was signed in 1968. It was the attempt to stop all the small countries from gaining access to nuclear weapons. Only the five major 'official' powers were allowed to own atomics: the USA, Great Britain, France, the USSR and China. So this treaty secured the monopoly of these countries to nuclear weapons.

But as many treaties of the United Nations, this one of course represents the world's situation after the Second World War. Even when it was signed, it wasn't really fair to the new-grown powers anymore. So more and more countries just developed a nuclear arsenal 'illegally' – sometimes with the approval of one of the major powers (e.g. Israel), sometimes without (e.g. Pakistan).

So much for the historical facts. This is where the ficitional background story of Proliferation starts: being in urgent need of money, some states of the former Soviet Union sell their nuclear weapons to rich third-world countries. The 'official' powers panicked and tried to occupy those. But they found tough defenders! The new powers used tactical nukes, the others responded with ICBMs. After that, all former alliances fell apart, everyone just tried to get a good basis for the upcoming world war…

And here the game begins. Each player starts with a selectable number of regions under his control. At first, the map reminds a bit of Risk. And the basic concept is of course the same: send armies to adjacent regions and occupy them. But in fact there's a lot more in Proliferation.

First, there are the normal armies. But those already existed for millenii before. In this time, nukes dominate the battlefields. This type of weapon is split into tactical nukes (for kind of 'everyday use') and Intercontinental Missiles (ICBMs). Tactical nukes can kill normal armies. But the defender can shoot them down before they can do any harm with stationary devices. ICBMs take one whole turn to get ready (and it costs money to have them ready). They can also be shot down by defense satellites. But in both cases, the offensive weapons are a lot cheaper than the defense against them.

But it's of course clear that all kinds of nukes cause radiation. Tactical ones less (and limited to the region they're used in at first), strategical more (directly into the atmosphere). The local level of radiation influences the living standards in the regions. At the end of each turn, part of the local radiation is blown into the planets atmosphere. And this global radiation level influences the circumstances on the whole earth.

So much for the military aspect. But where do the soldiers come from? Who constructs all those nukes? The population in the regions does. Each region has a specific, but not static amount of inhabitants. The more people, the more they can build each turn.

But people need food to survive of course. To satisfy the demand, each region produces food. Some more, some less. And by investment, you can also try to increase this amount. Another thing which is produced in the countries is oil. Oil is needed to move armies, to shoot nukes and so on. Both food and oil can also be bought and sold on the world market.

I could talk on for some hours now and still all I could cover was only a fragment of the game's complete dynamics. Everything is perfectly balanced, one action causes the other – everything is cross-linked. And that's what makes this game so great: it's a perfectly thought out system which takes a whole lot of different things into consideration without anything being 'outside' or useless. You need a overall strategy to win. Small victories on the battlefield prove to be only temporary very often if you didn't consider the rest of the world and other components' influence.

If you know the tabletop Supremacy, you'll encounter a striking resemblance here. But Proliferation offers even more than the already complex tabletop. It uses the opportunities of the computer intelligently to make the game less static. Nothing remains the same for more than one or two turns. Panta rei – this is the perfect description of what happens in Proliferation.

Another remarkable aspect is that the game is freeware. At first, it was shareware, the trial version was limited to three players and there wasn't a save option. But later, Silicon Commander Games decided to release it into public domain. That's a great step, I wished more companies would do that. In fact Silicon Commander released all their older games, and they have some really interesting new shareware titles in developement – so be sure to check their site out. It's really one of my favourite companies. Almost all of their games are of extremely high quality. Proliferation is their masterpiece though. And if only the AI would be a bit more challenging, it would have deserved the perfect rating.

Sidsayian:
the game is good and old style and hard to get on the pc version now but i will try it out once again
Enzel:

One of my all time favorites, with a clean and simple interface. It's a tricky balancing act.

With enough food, your population may outgrow the food supply and you'll face famine. Without enough food, they'll starve and you won't be able to afford more.

All modified by radiation deaths, of course. Defend your territory with tacnukes and although you may save it, you'll lose your people with the radiation.

Build up a big conventional military, and the cost of maintaining it can become a problem (as your income can be reduced by the global radiation increases from other factions fighting). Use it or lose it. 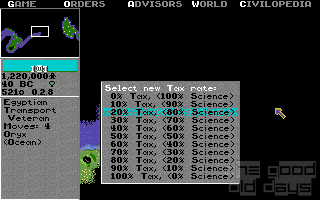