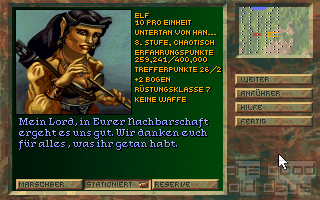 The early 1990s may have been a great time for new games, but they were awful as far as historical awareness was concerned. As often in still emerging forms of art, everything which came before was considered somehow embarrassing and worthless. Computer game design and production was considered a one-way street, always getting better and better. So why look back? A change of mind concerning this “bigger & better” paradigm has only occurred much more recently.

Consequently, when Stronghold was released in 1993, no reviewer remarked on this being designer Don Daglow's return to his roots. The very man who single-handedly founded both the “sim” and the “god” genres with his seminal Utopia back in 1982. These days, being more aware, this surely warrants a deeper look, even if at the time, Stronghold turned into an ultra-obscure commercial flop. 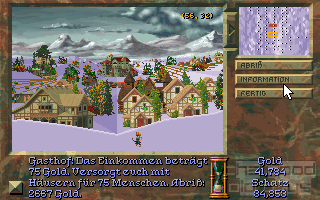 Also one of the less straightforward titles released under SSI's expiring exclusive D&D licence, Stronghold is best described as a fantasy city building simulator. Starting from a central fortress and few inhabitants, the goal is to build up a thriving community which can consist of one or several of one of the ruleset's classes (fighter, dwarf, elf, magician, cleric etc.).

The randomly generated map is split into squares, each of which can be claimed by any unit and subsequently have buildings erected upon. Basic ones, such as living quarters, storage houses or fields, are common among all classes whereas each also has some unique ones or receives bonuses for some. Dwarves, for example, have a higher chance of finding valuable ores in rocks. Following a Sim City like logic, once a balance between available living space, sufficient income and available food has been reached, the population will grow, enabling further expansion.

At some point, monsters will enter the picture. Also based on the typical D&D set, some may be sort of civilized, also building structures and maybe not even being all that aggressive (unless provoked) whereas others may just attack on sight. Depending on the player's selected goal (roughly speaking: defeating enemies or building a large empire), such clashes may take a more offensive or defensive direction. 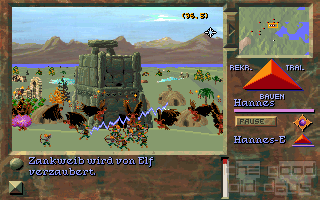 Interestingly, instead of the genre default overhead view, Stronghold displays its world in a three-dimensional perspective. The approach is similar to Lords of Midnight insofar that those windows into the world are as real as it gets: instead of just showing the current map square pasted on a generic wallpaper, all further squares are also visualized in the background, including all their buildings and landscapes. This proves not just a visually attractive (even different seasons are represented graphically), but also useful approach, as it helps locating specific places. This, however, is unfortunately actually needed, because in general, overview is hardly perfect. Special buildings to trigger an effect or to be upgraded cannot easily be identified through the otherwise quite useful statistics screens.

This is because after the initial, very motivating phase, the game suffers from the long endgame, as many others in this and related genres. At some point, it is simply obvious that the player will win, no matter which goal has been set. Nevertheless, the game will drag on and on until it officially happens, because there will still be so many small steps to take.

Stronghold makes an honest and quite imaginative attempt to reduce the amount of micromanagement in such later phases. For instance, new units can default to simply claim new squares and perform a couple of default building commands. This keeps growth running at least to some degree while the player is not paying close attention, requires a good basis of extra food storage for winter (when harvest drops) and gold income, though. 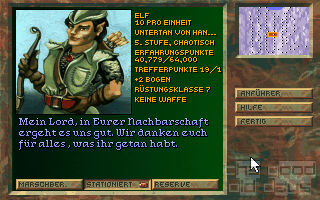 Performance feedback from the subjects

Army movement takes some getting used to, but it's actually quite an ingenious system as well. Instead of ordering each individual unit around, the player simply sets the amount of units to be moved to a specific place. Units then answer automatically based on simple criteria. Sure, this sometimes sends a low-level unit right into battle erroneously, but at this point in the game, such small fuzziness can be afforded easily.

Other comfort functions are sorely missed, on the other hand. Setting priorities of recruiting, building and training per map square is a good idea, too. This way, the player can put a different focus per region. Pour all effort into building in new quarters, set up a military training ground elsewhere etc. Though honestly, what's the use of doing it in exact percentages? Only few discrete settings really make sense – and also, a batch definition for many squares at once would have helped significantly.

In retrospect, the only way for me to really finish a game turned out to play as a chaotic character (goal: defeat all enemies). Although actually destroying all enemies also takes long and it's not really very exciting, it is at least not quite as boring as just being forced to expand further and further and further, although the enemies won't be able to do serious harm anymore against the player's large power base anyway. On the other hand, fighting wars isn't really much fun anyway. So playing chaotic, i.e. warmongering goal, but then playing peacefully until a good base has been built, was the way to go for me ironically. I strongly doubt this was the designer's intention. Meaning something must have gone wrong in the design process. 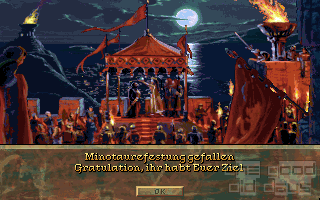 The winning screen is not exactly worth the effort

Daglow identified the tedium of micromanagement as a major issue and took steps to work against it. Some work rather well, some not so much, but overall he had really good ideas. While working out a way to avoid negatives in the endgame phase, it seems, however, he forgot to spice the same endgame with positives. Meaning the players don't have enough fun things to do anymore, even if annoyances are mostly avoided.

Nevertheless, make no mistake: Stronghold can be a lot of fun in its initial phases. Whether you play with just one character class or a whole “party”, it doesn't matter much. Growing the cities, slowly transitioning the gold income from farms and mines to more reliable sources like markets and manufactories, building up initial defenses – even as a sandbox without any monsters, this would just work. Once you feel settled in your position, you can be comfortable about potentially just ending the game and starting a new one, as finally variety of buildings etc. is not sufficient to fully sustain motivation until the very end.

Now this game truly deserves to be called 'Real-Time-Strategy'! But if I called it like that, most of you (the readers) would get a completely wrong idea of what it is like because this term is being completely misused in my opinion. Games like the Command & Conquer or Age of Empires series don't require much thinking. It's all about speed! And even if it was different, the word 'strategy' would still be wrong because it would mostly be tactics then!

But Stronghold is a real RTS if you refer it to the basic meaning of the words. You build up your empire in real-time. The point of view is quite extraordinary: it's in 3D! The map is divided into squares and when you choose one, you get a panorama view over the landscape. Conquering is done by sending inhabitants to other 'screens'. Arriving there, you command them to build up some buildings. There a vast variety of those, so there's much to explore and try out.

You have to keep an eye on your gold reserves, the number of houses to live in, food supply and much more! If you satisfy all the needs, your popularity will rise and your population will grow. That is the key for winning the game.

A D&D-background is used, so everything is fantasy-related. There are different races. I'm not familiar with the D&D-rules, but it seems a bit strange to me to find 'Dwarves' as well as 'Fighters'. Well, I don't think Fighters are a 'race', more of a character class maybe. And can't Dwarves be Fighters as well? That doesn't spoil the fun, but it's still strange...

But what would a fantasy world be without evil monsters? Nothing! So these are also implemented. They are divided into intelligence-groups from extremely dumb, i.e. they are just running around wildly (e.g. giant ants), to extremely intelligent, i.e. also building up structures and more organized. The most genious of the foes is 'Mindark' an evil sorcerer. But for some reason the relation between intelligence and strength seems to be antiproportional! Mindark is a wimp compared to stupid creatures like huge scorpions or bats! Keep that in mind when choosing the enemy's intelligence...

Another special point is the way you control your units. You just move a pyramid on which each side represents one of the three possible tasks (building, training or recruiting) to set what the people staying in this screen should do in percentages. So they can do everything at once, but it's not as efficient then. This works quite well. Moving units is a bit annoying though. Instead of just ordering units to march, you have to set 'magnets' on the screen you want them to go to. But only units set to a certain 'move- mode' will react.

On the whole, Stronghold is a good game but nothing spectacular. It's sure fun but it doesn't blow you away...

This is easily one of the best games I've ever played.

It gives me great memories from 10 years ago, sitting down in front of the computer after school and just getting involved. This is truly a thinking person's game.

It also just goes to show you how much SSI ruled as far as the gaming world was concerned back then.

I still have my original copy, but happened to run across this site when looking for cheats.

Keep up the good work, all of you. 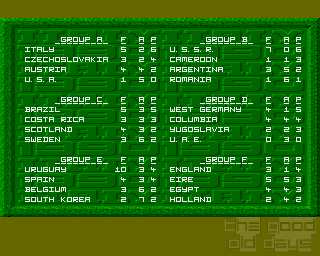