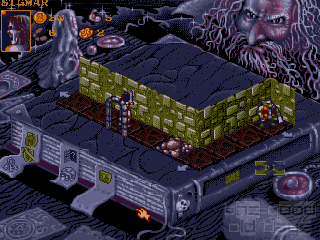 Ah, Hero Quest... We all spent countless hours playing the board game! I still remember the christmas in Hotel Dorint in Hameln when my brother got it. We spent half of our time there playing it. Of course we were genious enough to use the blank map to create our own quest with a permanent and water resistant pen. And the rest of the time we played.... ummmmm...... hockey in the corridor! But back to Hero Quest.

It's a very simplistic RPG. Simplistic because it's not pen&paper based, but it takes place on a board. On this board plastic figures move around. Each 'hero' is controlled by a player and all the monsters by the master. This master also handles the events like traps or the outcome of treasure hunting. And he has the most workload because he has to put all the pieces of furniture on the board

This (mostly) boring position is taken over by the computer here of course. Up to four human players can participate because there are four character classes which can only be used once at the same time. Each character has a special ability. The barbarian is good at fighting, the dwarf can disarm traps, the elf is an allrounder who can fight but also cast some spells and the wizard is a wimp full of magic.

Together (or on their own) they have to fulfill a number of quests to drive an evil sorcerer off the country eventually. But especially the first tasks hardly have any real link to this. But who cares about such a stereotype story anyway?

The expansion disk (which can also be used as a stand-alone game) adds new missions and nothing else. And these missions are aimed at developed characters - so don't start with them but play the 'regular' campaign first! Otherwise you'll find yourself kill in the very first room...

On the whole, Hero Quest is a nice and simple game. It may not be suited for RPG-freaks. But beginners and fans of the board game will like it because it imitates the original version almost perfectly! And the multiplayer option is especially well done because the characters don't have to play all the missions together, but can go their own ways partly.

Thanks to dlfrsilver for the manual and OddbOd for figuring out the copy protection codes!

T-Pow:
Originally posted by Wandrell at 08:56 on December 5th, 2008:
Well, here in Spain Space Crusade was "Cruzada Estelar", which translates for Stelar Crusade. But Heroquest was kept as Heroquest, and all the other Games Workshop games I've seen also kept the english name, like Space Hulk.

Mr Creosote:
Hero Quest (being called Hero Quest) was a huge commercial success in Germany. I've never seen any board game being that wide-spread. I guess that was the incentive to retitle for Space Crusade as 'Star Quest' - hoping people would jump on it by association.
Wandrell:

Mr Creosote:
Oh, I liked playing the Master, too, but when I created my own levels, I never did much in the course of story, but instead tried to spice up things with small puzzles which the players had to solve (very basic things, admittedly, like hidden passages, levers or objects which had to be found and used elsewhere). That, in my opinion, brought some much-needed flexibility to the limited layout of the board.
T-Pow:
Haven´t I mentioned, that I mostly played the Master because I knew all levels. For me it was great fun!
Mr Creosote:

Wandrell:
You mean Space Crusade? My father had both Heroquest and Space Crusade, which was another tableboard game made from the same people. And there is a computer version, I have it around and is one of these ones I thought about reviewing more than once. If I'm not mistaked there is a CD version also, but I don't know if comes with extras or not (probably just voices, music or something similar).
T-Pow: 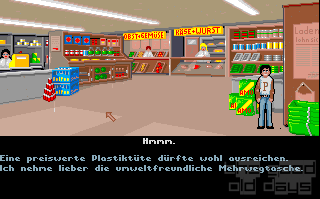