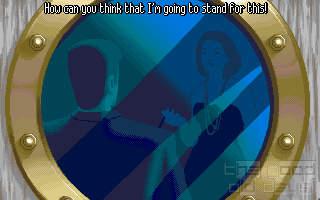 Taking one of the most thrilling concepts of an old genre and combine it with the modern attributes of current computers. That is how Cruise for a Corpse can be described best. The conclusion at the beginning of a review? Well, I thought I could do it a bit differently than normal sometimes

Cruise for a Corpse is a direct offspring of the classic detective subgenre of Interactive Fiction: You (Inspector Raoul Dusentier) are invited by the millionaire Niklos Karaboud (in case you're wondering about the strange names: this is a French game....) to a cruise on his sailing yacht. Of course, there isn't much time to relax because already on the second day, Niklos' head is being smashed...

In the tradition of classic games like Deadline, Suspect or Witness, the setting is reduced to a certain surrounding (the ship) and thus the circle of suspects is limited. So it can't really be all that hard to find the murderer, can it? Just check every cabin and the one with fresh blood on his hands is the murderer, right? Wrong! Since this cruise is only for family and close friends of the victim, basically everybody has a motive! Some more obvious, some connections have yet to be uncovered by your research.

What does Hercule Poirot normally do first? Examine the scene of crime, sure. But after that? Right, question the suspects! And better do it quickly before they can all coordinate their stories.
This is what takes up the main part of the game: ask the right person the right questions at the right time. Yes, even the last point. The game takes place in a sort of pseudo-real-time. That means your time is indeed limited, but the clock only advances (always in intervals of 10 minutes) when you've done something important. Now that sounds as if you couldn't run into dead-ends, but that's not true, either. While you can't get stuck by just standing around doing nothing (because time doesn't pass then), you can get stuck by doing right things in the wrong order (because then you'll miss other important stuff). I know there are many people who don't like that, but that's the concept of the genre - either you like it or not...

Unlike its predecessors, Cruise for a Corpse is a mouse-driven graphic adventure though. The cursor alerts you when you touch something important, a click opens a context menu with specific verbs for this object. Not as static as Lucasfilm's or Sierra's system. A right-click opens your inventory and gives you access to a few more, non-object-specific commands.
That great system saves the menu and thus gives you full panorama view on the stunning graphics! The game combines beautifully hand-drawn backgrounds with computer generated characters made of vectors. That ensures smooth animations and saves a lot of disk and memory space compared to pixel sprites, too. Ok, this technology wasn't all that much perfected then - especially the player's sprite doesn't look all that great. But at least it doesn't fall apart into some huge undefinable pixels when the player moves near the 'camera'!

The graphics alone would be enough to get you addicted, but even such beauty wears out after some time. The only thing which can make you stay is a good plot. And Cruise for a Corpse does have one! It catches the 1920s athmosphere quite well, both by graphics and characters. The conversations (which indeed take up most of the time - I've warned you!) are mostly written in an ok style, even though some comments are a bit brief. The only real problem with those is that old topics aren't removed from the topic list, but new ones are being added all the time. So after finishing about half of the game, you certainly will have lost overview of what you've already asked whom - and therefore be forced to go through old dialogue again.
The best thing about the story is something else. It is not as one-dimensional (i.e. everything completely focused on this one murder) as one might expect. There are subplots, some related, some unrelated (to lure you into a false direction....). That's very well made and quite believable - even if all the killing gets a bit out-of-hand in the end

So..... is the murderer really always the butler? Find it out yourself 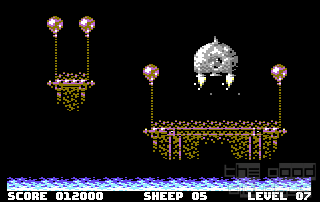