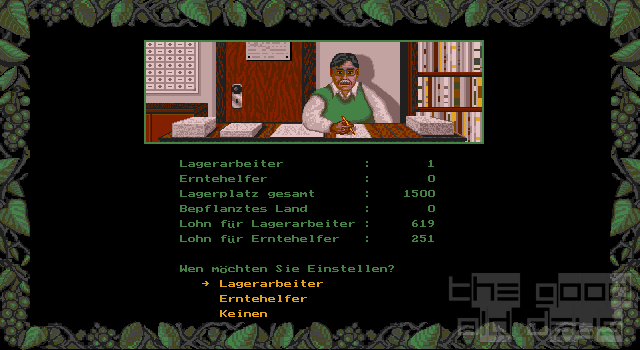 Meanwhile, german game desginers have adapted to their foreign idols and they only produce 3D-Action and Real-Time-Strategy now. That is a pity, because some really innovative german concepts were lost. But the majority of "german" games was pure mass production. Only a few years ago there were games of which you could both graphically and from the content say that they come from Germany. A very typical example for this is "Winzer" which means wine-grower.

It is a dusty economy simulation about wine-growing. By text menus you get to different places where you can do more or less important things. You should write down important things manually, because you in the screen "overviews" you loose just that. From planting, harvesting and bottling to selling, you have to do everything alone. There are always several ways and possibilities. You can for example let the grapes ripen some more, but (illegal) sugaring has the same effect. Just like that there are different regions, grapes, wines and international markets. So there are a lot of things to decide and try on the first look.

"Winzer" is here just as an example for huge masses of similar economy simulations which were produced by german companies in the early and mid nineties and never reached other countries for a good reason. It is obvious that new funny concepts like Mad TV definately internationally appreciated, while "Winzer" and his colleagues disappeared fast even in Germany.

The question which are the typically german games today still remains. The way I see todays sales statistics, it is the so-called "build-you-own-community"-games (like The Settlers) that are a kind of successor to the number-driven-simulations. Again, a basically good genre that is cloned to death...