Shadow of the Comet
for PC (DOS) 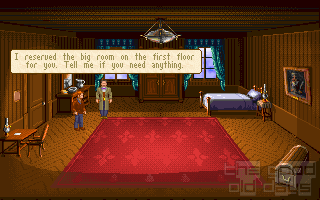 The village of Illsmouth. A town hall, a post office, a tiny harbour and a few houses. Nothing special really, it's like the epitome of a comfortable hood, none of the modern-world related problems occur here.

For astronomers, the village has an interesting history though: it is the spot from where Halley's comet can be watched from best. Last time this comet came near earth in 1834, the scientist Lord Boleskine did exactly that - and he went mad for unknown reasons.

Now, 76 years later, you, John T. Parker, working as a journalist for a big newspaper, are sent there to take some photos of the once again coming comet and write a report about it. Arriving in Illsmouth, you're warmly welcomed by the mayor and the local doctor who has offered you to stay in his house for the next days. The sun is shining, the birds are singing. Citizens are happily walking along the streets. But the comet is approaching and it's already beginning to drop its shadow...

If all this sounds vaguely familiar to you, you're at the advantage. Like Alone in the Dark before, Shadow of the Comet is based on Howard Phillip Lovecraft's Cthulu cycle. And (in my opinion at least) it succeeds better than the earlier action title to catch the atmosphere of the books.

I'll try not to give away most of the story already, but an ancient cult who worships evil gods plans to use the constellation of the stars caused by the comet to enable their gods to once again rule earth. You'll discover the secret of the village, of some of its families, their seemingly immortal 'guru', undead corpses living in their crypts and finally even old shrines filled with monsters which have survived since the ancient days.

So Shadow of the Comet is a serious horror adventure game. It does have some humor, very dry and mature - positive. The storyline is well developed, the suspense slowly rising. Just as it should be.

What's especially worth mentioning is that the designers tried to 'emulate' the village life as accurately as possible. The shop of course isn't open all day. Go to the town centre at the right time and you'll find a band of gypsies giving a concert. Sometimes, support characters just seem to 'decide' to go for a walk through town or in the woods.

In fact, there are of course no random factors involved (even though that would have been interesting...). When you play the game from the start for the third time, you'll notice the same things happening again which you've already seen. But it is certainly a step in the right direction.

A few 'unimportant' subplots are based on these happenings. Parker seems to represent the lure of the 'big world' to some (especially young and female) characters. Unfortunately, you can't explore those enough really - at some point, they just break off (or has anyone ever succeeded in visiting the young lady and her aunt for tea after they invited you?). Again, a very good idea, but not consistently followed.

Technically, the game uses the same engine as all of Infogrames' adventures of that time (see Eternam). The graphics are drawn very nicely, the sprites look a bit blocky though. Controls work via keyboard: you walk around with the cursor keys and activate commands either with shortcuts (first letter of the command) or via the menu (press TAB). Works fine apart from the annoying 'line-of-sight': to discover objects, you have to walk around until a line from your eye to the object appears - only then you can manipulate it. Overall a good engine.

The puzzles are mostly logical and fair, but not too imaginative. Apart from the very beginning (when you are truly 'free'), it's always pretty obvious what your next goal is, the games gets more linear with every 'day'. It feels a bit as if the designers had to rush it and had to concentrate fully on the main plot

There are a few action scenes, but those don't require any real reflexes from the player. Adrenaline is guaranteed though

Atmosphere. That is what makes the game a classic. It just succeeds to glue you to the screen - right after meeting the first few persons, you just have to know what will happen next! And then there's of course the whodunit-factor: who is involved in this conspiracy? Who is behind it? What exactly is their plan? You'll find out - but be prepared for a 'horrific' ride!

Trivia: In 1994, Infogrames published an 'enhanced' CD-ROM version of Shadow of the Comet. It features full speech and mouse control. The latter is done so awful that I don't want to talk about it! In addition, the CD contains a stand-alone program called 'A visit in the Lovecraft Museum'. Like in the game, you can walk around and examine the exhibition. Nice. Opposite to Infogrames' claims, there are no new characters, puzzles or dialogues.

if anyone likes this game, "Call of Chtulu" or "Prisoners on Ice" or something is from the same series.
this one definately makes your skin crawl. 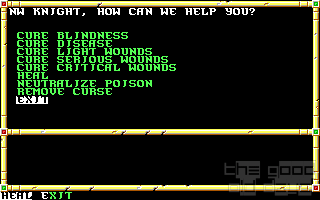