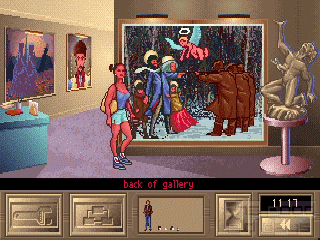 Drugs, snuff videos and a political hardliner conspiracy against the government – the latter having quite a topicality at the time of release. The newcomers from Cryo could hardly have aimed much higher in their first release. Though behind this new company name, there were a couple of well-known heads at work (previously known as Exxos) who had already become known for highly unusual subjects and game designs in the 1980s. Just that then, they had been moving inside the fantasy and science fiction genres.

KGB, on the other hand, initially sets itself in the reality of the day. Inside the notorious secret service of the Sowjet Union, Gorbachev has established a department for internal investigations, with the mission to fight corruptions and power abuse. As an agent of that department, the player finds himself in the middle of a conflict between a population intimidated since decades and wary colleagues, when he is tasked to look into the murder of a private detective. This case, of course, quickly leads down into the seediest corners of society.

The noir-y political thriller, spiced up by several elements of dime novels and eventually even somewhat fantastic elements most certainly is the game's biggest strength. The remarks and descriptions given by the protagonist, written with dry humor, lead to a certain distance between him and the player, putting the latter into the role of an outside observer rather than a real participant. At least outside some nail-bitingly tense scenes, such as the boat ride or the removal of a body from the hotel room. 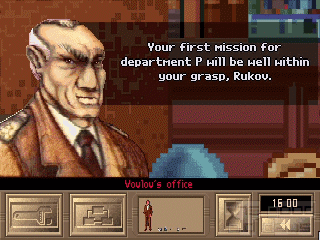 It is nevertheless not easy to be the spectator here. The plot complexity would even make Raymond Chandler blush. Groups and characters are manifold and somehow, nobody likes anyone else, meaning everybody is backstabbing everyone else. Even within the same organisation. The nicely drawn portraits help immensely in making associations with characters. The largest chunk of plot is carried through dialogue by third parties, however, and each sentence is stacked with names. Even up to the point where the game commits the cardinal sin of storytelling by giving two actors the same first name. It is hardly imaginable how one is supposed to keep an overview of all of that without handwritten notes, or even with.

The CD re-release (re-titled Conspiracy) attempts to mitigate this a bit with the support of Donald Sutherland. The coarsely digitized actor, portraying the protagonist's dead father, occasionally whispers some hints into the camera. Usually, it doesn't help a whole lot, though, and in the big picture, it turns out rather irritating, inf act. The opportunity to ask for a hint is permanently available, but it is almost always answered with non-helpful standard responses, turning it into a waste of time.

This, in spite of help really being necessary. KGB makes no compromise on its storytelling. The player's tasks are well embedded within the sleuth genre. Interrogations and other dialogue aside, it is a lot about observing, eavesdropping and keeping out of sight. Snippets of information have to be combined into a big picture in the player's mind. There is no supporting game mechanic. The game regularly quizzes the player on his understanding in multiple choice style. Blind brute-forcing without actually understanding is virtually impossible. 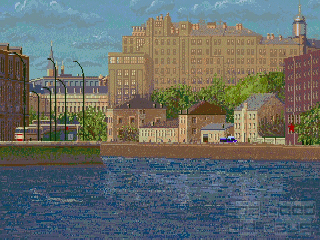 Though even to just reach such intermediate quizzes, the player has to tread carefully. Exactly according to the script. Any meandering or too long delay compared to the intended solution will not be tolerated and ends either in death or transfer to Siberia. Some scenes narrow the corridor so much that a single wrong step immediately ends the game.

Meaning the game is about optimising. Once, concerning the actions to be taken, twice about time management. This is well established within the detective genre and previous genre entries showed how it could work. For sure, several attempts are needed to try things, learn from previous mistakes etc. The built-in rewind function, repeating the last couple of actions, proves invaluable.

Though [self]KGB[self] takes all this to new heights and in places too far. Particularly when player knowledge which the protagonist simply would have no chance of acquiring is actually necessary. How would the protagonist know to strategically place the cassette recorder before going to sleep, unless the player already knows that he will be ambushed in the night? Why would you want to open the window of a bar next to a warehouse you're going to infiltrate? 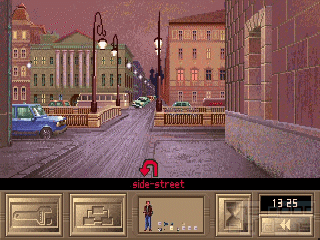 At least, the game has the decency to limit the player's search space drastically. The game being split in small chunks is actually the only thing enabling a solution at all. If it let the player travel freely between cities and to various locations in each, there would be no way to find the tiny traces of plot progress. Although dead ends are rather common, they at least reveal themselves rather quickly. Though then, this limitation of player freedom is actually just a workaround for the underlying fundamental problems in game design.

Whether you would like to fight your way through this really depends on your own priorities. On some occasions, the game even manages to amaze with respect to what it gets out of its core puzzle mechanics. But then, what really stays is its pickiness, the endless ways to fail. Rising frustration may lead to diminishing attention to plot details, which, however, the game expects.

It could be said that just like in a Chandler novel, the actual detailed plot resolution is not the point. It is all about showing this bleak, decaying society, isn't it? That must be the way to understand it, and in this way, KGB's storytelling approach works. As an experiment to cram a statically written story into an interactive game format, it is defective in many respects.

It's the last days of the Soviet Union. Gorbachev has destroyed part of the old structures. But as always when there's change, there are groups who want to take advantage of it. For some, it doesn't go quickly enough, some want to go back as much as possible. And some of those aren't all that peaceful about it...

Even the KGB can't escape this change completely. You, Maksim Rukov, are part of the newly formed anti-corruption department. And you don't even have time to wonder why you're moved there, because your first assignment is due: investigate the murder of a private detective.

This is of course only the start of a bigger plot and soon you find yourself alone against the old communists who have some plot to turn back time.

KGB is made in typical Cryo-style (see Dune). You see the settings in first-person perspective. There is a map which helps you if you're lost. Object manipulation is done via a standard menu and there's an 'intelligent cursor' which not only notifies you when you touch a significant object, but also proposes a logical action.

Most of the progress is done via dialogues. Ask the right questions at the right time and you'll be successful. Sneak after the right people and listen to their conversations (and tape them), and you'll learn crucial information. Classic investigator stuff.

But that leads us to the biggest problem of the game: it works in real time. Each of your moves is mercilessly counted. If it all takes you too long or if you choose to visit the wrong place at some point, you've lost. And worst of all: you sometimes only notice this a significant amount of time later (read: when you've already overwritten your saved game again)!

That results in a pretty lame playing style: first you try to find the correct path (as usual), but when you've found it, you restore a position at the beginning of the scene and do it all as quickly as possible. Highly annoying, but how should you know if you haven't wasted too much time otherwise?

Another huge downpoint is the weak writing. You meet so many people and visit so many locations - but most of them only once briefly. But you're supposed to remember all the names at once! And while the story is basically not that complex (the usual conspiracy...), I never completely got it - for the simple reason that I couldn't distinguish between all these faces and names which are all so alike.

Unfortunately, these disadvantages make the game nearly unenjoyable despite the interesting theme and some nice scenes. It may be realistic to have so many locations, people and different groups, but for the sake of game design, less would have been more in this case.

Trivia: There is a CD-ROM version entitled Conspiracy which features short cut-scenes of Donald Sutherland playing Rukov's dead father. He's giving you a few hints and is basically trying to connect the disjointed parts of the incomprehensible story. The technical quality is less than poor though (interlaced mode, but more black than actual film), and they don't help understanding much. At least I still didn't get it all even after playing this 'enhanced' version...

Theowne:
Lol. As you can tell from this review, this game is not for weak-minded. Be prepared to put some thought into it.
bob:

You can't remember the names?What dont juste take notes?And I dont understand how you can be confused with the faces, there are all quite unique.
You say real time is the biggest problem of the game???It what make it feels realistic.
I think you just cant appreciate this game for some reason, so please dont review it.

I highly disagree with you, i think this game is one of the best (though also the hardest) of adventure games.
It is hard like hell sometimes, took me about 2 weeks to complete, but i really enjoyed it. 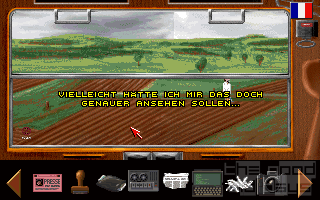