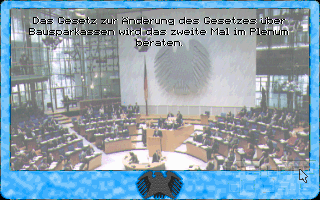 This is a very special promotial game. It doesn't advertise a product or some company. It doesn't tell you 'buy this'. Or in fact, it does the latter. But in another meaning: it's political propaganda! And it does try to convince you to 'buy' all the stuff which is said there...

So what does this game promote? The German political system. Each player has to get three bills to become laws. To do this, the cute bill sprite has to (literally!) walk through the different stages it has to pass: the parliament, the commitees and so on. At each stage, a little game waits for you. Either a quiz about the political system and its history or an arcade sequence.

The questions are mostly very easy, every German with at least a bit of education should be able to answer those (e.g. "Who's electing the chancellor?"). But seeing the general level of stupidity everywhere all the time, I guess I have to take the last statement back. The arcade scenes include Breakout, a labyrinth and some more. Here, the controls do their part on the difficulty level. It could be related to my (too fast) computer of course, but some are just impossible! Normally they shouldn't let you lose completely though.

Insiders will already have had an idea after the last paragraph: Gesetzgebung was produced by the notorious Glamus Software. If that doesn't mean anything to you, they made a few more strikingly similar games, all dealing with political propaganda.

The game was most likely meant to be used as an educational game for pupils. And it isn't that bad for this purpose. Sure, the quiz questions are too few, even with the second bill, they already repeat themselves. But this way, it's easier to 'learn' - the game is not flooding the player with unlimited information, just basics.

The real problem with achieving its goal is obvious though: 1994 was the beginning of the 'intermediate years' after which kids (i.e. the pupils) began to be interested solely in 'kewl ego shooters'. A 'dry' game like this is so 'uncool'! Without force, the target audience is unlikely to touch it. And most schools in Germany were still in 'stone age' in 1994, computers were only bought & used some years later (if at all). So the game probably wasn't really used at all, and thus couldn't fulfill its purpose. Which is a bit sad, because it's not that bad really.

If you're into this politics / bureaucracy stuff, why not try it out? It's a nice try, not completely up-to-date anymore, but most of it is timeless (until the next revolution...). A final hint: the empty standard phrases you can choose in the 'hold a speech' - minigame are really funny to a non-supporter of this political system like me