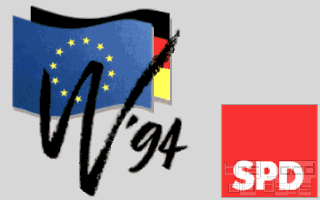 Before he was banished from public view in order to stay in the pool or 'fly' over the fields forever, Rudi Scharping was the head of one of the biggest political parties in Germany: the SPD. In 1994, he managed to lose the most important election in spite of all polls having been in favour of the SPD mere weeks earlier. A few months before that, the results of the election of the European parliament turned out even worse for them. In spite of (or because of?) this game.

Fred Beck, reporter of a strictly non-capitalist paper is stumbling through Europe, supposedly hunting for the story about a conspiracy of evil drug-traders and and the garbage-mafia. Or something like that.

In fact, the 'story' always remains completely unclear. It's just serving as a weak link between scenes which are seemingly out of every connection. It all starts out with the drug-business, then shifts to trash being illegally disposed of in the sea, and in the end, the 'villain' is arrested for dealing with drugs.

Between that, there are these scenes in all the member countries of the EU (those which were back then of course). The beginning in Germany still reminds the player a bit of a point & click Adventure. There aren't any puzzles, because all you have to do is search every pixel of every picture (your very first task is to 'find' the place Fred works - very satisfying), but at least you spend some time on the locations. In the later game, you never do more than exactly one thing everywhere: travel to Portugal to talk to one person, take a look at drug-addicts in Amsterdam, visit Spain to pick up one object someone dropped on the ground there, go to Denmark to see how everyone is living happily there and so on. Incredibly stupid.

There are two kinds of political propaganda: primitive and exaggerated pseudo-critical comments from the protagonist which don't fit the actual views and actions of the SPD at all (it's especially laughable now that they've shifted even more to the right wing, but of course also then) and 'commercial breaks'. From time to time, Fred writes something in his notebook - and for some reason, that's always simplified parts of the program of the SPD. In addition, to make their very cool and youthful boss known, Rudi appears in the European database of criminals. Ahem... great advertisement.

The graphics aren't all that bad, at least as long as they remain static. When the characters start moving, you notice that they're changing size extremely when they're moving away from or towards the 'camera'! Have these people ever heard anything about use of perspective?

Abenteuer Europa is definitely a sub-par Adventure game. We're all used to having no challenge from promotional games, but this is still an extreme case of having absolutely nothing to do. The advertisement is simply ridiculous, lowest level reached. It can be summed up with one sentence: this game is as cool as Rudolf Scharping.

You can win a trip to a European capital if you finish this game. All you have to do is to send a 'secret slogan' you get to the SPD. I'll save you the trouble of playing the game yourself, though: the solution is “Sicherheit Europaweit SPD”. Now hop into your time machine and head to 1994 to get your postcard there before the dealine! 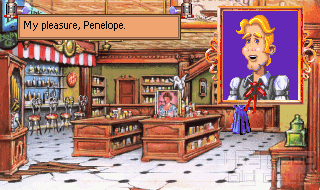