Prisoner of Ice
for PC (DOS) 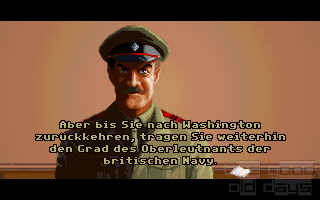 Prisoner of Ice holds a special place in my heart, because it's one of the last three games I've ever bought for 'full price'. I ordered it immediately after it came out. So quickly that there weren't any walkthroughs for it. Remember those were the days when Internet access was unthinkable, and even if I had had it, I probably wouldn't have found any cheat sites/newsgroups/mailboxes. The only way to get solutions for games was with next month's computer magazine. That one wouldn't arrive before three weeks. I was on my own to successfully play the game. Not that I usually use walkthroughs to finish Adventures, but it gives a good feeling of security to have one lying around…

It turned out I wouldn't have needed one anyway. The game arrived on a Saturday, I had finished it on Sunday evening. No, I hadn't played all through the night. It was just that the game didn't offer more than 5 hours of gameplay – probably less. But first, the commercial break.

American Leutenant Ryan is part of the crew of a British submarine on a rescue mission to the Antarctic in 1937. All they find of the scientific expedition is one survivor who babbles crazy stuff and a few crates. To make matters worse, they're attacked by a German plane. Systems damaged, the cargo begins to defrost… and shortly thereafter, the captain has been eaten by a vicious monster! Only Ryan can stop the crazy nazis utilizing the powers of the evil old gods. Or are these gods using the nazis only to get back to earth?

The story actually sounds better than it turns out in the end. The Lovecraftian motifs (the prisoners in the Antarctic have been taken from At the Mountain of Madness) work well on their own, but the mix with nazis and time travel is a bit crude. Especially the family relations and respective ages of the characters are really messy.

And here we are again at the question of gameplay. Prisoner of Ice disregards the most important rule of Adventure games: the main entertainment comes from all the times you've gone wrong. This game doesn't give you any entertainment in those cases. It simply always tells you “this doesn't work” (even if what you tried would make perfect sense). Only the way the designers wanted is open, and that one is completely linear and very unimaginative!

Linear in a way that you can't even do the (for example) three things required to do in one room in the order you want, but you have to do it all exactly like it's meant to be (even though the actions are often unrelated to each other). Unimaginative, because the puzzles are mostly completely obvious (use key with locked door) and sometimes completely illogical or purely consist of pixel hunting. In the later game, there are hardly any puzzles at all anymore. Then, you just walk through the rooms without doing anything. The defining moment: you're 'teleported' into a cave. There is nothing in it. There is only one exit which is blocked by a door without any handle. Oh wait! There is a ring hanging from the wall! What could we do……? Maybe click on it since it's the only object? Great, it worked! What a surprise!

Prisoner of Ice is actually very typical for this last generation of adventures. They had improved technically: high resolution (actually, you can choose between 320x200 which requires 4 MB RAM and 640x400 which requires the double amount of RAM), full speech (the benefits of CD-ROM), easy mouse interface (one click for everything). The 'spirit' is lacking, though.

The hybrid graphics are a mixture of very good-looking hand-drawn backgrounds and rendered sprites. The characters all move as if they've swallowed a stick. And because of the different styles, they never seem to touch the ground – they're basically floating. Technology just isn't everything, it's how you use it.

That put aside, we get to the real typical thing which defined most of the adventures of generation CD-ROM: the lacking contents. The writing is sub-par in spite of the ok story, because there is only this story and nothing else. The characters are as thin as paper. No, that is not what adventure fans want!

In a way, Prisoner of Ice is an entertaining game as there is never anything really frustrating. But somehow, I can't fight the feeling that this is exactly the kind of game which eventually killed the genre…

Well, Alone in the Dark had quite a few references.

There are Nightghaunst in the stairs, even thought they aren't like the ones in the Lovecraft stories, in them they where creatures with darkness instead of faces and daemonic look that were servitors of the hidden ancient gods that trapped the old ones. There, they look like daemonic statues and are killed with they reflect in a mirror, but even thought, the look is exactly the same as in one somewhat known ilustration of them, that appeared in the pen and paper role playing book and the card game.

Also, the thing in the library is said to be a dimensional vagabond (at least as something like that was referred in spanish), a thing that appears in a story that I haven't read.

In the library, in the hidden room, there was a book that appears in a Robert Bloch storie dedicated to Lovecraft. As in the storie, if you read the book something invisible appears, raises you in the air and breaks your back (and supposesly drinks your blood).

In the underground you can find deep ones, and also there was some information about them; Mi-Gos, also based in a know drawing; and a dhole, that was named in some papers.

To protect yourself of the wizard at the end you had to use an stone with the elder sign engraved.

Just to add. The game is part of a trilogy formed by Alone in the Dark, The Shadow of the Comet and this, The Prisoner of Ice. There are references to the previous, as the explorer that is named in the three and whose ghost appears in this one, or the main character of the Shadow of the comet that reappears.

Also, the have some direct references to the Cthulhu Mythos, the cycle of stories created by Lovecraft and friends. In this one, for example, there is a direct reference and image of Cthulhu.

Mr Creosote:
Feel free to share anything about Prisoner of Ice (1995) here!
[Reply] 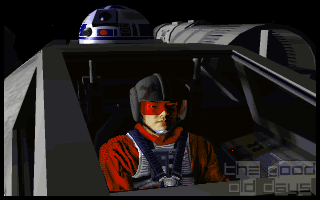