Discovery - In the Steps of Columbus
for Amiga (OCS/ECS) 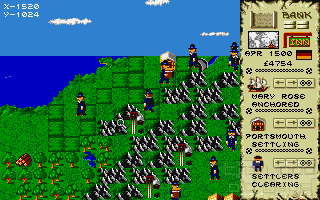 Impressions never had the best reputation with the mainstream gamers. They mainly produced quite inaccessible (granted) strategy titles. Caesar and Cohort are maybe their widest known classic titles. The vast majority of their games completely disappeared though.

Discovery - In the steps of Columbus is one of the games sharing this fate. It might be mentioned on a handful of sites, and on those, it is usually presented in a negative light. But as usual, I doubt if all of these people have actually played the game really - or what would you think if the game's 'review' is only a quote from another site with the only 'personal addition' being "utterly boring game"?

To understand the points I will raise in favour of the game, let me describe it a bit first. You take control of one of Europe's main superpowers of the late 15th century (the addition of Prussia seems a bit strange though) and control the colonization of the 'new world' (doesn't have to be America, there are other fictional worlds, too).

You send out ships with settlers who found new cities once they reach land. Little settler-sprites swarm out, chop wood, build bridges, fill swamps until they're dry, build farms, warehouses, factories and so on. If you've planned well, your settlements flourish, more settlers are 'born' and goods are produced. In that case, you build trading ships and send your valuable goods home to Europe (or Asia if the cities there offer a better price).

This economical planning is the main part of the game. But what good is a lot of gold when your neighbours can just take it away from you? The Indians are of course not too happy about you occupying their land. And the European settlers of other nations aren't too friendly, either.

) strike against them. On sea, war ships fulfill the same purpose: you can let them patrol your merchants or even attack the enemies ships and steal their cargo...

The game takes place in real time. Large 'realms' with many cities are therefore a lot harder to maintain than small ones. Especially since there is a lot of micromanagement: you can control every settler individually and to be really successfull, you have to! There are general commands like into which general direction a city should expand, but those will only make the new settlers walk there and produce wood. All the buildings have to be constructed by your direct command. Settlers will also blindly run into swamps and die there if you don't tell them otherwise.

That may sound awful now (and it is maybe one of the main reasons so many people dislike the game when they've only tried the game briefly), so I should add that this extreme micromanagement is only necessary to get each city started. Once it has grown to a decent size, you can safely leave it unattended for a while and only casually give some new general orders.

Another thing which certainly repulses players would be the controls. In theory, they are very good - extremely well thought-out and easy. But firstly, the main window showing the 'map' is too small (not enough overview), and secondly, it's hard to choose a specific settler, city or ship in the swarming or the later game stages. Whenever some 'unit' is chosen, the game is paused though which balances this out.

The really biggest downside is the pathfinding routine. Settlers run into mountains, ships get stuck on the coastline all the time! This is most fatal with trading ships because those, like all units and cities, have a 'moral' value. This value decreases with the time on open sea. Since this time of course increases indefinitely because of these 'escapades', it very often reaches zero - and then, the ship turns to piracy. Unfair and annoying

Now it seems I'm falling into bitching about the game, too. Don't let all that fool you though: the easy, yet clever economic model is quite addictive - players of Colonization will find quite a few similar ideas in Discovery which was released three years earlier: the job system (which is only hinted at here, but the idea was obviously there), the production system and a lot more.

Discovery is a good game with quite a few little flaws in the detail, sure, but those can't spoil the fun - no matter what some wannabe experts are trying to tell you

Important note: At the time of writing, this game ran only in Fellow, not in UAE! If you're dependant on emulation, keep this option in mind.