The Chaos Engine
for PC
Also available for: Amiga (OCS/ECS) 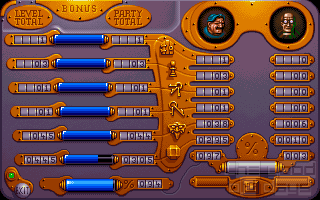 Like in most games the story of "Chaos Engine" is not really original: A "Baron" invents a machine in his experiments that "although primitive" becomes more and more powerful and finally changes all creatures in its surroundings to evil monsters.

The Player gets the task to build a team consisting of two mercenaries (one is alternatively controlled by the computer) that should destroy the machine and its offsprings. The six choosable "characters" differ in intelligence, skill, speed and energy. Furthermore they have different guns and two special powers, e.g. healing, throwing dynamite or reading maps.

The games' basic concept is quite simple: Firing all the time you navigate your mercenary through four worlds (each subdivided in four relatively complex levels) and erase with the help of your (computer-controlled) partner an unlimited number of monsters which attack from the front or back. The levels are a bit more complex than in most other action games: From time to time there are small puzzles that admittedly only consist of finding switches in most cases. Often there are even several ways and exits to complete a level. That was maybe supposed to raise motivation.

Money plays an important part in "Chaos Engine". It either lies around visible or hidden or can be found as a bonus for killed monsters. After each two levels there is the possibility to upgrade or to buy lives and weapons. Another important point are the passwords that at least partly replace the lacking saving option.

"Chaos Engine"'s well done level design and good controls make it an action game above average. The variety of enemies/worlds and the possibility to (in limitations) develop your team also contribute to the positive overall impression. The graphics may be worse than on the Amiga but they are more than adequate.

The disadvantages of "Chaos Engine" are typical of action games: a few unfair events and an incredibly high difficulty level in the later game. At the end of the game when fighting the "Chaos Engine" a few ideas would not have been bad.

On the whole it is a recommendable game that surpasses many new action games by far. It shows that a good game is no problem without much technical fuss.

Mr Creosote (2014-01-12):
Although it may not appear like it, the Preacher actually turned out to be the best character to choose for me. He is fast, i.e. he can easily outrun enemy fire and he can acquire the "shield" skill which just has to be the most useful one by a huge margin.
Herr M. (2014-01-12):
Congratulations! Any hints and pointers, except being persistent?

Mr Creosote (2014-01-11):
Update to the review: I've continued playing the game and I can now proudly announced that I have now managed to actually beat it without cheating

That muted palette is not a necessity on the Amiga. The reason I mentioned James Pond is just that – it's running on the same system, but it uses a completely different palette. That lollipop Chaos Engine was actually ported back to the Amiga in the 'AA' version. It's really a pity that the Bitmap Brothers lost their touch there. So that current re-release is based on that one, too

The music is another difference between the different releases, by the way.

It really depends on what kind of game it is, doesn't it? With Steampunk/industrialisation, I really connect toned down, grey-ish colours. That, of course, would not be appropriate at all in James Pond, on the other hand.
Herr M. (2014-01-05):
Originally posted by Mr Creosote at 08:54 on January 5th, 2014:
I'm not sure why anyone would want to play the version with the lollipop colours