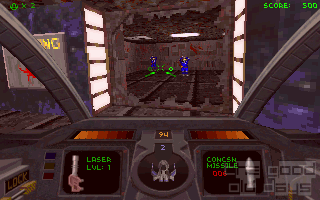 “3D shooters” are embarassing in general, this typical German designation alone gets on ones nerves fast. In combination with that pimply teenager who murders at home while mummy is gone shopping, these accumulations of appropriate cliches become almost unplayable.

Against that, a less thrilling mixture is offered by Descent, which has to be tolerated by daddy and the other censors. It is true that it deals with shooting from the famous “ego-perspective”, too, but against your expectations you don't see a chainsaw at first but the cockpit of a speceship - boring! Neither the fact that this vehicle is weightless will entice one of these heart-tearing nice boys. But haven't you ever thought of demolishing your well-cut lawn, although it represents the fulfilled dream of your life? Well, you cannot do that in Descent either, but maybe thousand of robots waiting to be destoyed satisfy your violent phantasies? No, they don't, I know. They don't even bleed.

The background belonging to Descent lacks of ideas: It is the well-known story of the machine that mutates to a tyrant suppressing its inventor. Robots working in mines on several planets have gained the upper hand and arrested their “masters”, the humans. Inner ethical conflicts of the robots as well as their strive after social acknowledgement are clearly revealed the by this gentle treatment. For some reason the remaining free humans plan to destroy these mines including their reactors now. So enter your spaceship and descent to the tunnel!

Just to avoid confusion: The tunnels we are talking of are no ordinary dirty mines, but rather exellently equipped places for qualified employees. With your mini spaceship, practically well-armed and armored with lots of space for improvement, you discover these mines. However, the rebel robots of every kind come out of dark corners and want to stop the destoyer, even kill it. You get rid of this metal buddies with “futuristic” weapons like laser- and plasma guns - no blood, just robot tears. But because of their less elegant style of fighting they don't deserve anything better. Unfortunately, the humans forgot something in their unlimited stupidity: Every single key for closed doors has to be found within the levels. Slowly you discover more of the sometimes huge mine systems, proceeding through tunnels, halls and caves until the final objective of almost each level, the reactor, is reached. Once destroyed, 50 seconds are left to find the exit and escape to outer space before everything explodes.

Concerning technical aspects, Descent presents itself quite good, only the graphics seem to be a little coarse when displayed on large monitors. In exchange for that, the controls work fine once you get used to it and start to fly risky maneuver without problems. Level design and structure convice the insensitive player, too. The most important negative aspect consists of the difficulty level: The robot crowd becomes too powerful in level 7 at the latest and you have to make use of cheats at least for some time. Orientation can be another problem sometimes as the caves are huge and the pretty confusing map isn't always helpful.

All in all Descent is a funny game in spite of that, but you never get the feeling of being in a “campaign” because the story does not develop during the game. What is left to say? Yes, there is an outstanding multiplayer option (for several computers in a network) with different modes of cooperation and rivalry.

Back in the mid-90s, there was no game similar or better than Descent when you wanted to fly a spaceship through a 3-dimensional mining system and fight enemies coming in from all directions. It was one of the coolest games you could get for your PC at the time! It was also ported to the Macintosh and later even received a Playstation release.

The game is set in the solar system. You play a mercenary, called the “Material Defender”, who has been hired to destroy mining robots who have been infected with a virus. The “Material Defender” works for the Post-Terran Mining Corporation. It's your job to rescue captives and destroy the infected mines.

The game is notable for giving you 360 degrees of movement in which to do so. To finish each level you must destroy the mine's reactor. After you've done so you have only 45 seconds to find the escape hatch and leave the mine before it explodes – with you in it.

The real innovation of Descent, besides the awesome 3D maps, were its – not so stupid – enemy ships. They would not simply fly towards you trying to blow you up with deadly lasers. No. They would fire a shot, then fly backwards to hide from your attacks. Or they would wait for you to fly by before attacking you from behind. This was something really special in 1995! All in all, Decent is a game that was years ahead of its time. The game pushed computers of the time to their limit, and still looks good today. This groundbreaking game is definitely worth a play for fans of first person shooters.

Back in the day, Descent was published as a Shareware game, so it ended up on many gaming magazines' disks or CDs. It reached some major popularity. I enjoyed this game a whole lot and sometimes still do… 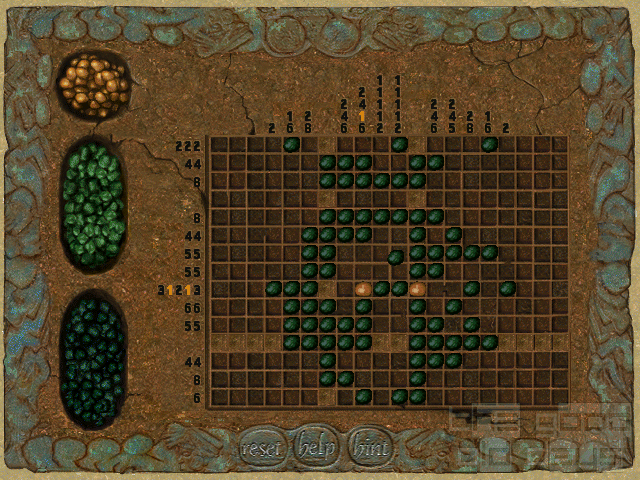