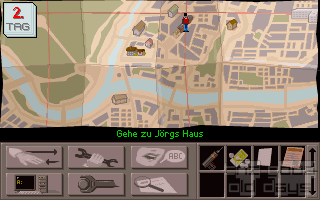 Dunkle Schatten (Dark Shadows) was released during the “Fairständnis” campaign of the German Ministries of Inner Affairs in 1994. The slogan was “respect human rights - against racial hatred”, the development was executed by Art Department, a company well known for its advertising games at that time.

In contrast to their other games, this one doesn't support a product, but tolerance, courage, and social engagement. You get the role of a certain adolescent called Karsten Wegener, who is supposed to be a prototype of a character to identify with. His behaviour and his living conditions are obviously meant to appear as authentic as possible from a youth point of view.

According to that, the story takes place in average, fictitious town somewhere in Germany, where one can move on by means of a map. During school holidays, a youth center is under construction there, and of course Karsten helps as much as he can. However, your happy working is interrupted by unbearable racist crimes in town, which have to stop with your help.

In order to defeat the nazi scum, you use a simplified version of the classic “point-and-click” interface. Six different types of commands like “Take” and “Talk to” can be selected. Beyond that, a graphically displayed inventory is accessible.

Experienced adventure players will be slightly disappointed, as the components of the control interface rarely have to be used. Most “puzzles” are solved by visiting certain places at the right time. Automatically talking to the people there, you gather new objects that just have to be brought to another person; instead of challenging riddles, one often acts as a messenger instead. No one will ever get stuck somewhere as you just have to go to all places available and talk to all characters if you don't know how to proceed.

So the action develops during extremely casual conversation mostly. Of course, this permanent “cool” use of language makes a rather artificial impression, but at least no one is overtaxed by it. In spite of, or perhaps because this use of language, the dialogues won't become boring for people with a sense of irony.

Concerning the contents, I liked the game slightly better than I had in mind from the past. Although the topic is a perfect occasion, few characters are even more complex than the typical “good” and “evil” scheme. Of course there is the benevolent “streetworker”, who manages to convert people within five minutes, and on the other side the dull skinhead, but surprisingly there are some people between the two extremes. Racism is not only presented as the philosophy of a minority of thrashing hooligans, but as a phenomenon within the entire society as well, that can start in every day conversation already.

In contrast to that, the fundamental absurdity of racism is not discussed, presumably for reasons of hard comprehension. Instead, the game rather deals with facts that one can read in “accidentally” placed brochures for example. Regarding its game play elements, Dunkle Schatten is much too simple unfortunately. In conclusion, a surprisingly differential treatment of the issue in some parts. It is equally pleasing that there once were publically promoted games where you don't have the usual aim to murder humans on a national mission. 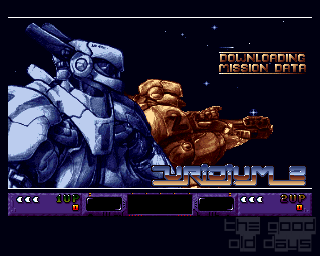