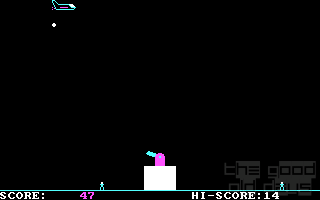 Paratrooper is a quite old game, made by Greg Kuperberg and released in 1982 under the Orion Software label. It was a PC Booter game, and even featured joystick support. It's one of those games with simple premise, simple graphics, but furious and fun gameplay.

The player controls a turret at the center of the screen, while planes go over it, pouring paratroopers and bombs. The turret cannon can be rotated left and right, to destroy the planes, paratroopers, or the hard to hit bombs. If paratroopers get to the ground alive, they'll try to enter the bunker where the turret is placed, and for that they need four men. That's the game over.

Special bonus happens if you hit the parachutes, making the men fall their death. Black humour gaming in 1982, perhaps? Another mechanic of the game, and very interesting, is that you can shoot as many bullets as you want, practically ensuring no man alive will touch the ground, but each bullet costs 1 point. So you can stay alive, but have a score of 0. So you must save the bullets and use them properly through the ever increasing difficulty.

And that is the game, really can't say much more. However, the gameplay is well balanced, and can get you hooked for a while. It was a refreshing change back in the day, specially seeing the lack of game possibilities the PC had in its only second year as platform.

Despite the basic graphics and simple gameplay, Paratrooper is still fun to play, providing fast action and challenging gameplay. A retrogamer reviewing important DOS games named Paratrooper the best DOS game ever, in a YouTube video I can't locate right now. Well, I think that's exaggerated, but you'll be surprised yourself if you never tried this game and got addicted.

Maybe today the game would even be labeled “casual”, but I suggest you to play it yourself for a while before thinking I'm going overboard with such a small game. Try it at The Internet Archive.

Paratrooper is quite an old game (published in the same year as the much better-known Alleycat, 1984) and, as many of those games, graphically none too advanced but quite addictive.

The story, if the lack of one can be named such, is very simple. You command an anti-air battery and the enemy is trying to destroy you. They're trying this in two different ways:

1. By dropping teams of paratroopers which will blow up your gun if they land in sufficient numbers. (game hint: if you shoot the parachute instead of the trooper, the
trooper will fall and flatten any troopers already at ground-level.)

2. By sending in a wave of jet bombers which always hit unless you shoot the bomb itself(tricky).

The mission is simple: survive and kill everything you see. (Sound familiar already?) Not the most intricate plot, but sufficient for lots of fun.

What do you expect from a 20 kilobyte game from 1984? The game has four colors, namely white, black, green and some purple/pink-like colour. Explosions have lots of debris, especially your own explosion. Some things, like your gun and the choppers, have moving (changing) parts, but that is the graphical limit of the game.

Yes, the game has sound. No, you can't turn it off. Yes, some people find it annoying. No, it's internal speaker sound, so adjusting your external speakers doesn't work.

What I'm trying to say is, Paratrooper has sound, but its sound can cause headaches. Just listen to it. It doesn't play during the game(you do have sound then, but that's not the annoying sound), but you hear a part of it every time you die (and that's often). To me, the sound is one of the very few downsides of the game.

The controls are very easy to learn. Left and right arrows to move, up arrow to fire. That's it. That doesn't mean that the GAME is easy. The game is hard. VERY hard. It will take LONG before you get a reasonably high score, especially since it's almost impossible to hit every single paratrooper. Oh, and your score drops by 1 for every bullet you use.

You can't change difficulty, but some games do turn out more difficult than others because of the random seeding of paratroopers, sometimes you get hordes, sometimes only five. The same goes for jet bombs.

The game is challenging, but even those of us that aren't blessed with lightning reflexes should be able to have quite a lot of fun with this game. As I said, it's addictive.

None. It seems to work as well on a p3 1GHz with 128 mb ram as it does on a 286. You don't even need to slow the game down. (Well, not if you want to play without cheating...) All you need is the 20 kb game file. Instructions are also given, just press I on the title screen as instructed.

I may be a bit biased due to the fact that I played this game extensively a lot of years back, but I think it's great fun to play, and it won't suck up gazilliobytes of hard disk space like most modern games do. From time to time it is frustratingly hard

Johann67:
Feel free to share anything about Paratrooper (1984) here!
[Reply] 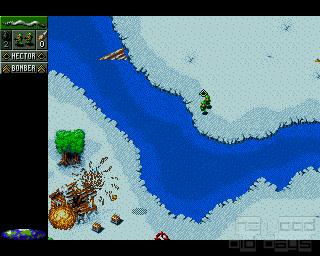