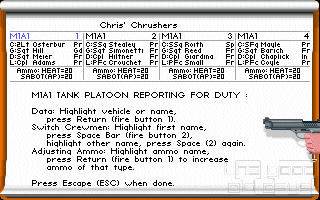 In M1 Tank Platoon you're leading a platoon of four mighty M1 Abrams main battle tanks through various missions. Your objectives range from defending important positions to meeting engagements or frontal assaults. You're up against Red Army troops who have invaded into Western Europe.

After choosing a nickname for your platoon (Americans love that!) you decide which type of mission you want to play. There are two gunnery trainings, a single engagement and a campaign available. Next you select how tough your opponents should be. There are four levels: From dumb 2nd line troops with obsolete equipment to the elite Guards units which are highly trained and equipped with the most recent vehicles.

In the briefing you're told everything you need to know about your mission: Day or night time (according to the manual you should have a technological advantage in the dark but I can't confirm this), summer or winter (no difference apart from ground colour), what your objectives are (defend or attack), which support units you have at your disposal (another tank platoon, mechanised infantry, anti-tank units, artillery, helicopters...- can be up to three units) and a short summary of enemy deployment, their equipment and what they intend to do. Bearing this info in mind you can equip your tanks with two different types of ammunition: HE (High Explosive against softer targets) and AP (Armor Piercing against tanks).

At the start of your mission you see the map and placement of your platoon and auxiliary units. Depending on your mission objectives you should either look for a good defending position (like hill crests) or think about the best route to attack the enemy. You can run your platoon together in various formations or deploy each tank individually. You can also decide whether to command just tactically by giving orders to your units or take control of a tank yourself (which is much more fun). There you can sit on the driver's seat or be responsible for the weapons or take over the tank commander's place. As commander you have a 5"-machine gun at your disposal to clear the battlefield from infantry, trucks or planes. You can control any of your four tanks in case the platoon commander's tank is destroyed. Every tank has a crew of four (commander, gunner, loader, driver) and they have individual skill levels ranging from 'inept' to 'excellent'. You can improve them by handing out medals and promotions you receive after successful missions.

When playing a campaign your success determines not only the outcome of the war but also which type of mission you get next. After a good mission you will very likely be on the attack whereas after a poor effort the Red Hordes will try to drive you back even further. You also have to be careful about who you're facing. While you're able to destroy the old 2nd line tanks from any range and angle you'll have a hard time getting rid of those modern T-80s Guards tanks. It's almost impossible to penetrate their front armor so sneaking up to their side or back is recommended.

The graphics are OK for a game that is already 11 years old. And there's even Adlib sound which should work with most modern sound cards. So nothing to brag about concerning this point.

Despite its age M1 Tank Platoon is still one of my favourite war simulations. The missions aren't too long and always interesting as they are randomly generated. So if you've ever wanted to command a powerful MBT then M1 Tank Platoon should be your favourite choice. 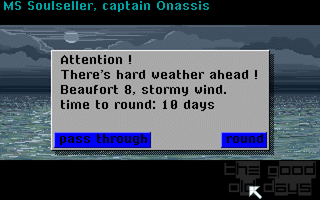