Aces Over Europe
for PC (DOS) 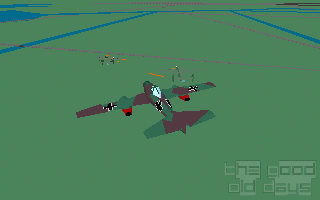 That Aces over Europe is kind of a sequel to Aces of the Pacific becomes obvious at first sight. Graphically nothing has changed, just some more sounds have been added; each plane has its own engine noise now. But nevertheless it's better than AotP because most of its minor flaws have been removed.

The start is identical to AotP. You choose a single mission or career, a service (USAF, RAF, German Luftwaffe) and a campaign with which to start. You're given random missions like escorting or intercepting bombers, fighter sweeps, strike missions etc. Controls are also identical to 'AotP' so nothing new here. What has changed then, and especially changed for the better?

Of course there are a some different planes to fly. USAF fighters are the same (P-38, P-47, P-51), for the RAF you can select the Spitfire, Tempest, Typhoon and the only fighter-bomber of the game, the Mosquito. Luftwaffe planes are the aged Bf-109, the famous FW-190 and the first jet fighter, the Messerschmitt Me-262. Furthermore you can fly the first jet bomber ever, the Arado 234.

Mission types are more varied than in AotP, especially strike missions. Besides already known targets like airfields and ships you now can attack trains, truck or tank convoys and bridges. You also have fighter escort on many bombing missions which adds greatly to survivability. Allied bombers now fly in groups of six and their combined defensive fire is very deadly. So escort missions are surely the easiest ones whereas intercepting those fire spewing fortresses is quite dangerous. To equalize these advantages enemy fighters now act much more aggressively and even on easy combat level you'll be shot down quite often.

In AotP fighter squads always consisted of four planes. This is not longer true but only for the German side. As casualties rose hugely in 1944/45 they just didn't have enough planes any more. That means that sometimes you'll try to intercept one or even two bomber squads (that is 12 huge bombers!) all alone. Well, if that ain't even odds...

Flying for the Luftwaffe almost always means that you're outnumbered and on the defensive but on the other hand if you're shot down you're able to continue your career as most missions take place over Axis territory. But when you're downed as an allied fighter pilot you will most certainly end the war as Prisoner of War. Ground targets are now able to defend itself. Trucks, hangars and pillboxes open gunfire at you and AA fire is much more effective.

All in all life is much harder in Aces over Europe compared to its predecessor but also more interesting because there's more variation in it. Did you enjoy AotP? Then this game is an absolute must-have!

Adhoc:
Feel free to share anything about Aces Over Europe (1993) here!
[Reply] 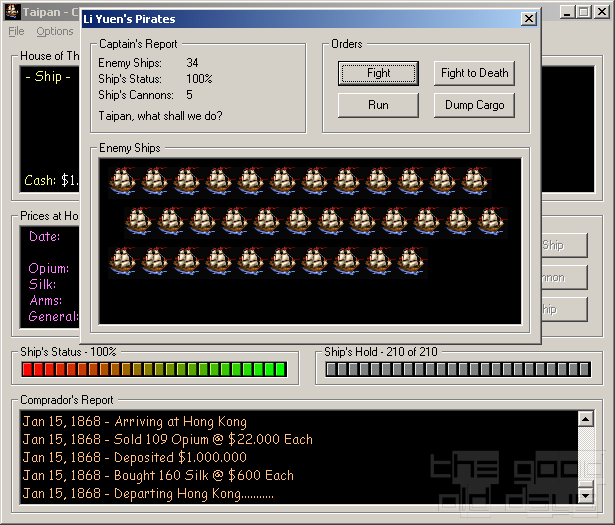