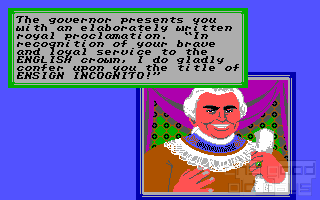 Pirates! is surely one of the most well known computer games of all times. Almost every gamer who had a Commodore C64 will sigh when hearing the name. How many time have I spent in front of my home computer playing it? Months, I guess. How many ships have I sunk? Thousands maybe. I could continue this list even further.

What made Pirates so highly successful was on the one side the revolutionary game concept and on the other side infinite replayability. Brilliant sound (oh those wonderful Bach tunes...at least I think it was Bach) and good graphics completed the picture of the near-perfect game. Sadly graphics and sound suffered severely in the PC-conversion. Especially the noises coming out of the speaker are simply annoying and there's obviously no way of switching them off. But gameplay is still very addictive.

At the start of the game you choose in which time period you want to play. From 1560-1680 there are 6 available. The most important difference in them is the Spanish domination level of the Caribbean. While in 1560-1620 most cities are in Spanish hands in later stages you can find more and more English, French or Dutch settlements which makes life much easier as you have more opportunities to recruit new crew members and sell your goods. Next you select one of the aforementioned 4 nationalities. Their respective governments provide different support for pirates so this adds to difficulty, too. But mainly the level is decided by four possibilites (from apprentice to swashbuckler) which not only have an influence on difficulty but also on the share you get when you divide your plunder. After typing in a fearsome name you can lastly choose one of five special skills. 'Fencing' makes you better in that (you'll need that quite often), 'Medicine' gives you more constitution (longer career), 'Charm' has an influence on relations to governors and their daughters, 'Gunnery' gives you more accuracy in sea battles and 'Navigaton' lets you travel faster through the Caribbean.

The background story of your character is quite similar in all time periods and countries. By misfortune or pioneer spirit you come to the Caribbean to work on a plantation or a ship. By chance and skill you finally get to command a ship. You find yourself with a small vessel and crew and little money near a friendly town. Your first step should be to make a stop there.

In cities with 600 and more inhabitants you can visit the governor. He explains the political circumstances, hands out promotions and land as reward and you can meet his daughter (maybe your future wife?!). Sometimes he has some special missions for you like sinking a certain pirate or delivering a letter. You can also have a drink in the pub. There are always some unemployed swashbucklers available to increase your crew. Sometimes a rugged man is sitting in a corner and offering information about hidden treasures or cities. The bartender tells you the latest news. It's important to watch them closely.

Example: You're English and at war with Spain. The English governor rewards you for damaging the Spaniards. But suddenly a peace agreement is reached. So there's no sense in sinking further Spanish ships as you won't get any rewards any more. Or sometimes a wealthy city is struck by Malaria or Indian attacks which reduce their garrison. That could be the chance for a daring attack to capture vast amounts of gold. Another important building in a settlement is the merchant. He buys and sells goods and buys or repairs your ships. The city is also your only chance to save your game or dividing your plunder amongst the crew. You have to do this after a few unprofitable journeys when your men are getting unhappy or angry and start to desert in numbers taking part of your gold with them.

Leaving the city you find yourself somewhere in the Caribbean Sea. There are clouds wandering by which can have an effect on the direction of your fleet especially when you have bigger vessels. Near the coast you can often find shallows which you should evade at all costs with ships bigger than sloops as they could rip open their bottoms and sink them. So you cruise in front of enemy cities until you encounter a ship. After further identification (nationality or pirate) you decide whether to attack or flee.

Ship-to-ship combat is represented in a magnified map. Basically it's most important to avoid the enemy's salvos and to hit with yours. After some fights you will surely learn how to dance around the stern of your opponent and firing in salvo after salvo without getting harmed at all. You can either sink the other ship, damage it so badly that it surrenders or choose to enter it and to decide the battle in swordfight. There you see yourself and the enemy captain from the side.

You can hit or parry high, middle or low. Hits have an influence on the crew's morale and a wild crew can even overcome a much bigger number of enemies when you fight very well and quick. After the battle you decide if you want to keep the ship or just plunder and sink it. Sometimes even enemy crew members offer their services to you.

You can attack enemy cities as well. While you can enter unfortified cities immediately towns with forts and more than 100 soldiers have to be forced to let you in. You can attack from the sea (quite similar to naval combat) or from land. There you command your units in real time and try to ambush the enemies in woods and so on. In certain Spanish cities at certain times of the year the famous Silver Train and Treasure Fleet can be found. As they transport vast amounts of gold they are valuable targets but unfortunately well protected. You need a large crew if you want to have a chance there. When you have overwhelmed the defenses very quickly or have a large crew compared to the town's size you can install a governor of another country. Then this city can serve you as a base in the Caribbean.

Trade is handled very simplified in Pirates!. There are 3 trade goods: Apart from food for your crew there are a number of natural products (sugar, tabacco...) and luxury goods. By shipping goods to and natural products from big cities to smaller towns you can make quite some profit if you want to pursue a peaceful living.

But of course you can't earn any fame with that and no fame means no titles. When you are promoted you learn about the whereabouts of certain Spanish villains who have some information about various familiy members of yours. When you find one and defeat him in a duel he gives you part of a map (similar to the treasure maps) of where to find your sister or uncle or others. And when you have found them they give you another map piece to an incredible Inca treasure (really huge amount of gold!). So that's another goal you should try to achieve.

Well, I could write on for hours about this fantastic game but then there's nothing left for you to find out yourself. I just can say: Go, get it and play one of the most fantastic computer games there ever was, there ever is and there ever will be! Two thumbs and all toes up!

AKK:
Ich wollte nach diesem Spiel auch immer eine Schatzinsel finden...
Rob S.:
The graphics for the CD32 version are identical to the Sega Genesis port. Both games have more in common with the original Pirates! than with the PC/Mac "Gold" versions in terms of content. The PC version adds a few towns/cities on the southern Texas coast that were never there in the original game.
trad.a:
This game is beyond imaginetion (sp?). I have been searching abandonware sites for 4 months for the perfect game. I have found it. I hope you do too. Download ASAP.
Dude on the other side:
This Game Rocks
[Reply] 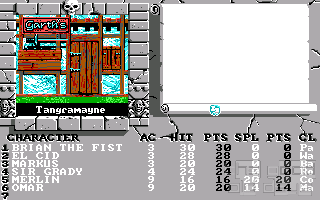