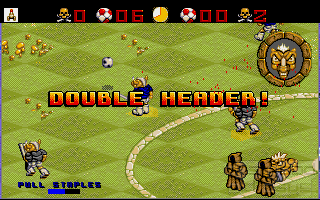 To us Europeans, American Football is just a big slaughter anyway. So when we play Brutal Sports Football, we don't even notice much of a difference to what's offered in the NFL. Who cares if a few weapons have been added? Donâ€™t those suits make living weapons out of the players anyway (dramatic pause…)?

When the same thing is done to our beloved football (the sport Americans call 'soccer'), though, it's of course a completely different story. Killing opponent players? Shooting their heads off with guns? The ultimate sacrilege: no offside??? How could they!?

Objectively speaking, Wild Cup Soccer has about as much to do with soccer-football as Brutal Sports Football is like football-football. Which makes sense since what we have here is the sequel. 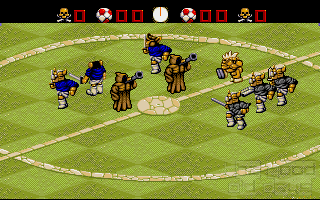 A team of vikings competes with seven others made of anthropomorphic animals (rhinos, monkeys, lizards…). At least this is the initial situation at the beginning of the league, cup or whatever the player chooses to perform in. Around the matches, Wild Cup Soccer adds a new layer of team management. Beginning with a transfer market which quickly shakes the uniform picture of each team up.

Apart from buying and selling players, prize money gained from scoring goals or killing enemy players can be invested in weapons (from swords to shotguns and rocket launchers). Even the team's formation can be fully customized, depending on personal preferences or reaction towards the opponent's tactics.

Once on the field, most of this hardly makes much of a difference, however. Unfortunately, core gameplay has been messed up pretty badly. It is always a bad sign in football games when dribbling is a more promising approach than passing. Isometric perspective, lack of overview, limited moveset and unpredictable teammate behaviour make planned maneuvers an impossibility. 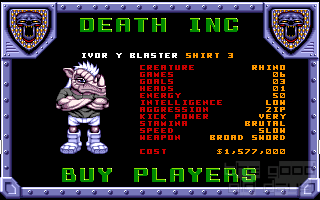 Though then, they are really unnecessary anyway. The computer controlled teams are unbelievably weak. They are completely unable to find a way to overcome the automatically controlled goalkeeper. Whereas on the other side of the field, the human players can simply mow them down and score pretty much unopposed. If an opponent should manage to grab the ball, tackling them is incredibly easy as well, as direction is automatically set.

Speaking of automatic support, it even turns annoying at times. When not having the ball, even running direction is determined by the game instead of letting the player actually be in the driver's seat. If this were a serious sports game, that alone would kill it.

But it isn't. At all. The perspective shift and its negative effects on gameplay already mentioned, Wild Cup Soccer is actually a very good-looking game. On still pictures. The choice of colours it top-notch, the sprites really nice. Even on the field, buying different players pays off visually, as they can be distinguished well. Such little things help tremendously. Yes, I'm looking at you, [game=]Speedball 2[/game] clones! In motion, everything is quite choppy and therefore unattractive.

On top, a couple of strange bugs are present. Occasionally, the obviously wrong team will simply be declared the winner. Such as when a team doesn't even have sufficient players to compete at the beginning of the match. Running speed differs wildly depending on the direction you're taking. Players will occasionally start flickering.

Such observations just solidify the impression of an unfinished game rushed to the market (to meet the football world cup of '94, eh?). Bugs can happen, but putting a game on the shelves in which it is essentially impossible to lose a match against the computer is simply inexcusable. Balancing is completely off, after few matches (all won, naturally), the player's team will be fully equipped with the best players and the best weapons. Or not, as it is even unnecessary. Likewise, if your system is so flawed that in several situations, you feel the need to take away control from the player, maybe you should re-think it.

Against another human player, at least the effect of the incompetent artificial intelligence is mitigated. Though then, the transfer market etc. turns completely pointless and is, in fact, not even offered. The only way to semi-enjoy it in two player mode is to play a single 'unfriendly' match with pre-defined teams. Even then, however, the winner will not primarily be determined through skill, but rather through luck in the chaotic tackling contest.

In the face of such a disaster, it is no surprise that the Brutal Sports line ended with this.

To us Europeans, American Football is just a big slaughter anyway. So when we play Brutal Sports Football, we don't even notice much of a difference to what's offered in the NFL. Who cares if a few weapons have been added? Don't those suits make living weapons out of the players anyway (dramatic pause...)?

When the same thing is done to our beloved football (the sport ignorant 'Americans' call soccer) though, it's of course so much different! Killing opponent players? Shooting their heads off with guns? And even more of a sacrilege: no offside??? How could they!?

Objectively spoken, Wild Cup Soccer has about as much to do with soccer-football as Brutal Sports Football is like football-football. Which makes sense since what we have here is the official sequel to the sports classic.

The game plays very similar: your team has to score more goals than the opponent and / or kill as many of his players as possible. The ball cannot be carried? Who cares, it's 'glued' to the foot of the active player anyway! So no change there.

If you look at the details, you'll find quite a few changes though. The 'Brutal Sports line' took a similar developement as its big idol, the Speedball series: this second part has a transfer market and more individuality for the teams and players. Instead of the faceless androids of BSF, WCS consists of eight teams playing in two leagues which all consist of different 'races' of players. These are some kind of humanoid animals, e.g. rhinos, monkeys or lizards running on two legs. Through the wonders of the transfer market, the teams mix very quickly though. The best thing about this: each player is actually individually recognizable on the field! One monkey is not necessarily equally talented as the others, there are stars and wimps - just like in real life.

These changes are actually very well done, even better than in Speedball 2 - you will begin to love and care for your little stars in no time! There are a few downsides which make WCS inferior to its predecessor though.

First of all, there are the graphics. The colours look very nice, but this isometric perspective is just confusing! This might be no problem for players who are used to modern-type sports games with their weird changing 'cameras', but I can't get used to it! It's incredibly hard to pass the ball accurately or even to approximate distances 'with the eye' this way.

Then there are the weapons. Unlike in BSF where those lay around on the fields and could be picked up, you have to buy them for the individual players in WCS. On the first view, this is a good idea. But since the prices for the weapons are so low, you'll have your whole team fully equipped after only a few games! And then, all of them are running around with their swords, guns, mortars or whatever. It takes away the 'special flavour' from the weapons.

Most important downside: the difficulty. I have almost never lost a match in WCS! Even when I tried it for the very first time, I won. Only 1-0 then, but I won. In all the hundreds of matches I've played, all my opponents only scored one single goal against me - combined! The only single time I've lost a match was when another team actually killed all my players who were still exhausted from the last match (here, the controls kick in: your own players always automatically try to go for the ball, even when you tell them otherwise; in this case, an enemy player literally bombarded the spot the ball lay on and all my players of course ran into that 'trap'). Way too easy!

It should also be mentioned that the game has a few bugs. For example when a team doesn't have enough players to even begin a match anymore, they automatically win it. Huh? And once, I had wiped out all of the opponent's players but one, and when this one guy killed the first of my players, he was announced winner for terminating my team. Erm, yes. All this is annoying, but I wouldn't call the game bug-ridden.

Fooling around with the transfer market, playing some quick matches - that is really great fun in Wild Cup Soccer. Unfortunately, it is just not big enough a challenge to get you addicted for longer. 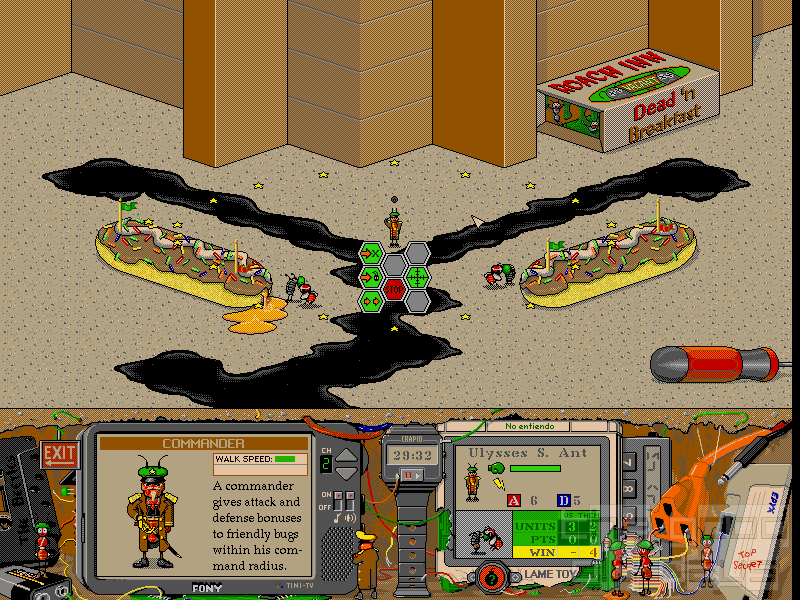