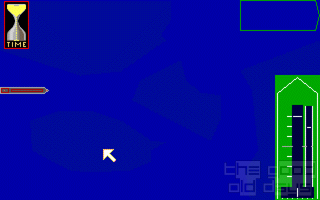 Ports of Call is an early business simulation classic which especially on the Amiga found lots of fans. You're in control of a fleet of tramp ships which means that you don´t actually buy and sell goods yourself but rather look for charters to deliver.

1 to 4 human players can take part in either a timed game (1-3 hours) or an unlimited one. After selecting a homeport you're ready to go. On the main screen you can see the world map (numbers on it show the locations of heavy storms), at the bottom there are numerous stats and on the right three buttons to view a globe, visit your office and go to the shipbroker.

The shipbroker is selling 7 different ships in 3 categories: Cheap but very old ships, good quality pre-owned ships or brandnew hi-tech vessels. They also vary in size which has an influence especially on the action scenes I'll mention later. The ship prices vary throughout the year and when you want to buy a ship you should watch the market for some time because you can literally save millions when you catch the right time for an acquisition.

A recently acquired ship becomes available in your home port after some days. In a port you have several options. You can repair and refuel your ship, checking today's charters, lay your ship up for some time and load a selected charter. You're earning your money by accepting charters. There are many different goods to ship around and naturally hi-tech goods yield the best profits. Sometimes charters have a certain time limit in which to deliver them. When you´re able to do this in time you could earn big money. Charters are changing daily so if there's nothing interesting around just lay your ship up for a day. Sometimes you'll get a special secret offer to deliver a suitcase or some boxes with arms; nice extra money but if you get cought you're in BIG trouble (detention, huge fine...).

When you've found a good charter you load it and after a few days you're ready to leave the port. You can either do this manually by steering the ship out of the harbour in a certain time limit or you can hire a tug for some bucks. The same is true for entering another port. After choosing at which speed to travel (watch your fuel usage!) you're into the open sea. You watch your ship sail around the globe and there are some things which could happen. Throughout the game there are some action scenes: leaving or entering a port, avoiding a collision with another ship, rescuing a shipwrecked person and manouvering through reefs. When you succeed you get a higher status which raises your loan frame but when you fail it goes the other way (besides damaging your ship...). On your way around you'll also encounter heavy storms where you have the option to sail around them (which takes several days) or go right through them (which could severely damage your ship).

Your prime concern should be to find 2 ports where you can get good charters in both so all your trips are profitable. A good start is Rotterdam or Hamburg (lots of hi-tech goods) and Monrovia (lots of *illegal* wares), but better save your game often because sometimes your ship is attacked and robbed by pirates along the African coast.

A little bit annoying are the action parts because they come up quite often. Especially with bulky ships they are sometimes hairraising; every port has its individual layout so some are easy to handle whereas others look quite impossible to find a way through. Luckily the big and modern ships have transverse thrusters which let you turn at the point. And also don´t forget to visit your office regularly otherwise someone could think of stealing some bucks from you.

All in all a nice and not overly complex business simulation and surely worth a look or two. The manual is included in the game file.

Important: This game is not Abandonware or freeware! You can download a trial version, but you have to register if you want to continue using it. There is also a problem with it running in Windows 98, please refer to the official site for a solution!

Jan:
This is one excellent classic!

)
Lachlan:
THIS IS AN EXCELLENT GAME, one of my all time favorites.
Adhoc:
Feel free to share anything about Ports of Call (1987) here!
[Reply] 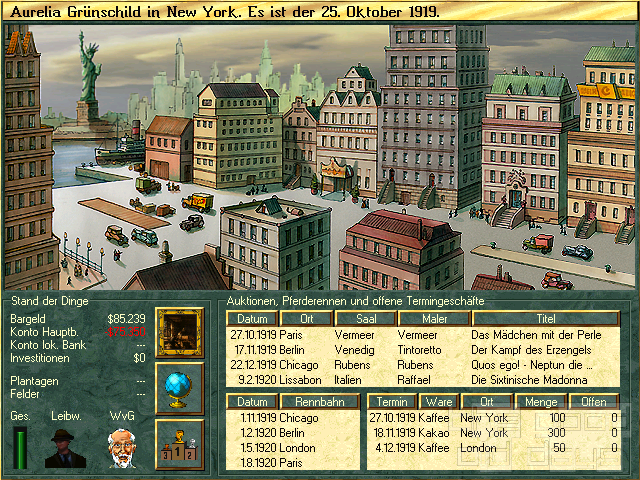