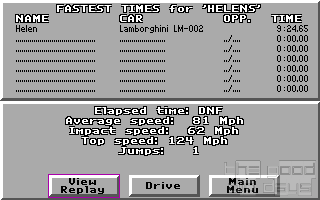 Stunts belonged to the first racing games which I played around 1992 on the PC. And it sure was addictive! Even if it was basically about getting the best lap time, just like all the other racing games of the time, you had to take care not to crash into a barn on the side of the road when jumping over a bridge, not to overshoot when driving up ramps or just land anywhere where no car is supposed to go.

Without a doubt, the biggest challenges are the loopings which really were something (it didn't get better by the collision detection which was not very exact and made it quite a game of luck). Also, the loopings were semi-transparent so that you could see the surroundings through them. No idea why this was the way it was, but it certainly made it even harder to stay on the right track. So most of the time, I simply drove around the loopings.

The choice of cars was very interesting. Almost only high-powered sports cars (Porsche, Lamborghini), but there was also one or the other compact car. So it was a colourful selection. With the smaller cars, you could very well explore the tracks first.

On a technical level, Stunts certainly is no masterpiece. Even at the time, I found the graphics and the sound rather mediocre. This shows, though, that this isn't so important for the fun. The graphics are very reminiscient of Hard Drivin'; very simple polygon graphics with few details. On the PCs of the time, much more would have been possible. At least it ran very smoothly, though I already had a 486 in 1992.

Stunts by Broderbund, is an excellent racing game from 1990, that was one of the first to offer a fully featured (at least for the time) tile based track editor as well as offering a compelling driving experience all playable on a 286 system. Hours of fun can be had designing, sharing and competing against your friends (time trial style).

Combine that with an excellent selection of cars to fit every driving style:

...and the only issue is they didn't release a direct sequel.

The track editor is fantastic but rather simple with each tile having a selection of entities (including roads, bridges, trees and buildings) that can be placed. Rotation is not an option so typically each tile has four different versions - one per rotation. The track editor also allows for the creation of multiple paths to the start/finish line, and here lies the first problem; if the track does not connect as the editor expects, you can save it, but not drive it. And there is no error explaining why. This has led me to numerous long sessions of tile-by-tile checking a complex track only to find a single piece of road that was incorrectly rotated. The other main downside is that the editor does not allow any form of dragging or drawing and each tile must be placed individually.

But I can't think of another racing game that offers anywhere near the flexibility and replayability that Stunts offers.

Given rating of 5 not 6 because of the minor issues with the track editor and some rather unforgiving driving physics.

Stunts is in fact a pretty basic racing game from… let me look that up for you really quick… 1991. Why I am I sitting here, 27 years later, writing a review about some old racing game? Don't I have way better things to do?

Well, because Stunts was and is still relevant, at least in my eyes, even in 2018. The game follows a very straight forward gameplay mechanic: the player, from a limited pool of available vehicles, chooses a car and drives this car through a track against the clock. There are loopings, steep curves, jumps and obstacles. This is all presented in basic vector 3D graphics. That's all, really. But, this is only the foundation of something much bigger… here's where it gets more interesting.

1. Stunts includes a track editor. Everyone can edit a track exactly to their liking or come up with something new and unique. As soon as you've put a few parts together within the editor, you can instantly jump into the game and look at or drive on your creation in 3D.

2. You can not only create these worlds for yourself, but you are free to share your tracks with everyone else. At the time, we used floppy disks, today there is the Internet, of course.

For a game from the early 90s, this was kinda revolutionary. Adding to the simplicity of sharing tracks: The entire game was quite small, so you could easily fit the game + all of your customized tracks onto a single floppy disk and share a couple of these disks with your classmates in school. You would hand out disks adding a challenge to "beat my times, if you dare!" Stunts worked on pretty much any computer, even the very old ones.

Today, some decades later, the world of gaming has changed quite a bit, indeed. Online racing games, mass multiplayer online games, mobile games, whatever. There are certainly many opportunities to play games and there are even games that are quite similar to Stunts, for example the beloved TrackMania in its many forms. But some things have changed: You want to drive a certain car or you want your car to be of a certain colour? "In-game-purchase!" You want these new tracks to race on? "In-game-purchase!" You want… something? Anything? You gotta pay up! And don't even think about playing without being online and logged into some server at all times! IT SUCKS!

You want to edit the original stock tracks of Stunts? Sure, go ahead. They're just regular files. Another car? Sure – just pick one, they're yours! Back in the day you actually owned a game. THIS WAS MY GAME! My computer, my floppy disks! Not anyone else's business!

Thus, at the end of my review, I've come full circe and back to the question: "Why is Stunts still relevant in 2018?" Because it is – as simple and basic it is presented – reminding us about what gaming is, or should be, really all about the freedom to play. It's a game, for crying out loud! You are supposed to play with it in any way you like, not rent some service from some greedy company running on their servers by their rules!

Stunts is a great and very action-packed racing simulation. You don't race against a bunch of other drivers but instead your main goal is to survive the numerous stunts each track has to offer, although you can still compete against a computer controlled car.

But its greatest strength is the seemingly endless variation. There are already a lot of tracks to race on coming with the game file, but nevertheless Stunts has a powerful track editor which lets you build every track you can imagine. There are lots of different pieces to choose: 3 surfaces (paveway, dirt and ice), standard road pieces like straightaways, banked curves, chicanes, crossroads and more, but the most exciting features are the various stunt pieces you can implement in your tracks. There are loopings, big jumps, pipes and halfpipes, elevated roads and more which are big fun to drive through. Besides that you can set different scenery pieces like houses, ships, windmills and others.

In the starting menu you can choose whether you want to race against the clock or against a computer controlled racer. He's not overly smart and on difficult tracks he will most probably crash but he can still provide some challenge. Generally it's more fun to try to beat the track records. There are many different cars to choose from, from big 4-wheel-drive offroad cars to speedy Indycars. Their (dis)advantages are obvious: while offroad cars excel on dirt and ice, racecars can't be beaten on paved surfaces. The race itself can be watched from four different camera positions: from inside the car, a close outside view, a far outside view and a tv camera. I'd recommend using the keyboard for steering because it's the most precise you can get. The graphics are -well - not really the big thing but you'll find your way around.

What's really thrilling about this game is the aforementioned variety in stunts. They give you lots of opportunities to crash your car. Furthermore roads can be elevated by ramps or by going over hills. Quite exciting when it's going down to sea level again and you can't see where the track is going to... Slight and sharp turns, icy or dirty surfaces, crossroads and alternative roads all add to the fun. Try steering your indycar over ice when water is on both sides of the track (when you drop in there you'll sink - game over) - your palms will sweat like hell. And besides Stunt Car Racer this game is the only one where I get this certain feeling in the stomach when doing one of these mighty jumps. Well, that says it all, I guess

If you're a fan of spectacular stunts, get this game. If you're a hardcore racer (Indycar or F1) then this is probably not the game you're looking for. But nevertheless you should have a look at it, it´s really a great action racing game.

Moebius (2014-07-20):
Oh yeah, that definitely rocked.... and i still remember "Watch the road, young pup!". That guy was supposed to be an old racing veteran, but he didn't even look that old, unless of course the eye-glass and fabulous moustache were supposed to do the trick.