Secret Weapons of the Luftwaffe
for PC (DOS) 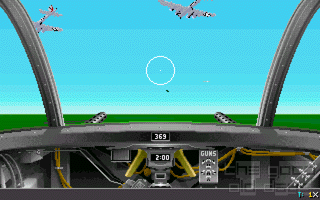 This game is one of the first real flight sims I played on the PC and despite its age it's a game I still play nowadays because it just has everything you can expect from a serious flight simulation game. But on to the details...

The game is set, as you might have guessed from its name, in WW2, covering the last phase of aerial warfare over Europe from 1943 on till the end. At this time the US Air Force started their bombing raids into Germany to help subdue the Nazi Regime and damage German economy. So we have the two sides Germany and US and good news is that you can play them both.

Secondly, you have quite an array of planes to select from (always bear in mind how old this game actually is!). On the German side you fly well known fighters like the Bf-109 or the FW-190 and of course later on the first jet fighters Me-262 and Me-163. Several expansion disks, which were released later, included mostly experimental planes like the weird looking Do-335 (with a prop turbine on each end) or the first all-wing plane Go-229. On the Allied side you can also take command of the fighters P-47 and P-51 and also, a really interesting feature, of the B-17 Flying Fortress bomber. Also for the Allied side expansion disks were released, featuring the P-38 Lightning, a twin-engine fighter which fared well in the Pacific scenario but rather poorly in Europe, and the P-80, the first US jet fighter.

Thirdly, the options about which game to play are really astounding. You can either fly training missions to practice gunnery or bombing, play one of the numerous historical or what-if missions, create your own custom missions, start a tour-of-duty (a set number of missions with a certain plane type) or even play a whole campaign with all the necessary strategic and tactical planning (more to that one later on).

When you've decided which mission to fly you're presented with the briefing screen. It shows a map of the target area and which planes are expected to be involved on both sides. Also you're briefed about what targets to hit or to defend (depending on nationality). Good thing is that you can also change the setup of your plane, choosing from various options like additional tanks, bombs, rockets or extra guns to equip your plane with so you're best suited for the upcoming mission.

All missions (historical or tour) start near the objective to attack or to defend respectively, that means action starts within a minute. The scale of these fights is not too big: there are rarely more than 12 planes involved. Graphic-wise SWOTL has not too much to offer naturally, but you find your way around and - at least for me - graphics are not what really counts in these games. Sound is ok as well. You have 2 reality levels concerning controls, the easier one lets your plane respond swiftly to your commands whereas the more real one makes your plane more sluggish (depending on payload) and also lowering your gear or the flaps will now damage these parts at too high speed. A very interesting option is to fly the B-17 bomber, the Flying Fortress. Here you can switch between the pilot, all gunnery stations and the bombsights. You can switch the plane to autopilot which keeps it steady so that you can concentrate on fending off German fighters or aiming your bombs with the famous Norton bombsight.

With every plane you can start a tour of duty, which lasts - depending on the selected difficulty level - up to 50 missions. A statsheet keeps track of all your actions, how many planes you downed, your hit percentage and so on. The objectives are pre-set, so if you start a tour again you will attack the same targets again. But the composition of the two opposing forces is always random so while the 1st try could seem impossible the 2nd one could be a piece of cake. The difficulty level also affects the weapons your enemy has at hand. Especially when flying B-17s you know the difference - in Easy the fighters 'just' fire their MGs and cannons at you, but already at Moderate they shoot rockets and grenades at you which can finish off even a B-17 with one lucky hit. But even a badly struck B-17 can struggle home. You have the opportunity to control all 4 engines individually so if one engine is badly hit and close to burning you can switch it off. Even with 2 engines out you can make it home, sometimes...

But the campaign mode is where you can really show your talent. You can start at 3 different times of the war and thus you have different objectives - preparing the invasion by crippling German economy or later trying to strike a devastating blow to German gasoline production. On the German side of course you try to prevent this. On each day you can (US) choose targets, set up the bomber groups and their escorts and decide over waypoints, altitude...On German side you're given a number of possible targets and then you have to set up patrols to defend them (and be lucky that they are at the right place...).If all's set, you choose one cockpit and off we go. Everything's being tracked - from various important resources (parts for new planes, gasolines...) to pilots (big concern for the US side). Also you can decide on production of new planes or (as German) research of the Secret Weapons (jet fighters and the V-1 and V-2 missiles). Really great stuff, but very difficult to master.

Another great feature is the gun camera. With it you can review the action from every possible angle, but setting this up is tricky on faster PCs - but on the other hand it's quite fun to zoom around the huuuuge game map for some seconds and then guessing where you are now

Of course this game has also its flaws. The actual battles are too short - it's not realistic that German fighters intercept the bombers just some miles before they reach the target and that on the whole way home nobody is pestering the Allied planes after the initial onslought (apart from some quite effective AA guns). Secondly bombs dropped from B-17s tend to explode prematurely, causing no damage at all - very nasty if you barely made it through and then have to watch this miserable ending...Thirdly a bit more planes during a dogfight would surely not be bad.

But overall it's a great game and still nowadays in my opinion one of the best wartime flight sims available alone because of the sheer amount of options - a true masterpiece by Lucasarts.