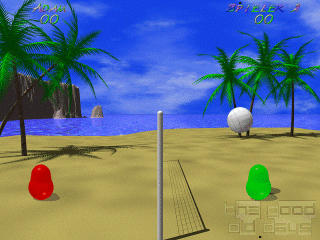 Blobby Volley is another little but neat freeware game. As the name states it's kind of a volleyball game and somewhat resembles a beach volleyball variant. But here it's only one on one.

The game itself is explained rather quickly. It's viewed from a 2-D side viewpoint. There are no human players but rather 2 unshapely things looking like huge blobs and that's where the name comes from. They don't have arms so the ball is hit with whatever touches it first. Controls are easy. Move your blob with the mouse and let it jump by pressing the button. But it's the right timing which you will have to practice. Because of the shape of your blob you have to aim very carefully so the ball doesn't end up in the net. There's also a squash element in it as the ball bounces back from the bounds. Another tricky thing…

Each game is decided in one set and the first blob who reaches 15 points is the winner. Blobby Volley follows the (former) standard volleyball rules: You can hit the ball three times before it must cross the net and only the player who gained the right to service can score points. If you hit the net or miss the ball the right of service changes to your opponent. There are three different computer players to challenge you but unfortunately when you've practiced a bit they are no match for you. A better AI would surely be appreciable… It's also sad that there's no 2 player mode anywhere in this game.

A bit more options would have surely come in handy but for a freeware game Blobby Volley is still a nice game and something to fill short breaks.

the version of Blobby Volley i had (and possibly still have lying around on my HD somewhere) allowed for two player play.
Its great fun, and plays exactly the same as single player, but with a human (and generally more challenging) opponent.

Also, the game is much easier to play with the keyboard than with the mouse, and it contains both English and German versions in the one game.
[Reply]