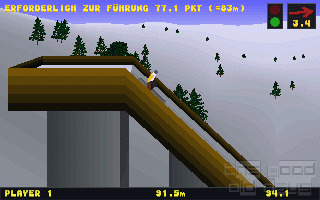 This is a neat little, yet highly addictive game, when you're into such kind of winter sports. In 'DSJ' you're a ski jumper trying to win the World Cup and beating all hill records.

First you should choose to practice some jumps on different hills. Controls are quite simple: Push a mouse button to start, push both simultaneously to jump off just before the table ends, balance your jumper with very gentle mouse movements to get the maximum lift and push a button to make a picture perfect Telemark landing. When you've made a bad jump or when you've gone too far it's better to make a safer two-footed landing by pressing both mouse buttons at the same time.

Up to 16 human or computer players can participate in the Cup. The level of computer players can be set from appaling to world class or you just let the game pick a level randomly. You can decide how long the tour is going to be by selecting as many of the 32 different hills as you like. They range from very small 50 meters hills to huge 250 meter hills. They all have their own characteristics and need some training to provide decent results. You can also select whether you want to jump each hill once or twice during the tour.

Before your first jumps you should watch some computer players and their tries as you can get some valuable information about when to jump and which position to take during the flight.

Then you can try it yourself. At the start you're sitting on a small beam. Your first look should go to the top right corner where a wind indicator can be found. The most ideal condition is wind directly from the front. You have 15 seconds to start your jump. It's not only important how far you're going but also style does matter. 5 judges give marks from 0-20 (just like Mr Creosote

and the lowest and highest mark is not considered. The other 3 marks add to the points and can make quite some difference. Every jump can be watched and saved in the replay directly after the jump and new hill records are automatically saved in the replay studio. Apart from a tour you can also jump in a teamcup where several players combine to teams.

Graphics and sounds are quite simplistic, but that's not so important. When you watch a real hill jumping event and compare the jumps with the ones in this game you will detect surprising similarities.

Overall a highly recommendable game if you like hill jumping. But be warned: 'DSJ' can keep you away from real life for quite some time as you will always think: 'I must get this hill record even farther down!' and with 32 hills you¨ll need lots of jumps to do so...