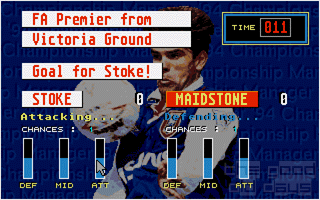 After my last week's “dry” addition (Imperium) yet another game without noticeable sounds and graphics, but again it's well worth playing. CM 93 takes you into the English football divisions. Starting in Division 3 (the fourth highest league in England) you have to lead your club to the Premier League and European Stages. What makes CM-games different from most other football manager games is the fact that you're just the team manager which means that you don't have control over any finance-related sectors like advertisements or stadium improvements and that you're not always allowed to spend as much money on players as you want.

But now let's get into it. Team management is in many aspects quite similar to other games of this genre. You have a squad consisting of goalkeepers, defenders, midfielders and strikers. Each player has numerous stats which not necessarily tell everything about his skill. More important is his average rating. In each game every participating player gets a mark from 1-10 with 10 being the best. So this average rating is the best way to judge a player's abilities. The transfer system is also nothing special. You can search yourself or let your scouts do it and there is a national transfer list as well as an international one. But foreign players will only join your team if you've had some success already.

Personal management of the staff and the players is quite important in CM 93. You carefully have to choose your scouts, especially the youth scout, the physio and your coach which actually does the practice. When dealing with players you have some options to choose from. Renewing contracts and placing on the transfer list is nothing unusual. But you can also fine a player or give him a bonus when you have the impression this is necessary (a string of bad performances...). You can insure your players so in case of an injury you can send them to the best hospitals around for free which greatly reduces recovery time. An interesting aspect is the reserve squad. It's a pool of youth players which can help out when having lots of injured regulars and some of them will eventually make it to your first team.

Your success is monitored in the board confidence percentage. Should it drop below 50% you're in trouble. When you don't win big games now you'll eventually get sacked. Should this happen the game is far from over. You have to sit out some turns and wait for other teams to sack their managers. You can then apply for these vacant positions and maybe they render you to be the right man. So it all starts over again. This manager career is quite motivating because you can leave a club which can't achieve more or you can apply for a lower team when you have won everything already and try to do this again.

A match itself runs down in accelerated time. On the screen there's just the current result and at the bottom of the screen three bars for each team which represent the respective defence/midfielder/striker performance. Interesting scenes like goal scoring opportunities or bookings are shown in short comments which can sometimes add highly to the tension when you're waiting for the referee's decision whether he gives the other team the penalty 2 minutes before the end of the vital cup match or not. But that's all, as mentioned before no graphics, no sound.

A remarkable feature of CM 93 is the high number of statistics. Each player's career is monitored and constantly updated, for example the games he played for which team, how many goals he scored and what his average rating was. Furthermore there are numerous team statistics like biggest win, highest attendance, most goals in game and lots more. For each division there's also a top scorer list and an best average rating list which can be quite useful when looking for good players from lower divisions.

With 46 league games and numerous cups a season takes quite some time to complete. But somehow you'll always want to play yet another season to see whether you can make it into the European Cup or whatever goal is next. And it's not too hard to make it from Div 3 to the Premier League in the span of 6 or 7 seasons. But getting there and staying there is something really different...

So, all fans of football manager games should have a look at it. It's fun, not too complex or difficult to learn and quite motivating.

Championship Manager 93/94 was basically an update to the original Championship Manager. While some (including me) may argue that the game should have been released as a datadisk instead, the undeniable truth is that CM 93/94 was the one that popularized the series for years to come. The game features the most complete set of statistics for players, an incredible amount of information about matches played, opposing teams, player and team history and more. Tinkering with the teams and team strategies was taken to such a level that every statistician was in heaven.

Unfortunately, the game offered little more than a never-ending series of statistics. Unlike its primary competitor at that time, Premier Manager II, Championship Manager did not offer any business-related features. You could not build up your stadium, sell advertising space, train your players, operate your own junior team or scout for other players. The business in this game boils down to trading players, and due to the fact that your best players retire earlier than you'd hope for, you will soon realize that it is almost impossible to play this game forever. After building up your team and possibly winning a few championships in a row, your best players retire and you will never recover.

So who did this game appeal to? To everybody who strived for a high level of realism. While the Premier Manager series was simpler and more fun to play, Championship Manager offered an unprecedented level of realism. In the sports management niche, this game was the most realistic game simulation, and ultimately prevailed in the fight for audience against Premier Manager.

oyoyoy:
This title is available as a free download at the developer's (sports interactive) page. highly recommended.
Adhoc:
Feel free to share anything about Championship Manager '93 (1993) here!
[Reply] 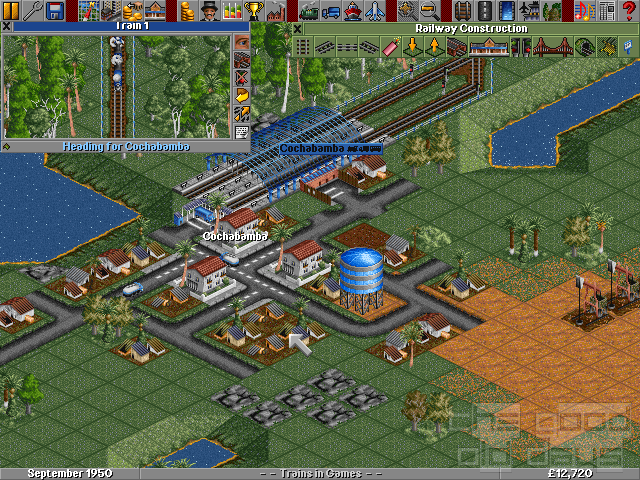