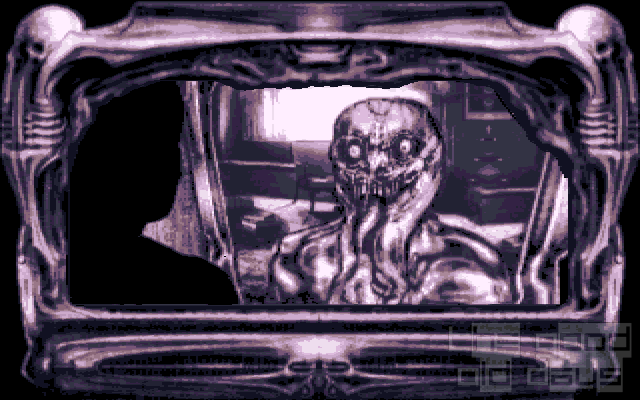 Big licences. This, right from its inception, was apparently Cyberdreams' marketing concept. Hans Ruedi Giger, creator of surreal biomechanical fantasy creatures and widely known since his contribution to the film Alien agreed to let his name and back catalogue to be used for their first game, Dark Seed. It was probably a good deal for Giger who didn't have to lift a finger (Cyberdreams were just allowed to use existing pictures and designs), but also for the newcomers to the game industry, as Giger's name ensured some media attention. 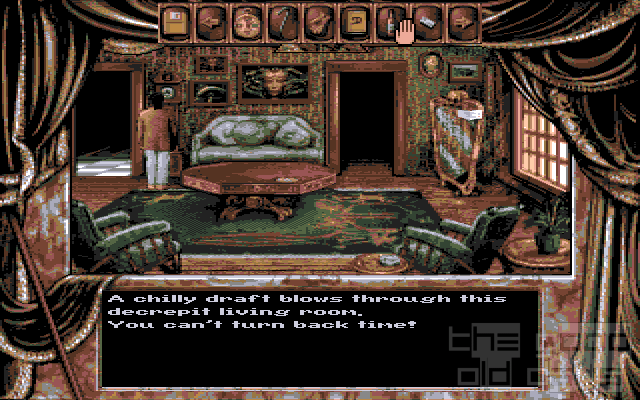 If I could turn back time!

Appropriate to the Giger licence, Dark Seed makes an attempt at the rarely seen horror adventure genre. Yuppie Mike Dawson, named after and played by the game's main designer, takes residence in a run-down mansion in a tiny village, seeking refuge from the stress of the business world and aiming to write a book instead. The headaches which have plagued him for some time, however, don't go away. They rather intensify, accompanied by disturbing nightmares… the latest one being about a Gigeresque alien/machinery planting something into his own head.

From such an opening, players may expect a gory scarefest and therefore leave disappointed. There is little shock value to be found. Likewise, explicit writing (location descriptions and the few dialogues) can be considered clunky at best. Rather, it is the atmosphere which is unsettling in places. Some of it intentional, like the weird decoration of the house, left by the previous inhabitant. The strange micro Twin Peaks village where nobody really talks to Dawson. Some of it is probably unintentional. Like Dawson – probably even stranger – also never really interacting with anyone.

Yes, this Dawson is a strange fellow. On the one hand, he is fairly strongly characterized through the manual, so he can hardly be considered a hollow projection space for the player. Nevertheless, with all the weird things occurring around him and happening to him, he never shows the slightest reaction. He never shares what he feels or what he experiences with anyone. The inhabitants of the town are only good for strictly business-like interaction (buying from the general store, lending books from the library…). But in case Dawson doesn't trust them sufficiently, why doesn't he ever pick up the phone to call some closer friends? 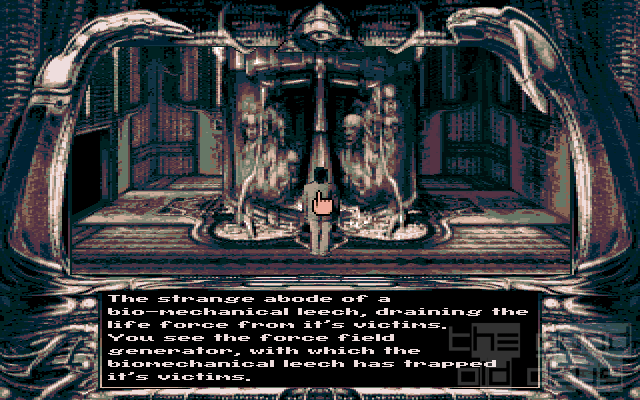 How does this make you feel, Mike?

All this is feeding the suspicion he may be an unreliable narrator. Maybe all these things, revolving around evil beings from a parallel dimension, are only inside his mind? Are all those things, in classic horror genre tradition, just symbolic for his own crumbling state of mind? Is his journey, i.e. the game we're playing, a symbolic one?

Indeed, it is not clear whether Dark Seed works in the way it was intended originally. Thankfully, the designers had the strength not to reveal too much in a lame twist at the end, but leave it all open. This is not Seven Keys to Baldpate. Or is it? The way the player is left in a constant state of uncertainty about his own avatar for sure is the biggest strength of the game.

Graphically, it's rather the opposite. Good intentions are clearly visible all over, but execution sometimes leaves a bit to be desired. Cyberdreams selected a high resolution mode, according to themselves by demand of Giger himself. Though honestly, they cheated a little. In horizontal dimension, all pixels are actually doubled. Vertically, the image looks less distorted than in the original PC version at least. Though at the cost of using an interlaced screen mode.

The player being much closer to the screen compared to watching TV, flickering becomes very noticeable. Without a flicker fixer, i.e. a dedicated hardware device, the game is essentially unplayable (in case you're concerned now, yes, you won't have this issue in an emulator). 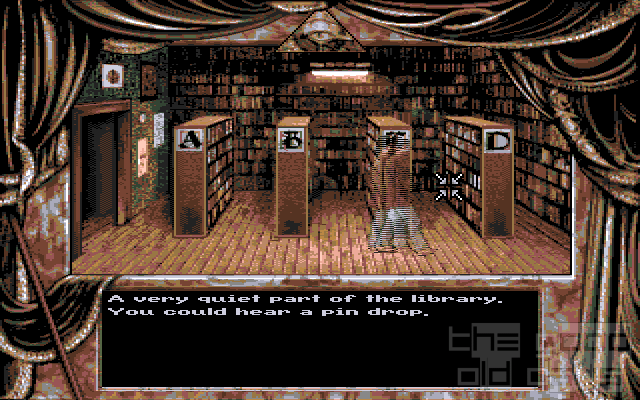 The irony of it is that although the "high resolution" requirement fulfilled, the effective pixel count of the real scenery isn't all that big. That is because only part of the screen is actually used in that way, the rest being occcupied by a sort of static frame which serves absolutely no gameplay purpose. Nevertheless, the visuals certainly are one of Dark Seed's strong sides. Some piece of Giger is usually put right into the centre of attention and from there, the Cyberdreams artists filled out the rest of the frame in a stylistically seamless manner.

Behind the plot and graphical facade, arriving at gameplay, it's unfortunately another step downwards on the quality scale. There are a number of good design decisions as well, but for each of these, there is another one which sort of spoils it to some degree. For instance, the game nicely reflects the knowledge state of the protagonist by making relevant hotspots only appear when there is actually a good reason to examine them more carefully. It's not so nice, however, when the trigger for activating such a hotspot has no discernable causal link with it, so that you are repeatedly forced to simply re-visit each location and comb it for new objects.

Talking about hotspots, the most cited issue by a large degree has to be the pixel hunting aspect, and yes, it is true that there are a couple of instances where you are supposed to find pixel-sized objects. The bobby pin (two pixels big) isn't even the worst offender; the pocket watch blurs with its background in a much less noticeable way; and sometimes, you are supposed to find hotspots on other hotspots, i.e. where usually you wouldn't even look for anything. The fact that by far most hotspots in the game are decently sized makes the instances of pixel hunting actually more severe. 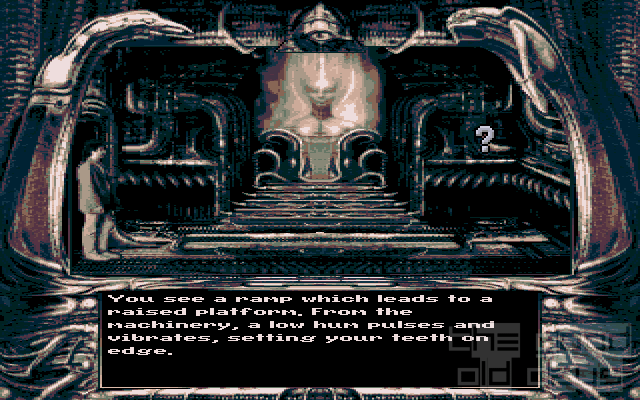 Then, there is the aspect of the mirrored alternate dimension the player finds. Twisted versions of the same locations are found there and some of the strongest puzzles involve manipulations on one side to have effects on the other. A cool concept which unfortunately, is not used nearly enough. To add insult to injury, they don't use it in favour of some laughably roundabout adventure game logic, for example in order to acquire something as simple as a wooden stick.

Instead, much of the difficulty actually stems from the real time clock ticking. Most of the time, the player will actually be in a dead end, without knowing it. All too often, the game will end in death, which wouldn't be a huge issue if it at least were clear what caused this failure. Touching a trapped lever and being electrocuted is clear. Suddenly being arrested on day 3 and neither knowing why, nor having any clue as to how to avoid it is less fun. Having attempted to take a crucial object too early and therefore having turned it inaccessible although it's still visible, taunting the player with its presence, is inexcusable.

The overall small size of the game, both in location count and time scope, still makes it manageable for the patient despite those faults. Whether this journey is worth it, really depends on the preferences of the player. Those interested in adventure game design and history may find some nice attempts at innovation in here. Those looking for a really good game will be disappointed. Real horror is also hardly found. Nevertheless, when not thinking too much beyond the broader picture, Dark Seed with its strange world and its protagonist wide open to interpretations leaves us with an atmosphere remarkable in places. For the right or wrong reasons, it doesn't matter as long as the effect is there.

For Cyberdreams, the licensing strategy worked out well commercially initially. This game turned into a veritable hit, enough to even spawn a direct, but much less successful sequel. Their other games attempted a similar approach, but apparently neither Syd Mead, nor Harlan Ellison could rival the name appeal of Giger. Further deals with Gary Gygax and Wes Craven fell through and the company folded after only few years.

One of the better known Adventures from the early 90s, Darkseed features classic horror with the help of well-known Swiss artist H.R. Giger who also designed the monsters for 'Alien' (the movie). Your alter ego has just moved in an old villa in a small village. It was a real bargain! Suddenly, he gets this strange headache which is unbearable without the help of a lot of pills and from the first night in the house on, he gets weird nightmares about..... alien-like creatures.

Of course there's something wrong with this house, but what exactly, you have to uncover yourself. I'll just say that this component of the game (the thrill and the horror-stuff) is its biggest plus! Sure, sometimes it's a bit overdone, but if you don't take it all too seriously, it's really great!

There are quite a lot weaker points in the story though. Why does the protagonist already live in this house which has a severely damaged roof, in which the kitchen is unusable and he apparantely didn't even check out all rooms yet? Why does he always run around naked and why does his skin look like clothes? Or maybe he sleeps in his cloths and also doesn't take them off taking a shower? Why doesn't he talk to people in the village (apart from business-like "I want to buy this")? You have to stand quite a lot of this ridiculous stuff and it sometimes get hard not to get oneself the whole game spoiled!

The game is running with a very typical engine for graphical Adventures. Completely mouse-driven, the cursor alerts the player of important objects, easy choosing of actions - overall very well! Unfortunately, there is one downpoint about this again: Sometimes, you have to search for objects which are no bigger than 2 pixels. How could they??? Is that Sierra or what?

Darkseed is certainly not something for people who want hard, but fair puzzles. There are just too few puzzles on the whole for that, and those aren't too imaginative. What it gets its (limited) difficulty from is the real time. Yes, another of those Adventures in which your time is limited. It's a fair amount of time you have each day (you have to sleep at night, that structures the game), so you don't have to save and restore too much.

On the whole, Darkseed just doesn't make it as a true classic. The game part is simply too weak for that. The horror athmosphere balances some of it out, but again, it's not enough for being really very good for the logical holes mentioned above. Remaining is a decent Adventure with some nice scenes.