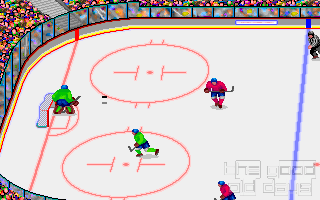 'Face off!' is a great hockey game for its time but suffers quite a bit compared to EA's NHL series. Nevertheless is has a lot of things you can expect from a good hockey game. Exhibition and league games, several coaching options and nice extras like fights and a goalie cam.

When you want to play an exhibition game you simply select the two participating teams and then you can choose several options: Controls, minutes per period (3, 10 or 20), players (2, 4 or 6 per team) and whether you want to apply the full rules or not. Furthermore you can select the computer player's skill level and turning on and off the goalie cam and fights.

Before a league game you can have a look at your team's lineup via the GM functions. You have two rosters of players to choose your team from, a major team and a minor team (just like the farm teams in the NHL). The players have no stats so you can judge their skills only from watching them in the game itself. There's also a playbook where you can design your own tactics by telling the players where to go and what to do at specific points of the rink. A nice feature, but unfortunately the players act way to dumb to put a strategy into effectiveness. You can also make trade offers to other teams, but again, when you don't have a clue how good a player actually is, it's more of a gamble. The season structure can be modified by choosing how much intra-divisional and inter-divisional games you want to play thus determining the overall count of games and how many games you want to play in the various best-of series.

'Face off!' features really nice graphics for 1989 which are quite fluid when using a slowdown program. The rink is viewed from a top side perspective. Before each faceoff you can select which player (except the goalie) you want to control. You only have one key for shooting and passing - pushing it shortly let make you a pass while pushing it longer prepares for a slapshot. When you have switched on the goalie camera and make a slapshot the perspective switches to a behind-the-shooter-cam and then you either take control of the shooter or the goalie - depends on the situation. But generally it's easier to score goals when you switch it off. As mentioned before, the players are skating around quite randomly and mostly you'll have to rely on your own to be successful. The length of penalties depends on the length of the periods you chose and is reduced respectively when playing less than 20 minutes per period.

This game is surely a great game for its time and worth a look but when you're looking for more realism and stats then stick with the NHL series. 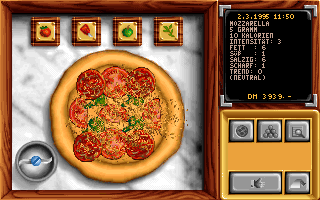