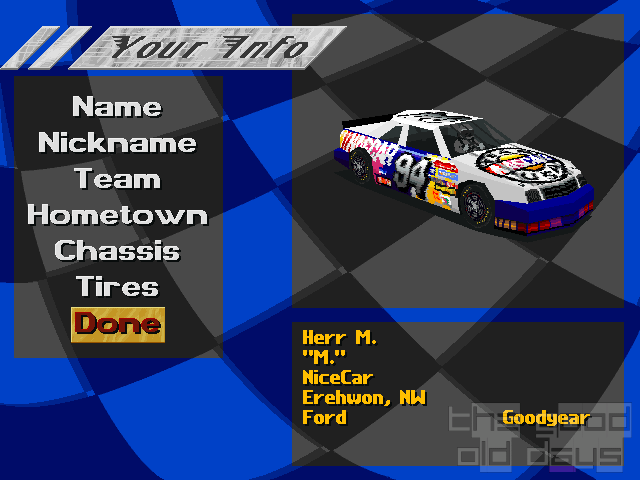 With this game and Indycar Racing Papyrus covered the two most popular American racing series which see up to today frequently appearing new versions (NASCAR 4 being the latest).

Nascars are very simplistic yet powerful stock cars which run mostly on ovals. Although not as fast as Indycars they are quite sturdy and durable and this is absolutely necessary because NASCAR races are endurance races which can last up to 3 hours pure racing time and more.

If you already know Indycar Racing you will feel quite familiar with this game. You can choose to practice one of the 9 supplied tracks (with 8 of them being ovals), run a single race on one of them or start a championship series. You can also decide over various settings like random weather, whether your car may be damaged or can suffer technical failures. Of course you can also determine the number and skill of your opponents.

The most important but most difficult part of any realistic racing game is to find the right setup for your car. NASCAR Racing is not different here. Actually I found it extremely hard to set up the car so you can make decent stints without wearing the tires too much. You can alter wings, tire pressures and compounds and some more and a specific feature of stock cars, the cross-weight. It can be moved to balance the car out when going through turns. The race itself can be watched from 3 different cameras, one inside and two outside views.

'8 oval tracks? How boooring...' you might think now. But the layout of the ovals is so different that each provides a unique challenge and also makes extensive testing necessary. From short half-mile ovals like Martinsville to the impressive high-speed track of Talladega there's a lot of variation in them. And with the tendency of Nascars to stay together in packs using each other's slipstream a lot of frantic action in every race is guaranteed. In contrast to Indycars you can use your sturdy Nascar to bump the others around a bit when they hold you up too long. And you also have the possibility to replace damaged parts to bring your car's drag back to the optimum.

The races are quite long, as I said before. Thankfully you can save the race any time. BUT that is also one of the biggest flaws of this game. Unlike in Formula One GP where the Status Quo is properly saved leaving all cars exactly where they were when you left here the race takes a totally different turn. The cars are lined up according to the standings regardless whether there were lapped cars between them or not. This makes this saving option virtually useless for every serious racer.

The graphics are quite good and the sound is excellent, especially the roaring engines. Overall NASCAR Racing is a good and decent racing simulation for players with lots of endurance. 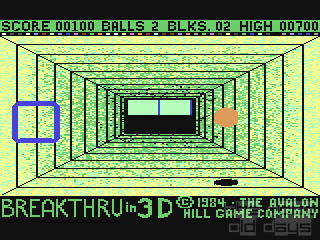