Pool 'm Up
for PC (Windows) 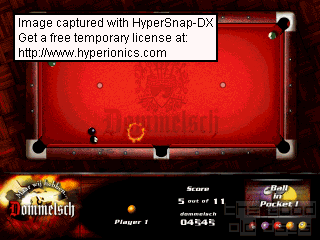 If you're looking for a realistic and strategic pool simulation don't bother reading on because this game is more like an arcade game. But nevertheless it's great fun and it's freeware so there are no legal doubts

It's all about the classic 14 ball-pool variant with 7 striped and 7 filled balls and the black one. You can play alone or with a friend. The difference becomes obvious when you put in your first ball - when playing against a friend you get the striped balls if you put in a striped one and he/she gets the coloured ones and vice versa. You have to pocket them one by one always watching out that you don't touch a filled or the black ball first because that's a foul. When playing alone you also are up for sinking all balls of the same kind but whenever you succeed in that a ball of the other kind explodes and subsequently pushes nearby balls away which can lead to surprising consequences. If the black ball is pocketed before all of the player's colours then the game is lost immediately.

Your score is determined via a point system. The quicker you put your balls into a pocket the more points you get. Each try will reduce your count and fouls like touching the wrong ball first will also result in losing 250 points. So your aim is to pocket the balls with as few tries as possible with as less fouls as possible. When you've sunk your last coloured ball you have to put in the black one in the opposite pocket. Can be quite tricky though...

But now the action actually starts, because you're entering the bonus round which will result in your final score. You have to pocket 9 balls there and the points you've gained in the first round are subsequently reduced at quite a fast rate. So you have to be as quick as possible but still have to watch out for fouls like sinking your white ball which will again result in losing 250 valuable points. The game stops if you've sunk all 9 balls or all your points are used up.

The table is viewed from top down and the controls are minimalistic - you have crosshairs to aim and the only thing you can influence is the strength of your shot by pressing the mouse button shorter or longer - no spin or similar gimmicks. This is frustrating at the beginning but after some time you get used to it and you will come up with surprisingly good shots. Well, as I said, the game is somewhat minimalistic but it's still great fun because you can finish a game in some minutes (to start another one right away of course

). For a promotion game it's really well done, so why don't have a look at it? 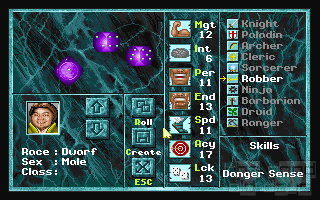