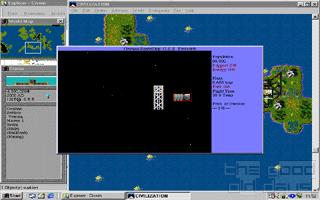 “Civilization” is definitely one of Sid Meier's masterpieces and surely one of the most famous games of all times. The game is far too complex to be reviewed in its entirety. For further explanations look into the very extensive help files and the Civilopedia which come with the game.

Your goal is to lead your people from Stoneage on through the centuries and become the most powerful civilization of the world. At the start you only have one settler unit and must find a suitable place for your capital. Suitability depends on the characteristics of the several terrain types which produce different amounts of food, resources and trade. A food surplus increases population growth, resources are needed for producing city improvements and units and trade generates income and research. Terrains can have special resources like gold or deer and can be further improved by irrigation, mines and roads (later railroads). Terrain can also be changed; you can convert wood or swamps into grassland and vice versa.

In the cities you can build city improvements like city walls, granaries or later on power plants and factories. You can also build various Wonders of the World which bring certain benefits for your people but only if you manage to build them before the other civilizations do. Producing the many different units lets you explore the surroundings, defend your cities and deal with other civilizations. Scattered around the map are native villages; on entering them a random event occurs. Either you're attacked by a horde of barbarians, or you find some gold or a new technology or even an advanced tribe which decides to join your empire and becomes one of your cities.

A very interesting and innovative aspect is technology advance. You start off with some random basic techs like pottery or bronze working. Step by step you discover ever more advanced techs which let you go even further. For example to be able to research Automobile you must have knowledge of Combustion and Steel first. So planning is necessary for an effective research.
When you meet other civilizations you have various options. You can agree to peaceful relations and trade techs or do it the hard way by demanding gold or techs or declare war. You can also find some allies which might help you in conflicts. 3 to 7 civilizations can participate in a game.

Another very interesting feature is the style of your government. At the beginning you are a tyrant which reigns by despotism. You have total control over all aspects but your people are not very effective. So after researching other government styles like monarchy or democracy you can make a revolution and change the government. Democracy is most effective but now you cannot start wars or break treaties whenever you want as your ministers won´t let you do that. So you have to consider what you want to do in the near future and choose your style of government accordingly.

The key to success os finding a good balance between expansion, building units and city improvements and researching the important techs first. There is more than one way to win this game: destroy all other civilizations, be the first to build and successfully launch a spaceship or survive until 2100AD where the game ends (counting the points, you can still continue to play, however). A word of warning: when you have reached the industrialization age keep an eye on the pollution level. When you allow too much of it you raise the temperature of the atmosphere which results in grave changes of the environment (more swamps and jungles, higher sea level).

The only little flaw I can find in this game is the combat system. Like in “Empire” it's one-hit-thing. Losing units are destroyed immediately, there are no hit points or damage levels. This sometimes leads to strange results when your modern battleship is being defeated by an old fashioned sailing frigate.

But apart from that “Civilization” is an absolute highlight which brought many innovative elements into the strategy genre. Additionally the option to create a new map every time you play provides indefinite replayability. A game not to be missed, by no means!

Mr Creosote:
Originally posted by Herr M. at 07:16 on June 2nd, 2020:
Though I have to say: The most interesting part is the beginning and things lose a lot of steam as soon as you hit the industrial revolution. Probably because for one things get repetitive and for two by then you have practically won the game and you are just going through the motions until you eventually win.
Indeed, once you reach conscription and armors, there is nothing to stop you anymore usually. The computer opponents are really only dangerous in the early game. Typical problem with AIs

NullVoid:
Ah, yes, that feeling of "just one more turn" until I was surprised by the sun rising in the east, and I had to be up in a couple of hours for school. It had a few humor elements built in, which were thankfully phased out in the sequels. My favorite is still II, though.
Adhoc:
Feel free to share anything about Civilization (1991) here!
[Reply] 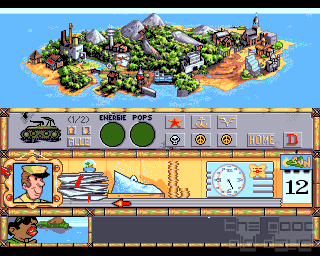