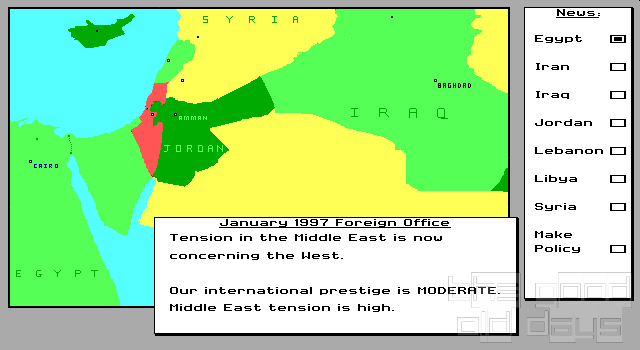 You're the newly elected Prime Minister of Israel because your predecessor has been assassinated. Your task is to help Israel survive amidst the Arab nations by means of diplomacy and military.

Conflict: MEPS is a fun little strategy game which somehow makes you play it over and over again. You're starting on a map of the Middle East where your state and all important neighbours (Libya, Egypt, Lebanon, Jordania, Syria, Iraq and Iran) are shown. Each turn you have to determine the policy concerning each country. You can choose whether to improve or spoil diplomatic relations and whether to support or disrupt insurgency groups. Given enough time they can turn a state into turmoil thus rendering it politically powerless.

Having finished diplomacy it's time for some internal stuff. In the next menu you can buy new weapons, take strategic actions, review your forces, deal with the Palestinian problem and 'join' the nuclear club. There are four different weapons dealers: The USA (best equipment, but quite sensitive to aggressive actions which means they stop their shipments), the UK (good stuff, also less sensitive), France (mediocre systems) and a private dealer from South Africa (obsolete equipment, but sometimes the only one to deal with you). You can spend money according to weapons expenditures ratified by your parliament.

In the strategic actions menu you can deploy troops on the borders of neighbouring countries and invade them when diplomatic lines have been closed. You can also send airstrikes out against civilian, military and industrial targets or against nuclear installations. Reviewing your forces helps you in deciding which battlefield systems to buy next. There are heavy and light tanks, SAMs, helicopters, fighters, surveillance systems and strike aircraft. A good mixture helps in waging successful wars. The Palestinian problem is not really a problem because normally they are quiet. In case of violence you can post a brigade in the Palestinian regions. All major countries are out for nuclear weapons. You can also join the race by regularly funding the research which takes several months.

Between the turns you see newspaper reports which tell about riots, upcoming conflicts and other important news. You win the game by being the only country left, but you can´t invade all countries. Iran, Iraq and Libya are too far away so they either have to be invaded by other countries (they all have their own wars) or thrown over by the insurgency (so keep supporting them all the time!). Jordania and Lebanon are easy prey, but Syria and Egypt are hard to beat on the battlefield. Either you invest lots of time in supporting the guerillas or you find allies. Neither country can survive a war on two fronts.

Every year there's a big Middle East summit where you can decide to agree to a Palestinian homeland, promise the US not to increase your army and stuff. Your decisions have strong influence on your relations to the US so choose wisely.

What makes this game so much fun (actually it's far from being a deep strategic game) is the high replayability. The relations between the countries are determined randomly each time so every game is different. Also Conflict is a quickie to play because a game takes not longer than 10 minutes (mostly less). So if you're looking for a fun little strategy game don't look no further - you've found it!

I played this game so many times.
An amazing simulator teaching you how difficult life in the ME are - for the ppl not for the leadres.

Oh, I played this game when I was a kid! My dad, who is a BIG Cold War poltics buff, bought it for himself, but I eventually got into manipulating the middle-east situation myself.

I thought it was a pretty interesting game, tho' I had completely forgotten about it 'til I saw it here.