Populous II: Trials of the Olympian Gods
for PC (DOS) 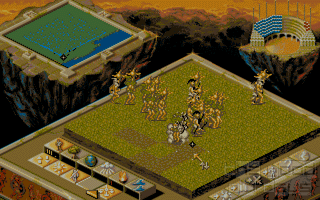 Populous 2 is a brilliant successor to the first Populous game which evolves the innovative game concept even further. Again you're a god leading your people to victory by changing landscape and casting various spells but this time you're not just any god but rather a son/daughter of the Greek godfather Zeus. Your final goal is to beat him in the 1000-level (yup!) conquest game.

So at the start you're selecting the characteristics of 'your' diety. You can distribute 5 lightning bolts which stand for experience points to 6 fields of spells. They represent the six elements and enable you to choose the respective spells. Allocating bolts to Fire will allow you to cast a fire column (the most basic spell) while Earth will allow you to create a devastating earthquale which is tearing the ground apart (as seen on a screenshot). You can either stack your bolts on one element thus making the spells more powerful or distribute them along the elements giving you a wider range of less powerful choices.

You can either play a custom game or the mentioned conquest. But starting out with a custom game doesn't mean that you can try out everything first. The spells available there are the same you can cast in the conquest game. At the very start there's only the fire column available. As you progress in the conquest you will be allowed to cast more and more powerful spells which only then are available to you in the custom game. So the focus obviously must be at advancing in the conquest. 1000 levels sound like an impossible task but there's a trick: if you fare well in a conquest scenario you're allowed to jump some levels. You could go from lvl 1 to lvl 9 for example.

Concerning gameplay nothing much has changed. The screen layout looks quite familiar. Two maps, the mana bar has moved to the bottom left with several buttons for the various elements and their spells and to the right are the buttons for action preferences for your people and game options (look into the manual for further explanations). The graphics also look surprisingly similar, not much of an improvement there.

But what this game makes shine brightly is the campaign mode. After successful scenarios you get more lightning bolts according to your score which you can allocate to the elements. Your opponents are various characters of Greek myth and reading their description could help you in your decisions what to build up. Fighting against a fire titan some good water spells could come in handy...

For detailed information about how and why just read the excellent manual (no, it's not the one from Underdogs

) which explains everything very detailed (and also can help a lot with Populous 1). Overall an excellent game! Enough said, look for yourself if you don't believe me