Invasion of the Mutant Space Bats of Doom
for PC (DOS) 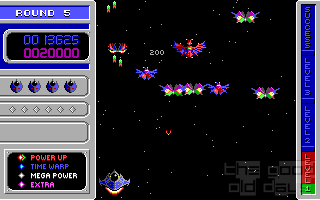 This review has been moved to the archive. The entry remains for reference.

I first discovered this game back in the early 2000s when I was a kid when I gotten the Game Empire CD from the Dollar Store. Now its 2014 and it's time to take a look back at Invasion Of The Mutant Space Bats of Doom.

Developed by the same guy who made Round 42, Invasion Of The Mutant Space Bats Of Doom is a game that has you shooting down waves of enemies while being fun.

Keep in mind that I'm using the keyboard for this game. The keyboard controls are very comfortable with space bar to shoot and the arrow keys to move your ship around. The response is spot on and it controls very well. In the end, good controls help make for a fun space shooter.

When you first boot the game up, you get greeted with beautifully painted 256 color VGA graphics which look amazing. Then when you get to the game, the color count does seem to drop, however, the graphics are still very good. The colors choosen for the ships are pretty good and the animations of the sprites are very good and the scrolling effects are spot on. In the end, while not being as pretty as Tyrian, it is still a awesome looking game for the time and it still is.

Its like many other space shooters of the time, you move left/right and shoot swarms of enemies on the screen, but on a PC. There's also a bonus round that you can play where you have to shoot the colored balls while they're at the correct spot to gain points. It can get repetitive but it's pretty fun for a couple of hours.

If you want a simple space shooter to play while you're bored, I would give this game a try. Sadly, this is based off the demo as the full version is no longer being sold. If you however want to play the best space shooter available though for DOS, I would say go with Tyrian 2000 or Raptor: Call of the Shadows.

Machine Specs I Played This Game On

I have the shareware version at home and I must say, that this is just about the best remake of the Space Invaders game. With new and imaginative enemies it makes it quite challenging to beat. The graphics aren't bad for a DOS action game of it's time. I especially like the effect of the evil fire-bats after you hit them :-).
Overall it's a pretty damn good game.
If you don't have it.
GET IT NOW!