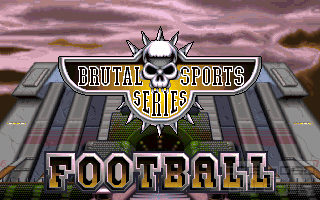 You would think that a landmark game such as Speedball 2 should have inspired more imitations. Though it actually took a couple of years until the first serious one appeared. Released in late 1993 and updated for AGA in mid-1994, Brutal Sports Football was celebrated by the local British press, but broadly shunned in the German magazines. Very likely, the latter ones had a suspicion it would not be treated favourably by the censors responsible for the protection of minors. 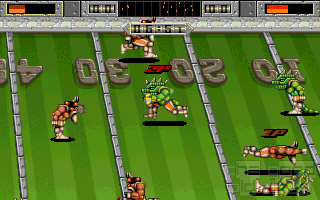 Played on a field reminiscient of American Football and using a similarly shaped ball which has to be moved into the opponent's team's goal area, this is where the similarities actually end. Scoring goals is just one way to win the game; the other being the decapitation of the opponent's players. At the end of the match, both goals scored and “headers” are translated into prize money which then needs to be used to revive or heal one's own dead or injured players.

Conveniently, weapons are scattered across the playing field. A sword obviously being more effective in drawing blood than a regular punch. Power-ups randomly appear as well, ranging from temporary speed upgrades to freaky lightnings striking everyone down who comes close. Even in the way of weaponless fighting, jumping tackles (easy to perform) and close punches (necessary for decapitation) are distinguished. 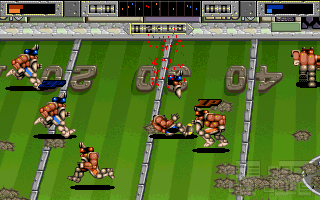 The ways to fight spruced up, gameplay focus shifts considerably towards this aspect. Whereas Speedball 2 had player injuries by exhausting their health bar, it mostly occured as a side effect there. Brutal Sports Football not just allows for following such a strategy, but it strongly encourages to do so. Although enemy teams do place differently on the typical trade-off scale between “fast, but weak” and “slow, but strong”, the most reliable way to win is always to go for annihilation.

Appropriately, the sports part is rather basic. The few moves possible in Speedball 2 (low pass, high pass + aftertouch) could actually be used to perform beautiful combinations between the players there. Although low and high pass are available in Brutal Sports Football as well, the lacking team artificial intelligence and the generally chaotic running about the field of absolutely everyone makes a successful string of passes a rare, mostly random event. In spite of a “radar” view of the overall playing field. 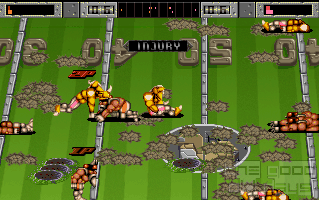 Even score, time almost up, all players exhausted

All this makes the game into what can be called a team brawler where there just happens to be a ball bouncing around instead of a bona fide sports game. More than one match has been won by just dropping that ball in a corner, picking up a sword and simply slaughtering all approaching players.

Accepting it for what it is, it is rather great! Graphics and animations are as good as the musical score. Even scrolling is finally sort of fluid in the AGA version. Selectable control schemes offer something for everyone and would have graced even some otherwise superior games. The ultra-cynic tone and the exaggeratedly spurting blood certainly help keeping players at a healthy mental distance from what's going on there on the screen. Most importantly, the fighting model is simple to pick up, yet just enough to make for some nice moments of (positive) frustration or triumph when a head comes off. Payoff is obviously much greater when playing another human controlled team. 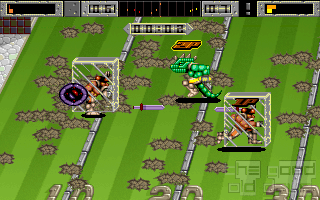 The one thing which could have made it last longer (apart from improving the actual sports part, of course) is the balancing. Even in league mode where losing one match should never be a big deal, interrupting the winning streak can actually lead to an unstoppable downwards spiral. Not even much of a spiral, in fact, but rather a crash into an abyss from which there is no escape. Prize money directly tied to scoring, a defeat often means that the team cannot be fully restored, decreasing the chances to win the next match. Newsflash: once again, The Bitmap Brothers were smarter, decoupling this.

Though then, the way to enjoy Brutal Sports Football is really to decouple it from expectations raised by its obvious inspiration and see it as a good game on its own right. After all, in spite of its similarities on the surface, it does play quite differently. The anarchic brawling is rewarding and after all, even the ball isn't completely useless. Just decapitate the enemy goalkeeper and then score goal after goal after goal and you'll see 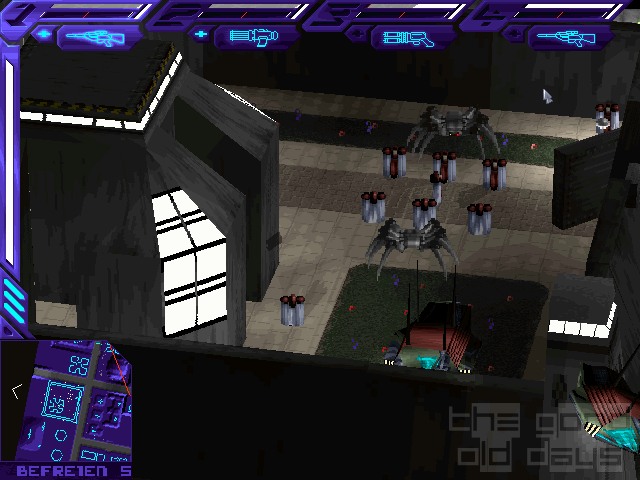