Desert Strike: Return to the Gulf
for PC (DOS) 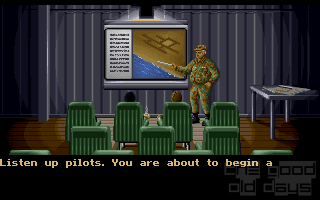 In Desert Strike you are the pilot of a chopper in the Middle East, your main objective being to take out a madman trying to take over the world. You accomplish this by achieving your mission goals, which are laid out prior to each mission and vary from destroying buildings and vehicles to capturing enemies to escorting other vehicles. Not only do you have to worry about being shot down, you can also lose ammo or run out of fuel, both of which can be corrected by collecting ammo crates and gas drums, respectively.

No music during gameplay, but there are plenty of sound effects. You hear your chopper constantly rumbling, the hum of the ladder being lowered to pick up hostages, the clang of your chopper hitting a building or mountain (which hopefully is not too often), and various other sound effects associated with your average quest to stop a madman trying to take over the world.

Nice variety in mission objectives, even though most of them are to blow something up or rescue something. The types of things you have to destroy vary, as do the situation you are in when attempting to do so. Be warned: in the last few levels, the game gets hard. Not only are the enemies much bigger and more heavily armored, but ammo and fuel is very limited. Half a minute not spent productively could be the difference between passing the level or not. In fact, in the last levels, you are more likely to run out of gas then to be killed by an enemy vehicle. This difficulty presents a challenge, but is often very frustrating.

Not a lot of incentive to play again. Points are not recorded, so there is no high score to beat. Time is not either, so that's out. There is no real reason to play once you've finished it...

This is a good game overall. Despite its sometimes frustrating gameplay and lack of replay value, it is well done and fun most of the time. It gives great satisfaction to complete a level you've been stuck on for quite some time (granted, it is amazingly frustrating to run out of gas just before you finish a level you've been stuck on for a long time). Give this game a try.

Mr Creosote:
I played Desert Strike quite extensively on my Amiga. I was never great at Action games, but these missions were just designed very fairly, so that they could actually be won with some careful planning. Just a pity that there were only four of them.
Moebius:
Great game, and i'm still not sure which is better, this or Jungle Strike.. they were made slightly different, but surprisingly neither one outhrows another. Hm...
Gesh:
Feel free to share anything about Desert Strike (1992) here!
[Reply] 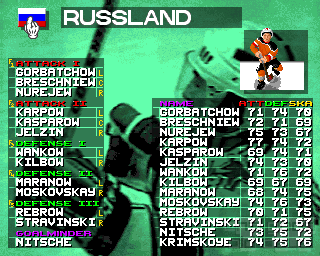