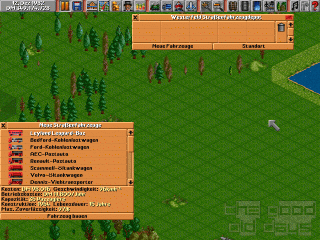 The game begins with the founding of your company. You choose a fitting portrait, the company colour and of course the name. Then it immediately starts with your first funds. Similar to Sid Meier's Railroad Tycoon, in which you could build tracks for your trains. In Transport Tycoon, you're not limited to railroad tracks for your iron horses. On the random map which is full of cities and factories, you can build a depot and bus stops, to transport citizens to the next town, for example. Alternatively, you can create a system of railway tracks through all cities with which you can not only transport people, but also goods like mail. For example, you can build a station near a forest and another next to a sawmill. Connect the stations and you can transport raw logs to the mill, which can be very profitable. In addition, you can conquer the skies with your planes or and waves of the sea with your boats. Either you're just transporting passengers, or you buy fitting vehicles for other goods. That decision is up to the player.

Mainly, the game is about expanding your company. To make your life really hard, you can add computer-controlled opponents who will then be trying to catch the best spots for themselves.

The whole interface is constructed in a very logical way. On the small list on top, you'll find everything you need. Statistics about your finances, info about your vehicles and so on.

The ever-expanding world makes Transport Tycoon a case for endless motivation. New plane, ship and vehicle models during the cause of the game make you restructure your company every so often. But the cities are growing independently, too.

This game is still one of my favourites amongst the business simulations. Later, another version was released under the title Transport Tycoon Deluxe.

bulvag:
My best game, I love it 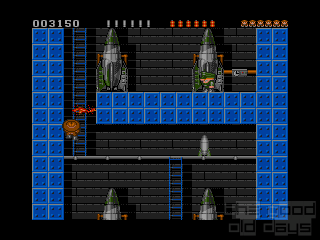