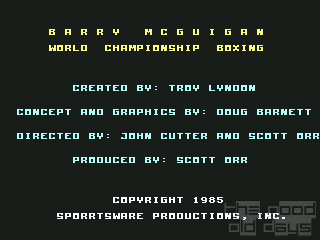 There are some things I've always enjoyed. Staying up until late in the evening on my C64 (or proudly-owned P IV more recently :lol:), reading, writing (as you can see here). Oh yeah, and watching box matches. I never practiced box professionaly, although I did have some recalcitrating classmates who realized that you *can* learn something if you watch the TV. Boxing is just one example, if you know what I mean :lol:

I was kindda curious to see what could have been done with boxing on a Commodore64 machine. Being one of those who had the chance of C64-ing much later after the C64 appeared (at that time, I wasn't even born... actually, I wasn't even a project, my parrents didn't even know each other), I seriously underestimated the power of a Commodore machine (I'm still amazed at what Amigas and Plus/4s can do, even after a serious amount of time in closely studying these machines). And this game is one big example.

I always admired the simplicity of programming on the C64. Software was fully non-bloatware at that time. And this could go as a serious example.

You see, Barry McGuigan World Championship Boxing gathers a whole lotta rosi... features, sorry (AC/DC syndrome again), in a dimension which wouldn't be enough to fit the title screen of modern games. Sure - the graphics are not exactly top notch (I'd rate them as pretty good for a C64 though), but there are quite a lot of things which makes this very diverse for a C64 game.

First of all, the boxer is fully customizable in terms of appearence. You can make him white or black, you can let him wear clothes of whatever colour you want. You can also customize his image - the way he looks/behaves in the ring. You don't really see that, but it does have an effect over your opponent. You can also customize the fighting style, so that it better suits your way of playing.

Still, this wouldn't be enough to make the game interresting. But there's more on it. Each boxer has a few attributes - like Stamina, Strength, Endurance - which are 'consumed' in fighting. They can be improved through training, and are not entirely independent. For example, growing stronger does give you a few points to Stamina, and Stamina gives you Endurance points. When you're in the ring, these attributes give you an idea of how you should balance your fighting, making everything more and more interesting.

Fighting is interactive, and takes place in something which *does* resemle a fighting ring (unlike other so-called games which are history and history should stay, isn't that right, Hanoi Kickboxing World 1984?). A minus is the absence of the refferee during fight - but that's okay anyway since there are no moments when refferee's intervention is required, so it would have been a waste of processing power and disk space to put a refferee.

Summing it all up, we got a good game in our hands, which you should play if you can get your hands on. Great game!