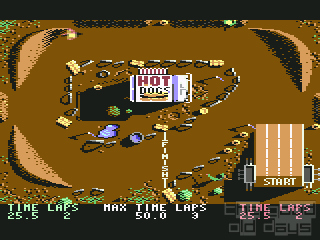 I'm a sadistical person. No, really. I had a cat and a girlfriend until three days ago. But my girlfriend fled when she saw how I tortured the poor feline.

Of course I'm kidding (actually, I don't have a girlfriend), *but* I'm sadistical enough to enjoy breaking my bones on bycicle.

There have thousands of games that treated motorbikes on the computers. I remember some that even ran on VIC/20 (one of the few uses of that computer aside from 'TV typewriter'), and countless games for Amiga, Plus/4, AT... I wonder if they did motorcycle games on computers with punchcards (yeah... that would be cool)

Anyway, games with *bikes* have been quite few unfortunately. Yet I somehow got my hands on one of them. Yes, everyone stand up and say a big 'thank you' to Thomas Karcher (tkarcher-at-cwazy.co.uk) for this game. Let me hear you: 'thank you, Thom...'. There we go.

Now, seriously (and coming back towards BMX Simulator, no more pointless wondering in my articles please!), this is one of the funniest games in hot-seat multiplayer. Basically, it features two player, competing one-on-one on a rounded-rectangular course (unfortunatelly, there's only one... but that's not much of a problem). The players compete on bikes of equal 'performance' - so it's ultimately the skill of the player that counts in who wins and who loses.

The control is another factor of fun. Although completely unrealistic, it's razor-sharp, and there's no braking: it's easier to make a mistake when the only way of slowing down is to decelerate. But decelarate too much and you're lost... exactly the kind of racing you'd expect from a typical party-time game.

Another plus is that racing takes place from a bird-eye's view which shows the whole track at the same time. No more fiddling arround with the hugely opressive split-screen mode (I always ended up in looking into my mate's screen, forever loosing contact with mine). That's how I was spending hours with my cousin, killing the poor cbm with this bloody game. No,really, I just loved it. Don't expect impressive graphics (after all, it's Commodore64...), and be warned that there's no sound for you to hear, but it's all continuous, timeless fun if you have a friend. Sure, there's a single-player mode, but multiplayer is what makes the game enjoyable.

Abnaxus:
I don`t know about the game but the review is great !
std:
Feel free to share anything about BMX Simulator (1986) here!
[Reply] 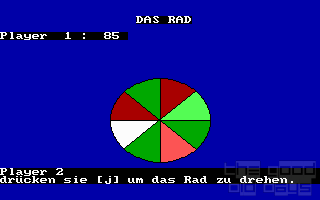