Indiana Jones and the Fate of Atlantis
for Amiga (OCS/ECS) 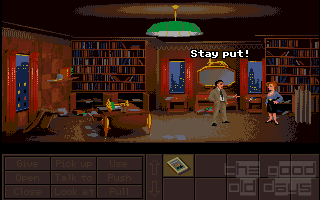 Indiana Jones - George Lucas' and Steven Spielberg's tribute to old 'pulp' adventure stories. Or is it the pure commercialism re-using old ideas? Hyper-mega-commercial of course. One thing is for sure though: the movies are highly entertaining, not a very deep story or multi-dimensional characters, but archetype villains fighting against a lone hero who is everything but perfect on the surface, but has a heart of gold and of course the athletic skills necessary to deliver a punch or two.

Indiana Jones and the Fate of Atlantis was unofficially titled Indiana Jones 4 because it isn't based on any of the three movies and was released laster than the games which are. So what we have here is a unique story which was originally written for this game - not recycled material.

The basic story would be worthy of a movie: Indiana Jones has to beat evil Nazis in the search for Atlantis where a fabulous source of power (in the form of Orichalcum, an alloy similar to brass) which the Germans want to use for warfaring purposes is thought to be located. The only halfway reliable source Indy has is the Lost Dialogue of Plato in which Socrates talks about the mysterious island.

The search for the lost continent takes Dr. Jones around the world and back. Exotic locations ranging from the Azores and Tijuana to the Sahara desert and ancient Greek ruins. For a game, that ensures diversity, but it is also the point where the game would not translate well into a movie: there is simply too much travelling back and forth, sometimes just to get one single object.

That is only a small detail though. The story works extremely well and has enough twists and surprises to keep you interested and curious. The characters are believable as long as you accept that evil is evil and good is good (just like in the movies...). You always have a clear goal and you always know why you are where you are - that can not be taken for granted in some other games...

The second big question is of course the gameplay. In the case of an Adventure mainly the puzzles. The game design wants it that you mostly have to solve riddles in a very limited number of locations, so the focus is not on finding the right place, but doing the right thing. These right things are mostly perfectly thought out, make sense and are challenging at the same time. Not overly hard, but exactly the right difficulty level for the average player. Especially the later puzzles involving Atlantean machinery are interesting.

Indiana Jones wouldn't be Indiana Jones without some action of course. I can almost see the pain in your face - action? First of all, there are fist fights. These aren't very hard and strongly remind of Pirates! If someone doesn't want to have anything to do with fighting, I can assure you all these scenes can be avoided with some thought. It usually requires solving an extra puzzle or just not running into Nazi soldiers. And if you get into a problematic situation anyway, there is always the super-suckerpunch which will strike down (almost) every enemy immediately - just press zero on the num-pad (users of the Amiga 600 are at a disadvantage here). Other arcade-flavoured sequences include camel riding, flying a baloon and controlling a u-boat, but not much can happen there.

As a special feature, Indiana Jones 4 is not a strictly linear game. There are quite a few alternate solutions to puzzles, if it's logical, it's mostly implemented. Furthermore, the mid-game can be played through three different paths, one concentrating on action, one on your wits and one on teamwork with the second protagonist: Sophia Hapgood, a typical Indiana Jones - female character. The locations for these three paths are mostly identical, but what you have to do there, the people with whom you have to interact and the goals you have differ. In Atlantis, all the ways get together again.
The replayability of Adventures is often discussed controversely, and rightly so. Indiana Jones 4 certainly is replayable, no doubt about that!

On the presentation side, there are unfortunately quite a few downsides. The musical compositions are great, the main Indy themes comes across well, just like the 'part 4 specific' tunes. Though the tunes have suffered in the the conversion into the Amiga format, a number of voices seems to have been lost. Similarly, the graphics have, of course, been converted from a 256 colour palette to the 32 colour ECS standard. Unlike previous Lucas Arts games which made a good impression in this regard in the way that the conversion of both sound and graphics had been done with care, this one gives the impression of a mostly automatic downscaling process, like the competitors of Sierra had done for years already.

And there we are at the technical side. The game consists of 11 floppy disks - just like Monkey Island 2. Unlike the other game, the data is not spread logically amongst the disks, so playing from floppies, you have to do a lot disk swapping - sometimes even only to get the feedback “that doesn't work”. Playing with less than four drives is only foolish. The only way it gets really good is installing it to a hard disk which can be done with the regular installer which comes with the game.
The game is incompatible with the AGA chipset of the 'new Amigas', the colours go all wrong. There is a patch for this floating around though if you don't have the choice. If you run it with an emulator, choose the ECS chipset.

Historically, Indiana Jones 4 can claim the sad title of the very last Lucas Arts game for the Amiga ever made. In case you didn't follow the development back then, you could get the impression (from this review, too) that it was the aging hardware which made it impossible to make more games. It wasn't. Lucas Arts was one of the companies which left the Amiga market because of software piracy. Their games were always amongst the most popular and best known ones, but 'strangely enough', they sold pretty poorly. Even the infamous code wheels couldn't prevent that. Even when the next generation Amigas were released, they couldn't be convinced to come back. In fact, Commodore even tried to buy the rights for the next Lucas Arts blockbusters (Day of the Tentacle and Rebel Assault) to port them to the Amiga by themselves. The deal was never completed though, probably because Commodore went bancrupt shortly thereafter.

So let's keep this game as a reminder of what piracy can cause. This nearly perfect game with its great story and excellent gameplay which would have deserved a top rating if it weren't for the messy technological side. The last of its type on our favourite computer. The end of an era...

T-Pow:
Thats a good point I ignored. Maybe because there wherent much female students in my classes.

Mr Creosote:
Firing him is not possible. He gets female students to his college (just look at the classrooms where he holds his lectures in the movies) - and that's a political necessity for any college. Obviously, they would lose a lot of public funding if they didn't reach their quota. So on the whole, it's probably better financially to pay for Dr. Jones' travelling escapades.
T-Pow:
Originally posted by Wandrell at 14:03 on April 26th, 2009:
He sends the bill back to the university. You see, he is preparing for the next classes.

I would fire somebody who sends me an several hundred dollar bill because he wanted to combine two objects with each other without an reason.

Wandrell:
He sends the bill back to the university. You see, he is preparing for the next classes.
T-Pow:

A very good game with only one logic error. Where does all the money come from which the planeflights to the locations cost?
I used the travel option very often to try out what happens when I use an item the "unusual" way and Indy never complained about the costs.

The story was not originally made for this game as it is said in the review, but for an Indiana Jones comic called "The Keys of Atlantis".

At a difference to Sam & Max, which similar because the creator of the comic worked on the game, the original is worse than the game. The game's story is a much improved version of the one of the comic which keeps all the important and interesting points.

Mr Creosote:
Feel free to share anything about Indiana Jones and the Fate of Atlantis (1992) here!
[Reply] 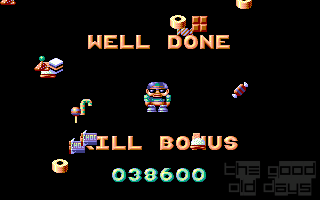