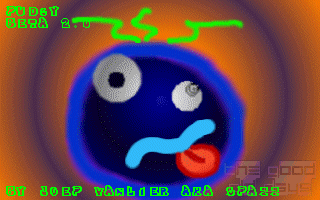 This picture shows Pudgy. Pudgy is neat blob-like creature which lives in a strange world. A very harsh and hostile world in fact. Hardly fitting for a peaceful creature like him! But well... his instinct to survive is strong enough to prevent that he gives up himself. So what should he do? He has to find a way out of this world.

His surroundings always consist of strange platforms which are floating around in the air (or what kind of athmosphere this planet may have). One false step and he falls down into nowhere! Then he's dead. Does he want that? Not at all! So he tries to keep his 'lower part' (he doesn't have any feet...) on solid ground.
To ensure that, he can not only crouch to left and right but also jump. Even in the air, he can still maneuver a bit, so he's not completely helpless when he has used to much power initially or anything similar.

But even on this solid ground, there are hazardous dangers! Spikes which hurt his skin (?). Ugly and evil monsters which are after him. Fierce traps like fake ground or land mines! All this has to be avoided. Because if he doesn't, this will happen:

But if he manages to survive, he'll finally escape.

Spazz' first game has been completely written in C++. It's a classic Jump'n'Run with stress on dexterity and good timing. The player controls Pudgy via keyboard. This works great! There are no weapons or any other kind of defense. So the enemies are invincible. No guns, no jumping on the head. Running away and avoiding them is the only option. So you spend your time with exact jumping most of the time.
There is no scrolling. Each level consist of up to 7 screens. You switch between those via doors. The final goal is to reach the level exit. Apart from the enemies and traps, there are also obstacles in the way sometimes. These blue and green walls can be deactivated by switches though. It may also happen that this deactivation frees some monsters though, so it's not just blindly turning them off, but a nice little puzzle element! A level never takes longer than a minute.

The level design is mostly fair, position of the monsters and traps is well-thought out. Still, the game is quite hard. There is always a screen which slows down the completetion. Spiders for example are very fierce enemies. But - as mentioned before - that makes the game just more demanding and not frustrating!

A very interesting option is that the player can change the looks of the game. The background image can be freely chosen! And it's very easy to add custom backgrounds. Great idea!

There is also a level editor - very useful and handy, but still in beta stage. The whole game is still a beta in fact! Some issues still have to be resolved. But the bugs are so few that it's already fun to play.

Some things which should be improved:
-the collision check between Pudgy and spikes/enemies could be more exact
-linking the levels (maybe some kind of background story?)
-the picture of the hurt pudgy looks like it's missing the upper right part
-more ground types
-more enemies
-more more traps
-levels with different difficulty
---->more variety

On the whole, Pudgy has the potential for a neat game, but at the moment, this basis isn't used extensively enough.

To run the game, type pudgy [levelname] [background] where levelname is the file name of the level (e.g. level2.lvl) and background is the number of the background image (from 0 to 3 currently).

An excellent manual is included!