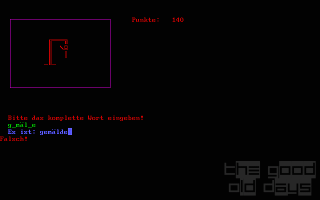 All games made by Barschsoft…

The first entry in this here reproduced log can be backtraced to 1997. Like so often, die psychosis of the testee is caused by events in his childhood. In this case, it's the strong nostalgic memories about the dominating products of long dead producers of leisure electronics.
Not being aware of the irony of using Microsoft products to live out these childhood fantasies, the typical tries to bring back at least brief flashes of these feelings begin. The results are fittingly naive.

Dices: Roll a dice. Can be played without a computer just as well (or better).

Words: A variant of “Hangman”. It differs from the original in that you can't guess single letters which are then added, but there is always half of a word displayed and you just have to fill in the blanks. A failed try results in another piece of the gallows to be added. A success displays the next word. This simplification is a typical sign of the fine line between the will to imitate the 'old stuff' as accurately as possible and the inability to do so.

Zahlenraten: The computer thinks of a number and the player is supposed to guess it with just a few tries. Suffers from the lack of customization of the number range and the number of tries.

Of course, none of such tries can ever actually reproduce what the foggy memories are telling. Just like all testees before him, this one reacted with strong frustration to this revelation. This frustration resulted in extreme cynism.

The catalyst of these overwhelmingly negative feelings is called Chorweiler-Shootin. On the surface, it is set on an airport where the player is supposed to shoot people who suddenly turn up. Beneath that, it immediately becomes obvious to the learned observer that it is in fact a payback to the own childhood and its related memories. The murdered victims represent those. The also appearing sheep which are not to be shot are symbols of the repressing 'values' still inherent in the testees subconcious, but which he's not aware of.

To get a deeper analysis of the phrases displayed on the screen in Chorweiler-Shootin, the respective object has been forwarded to colleague Freud. The testee is willing to answer further questions himself. He can be reached at myheroin@lycos.de or through his homepage.

Mr Creosote:
Quote:
All games made by 'Barschsoft'... 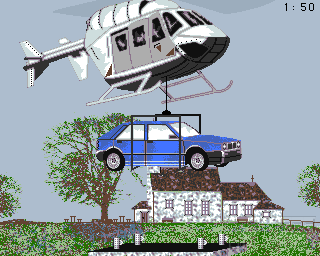