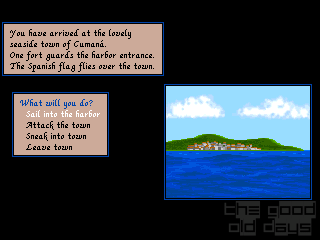 Arr, Jim-boy! After three years, the vicious pirates have finally found their way to the prosperous shores of the Amiga. But instead of the ageing, sea-worn face of the original, we get a completely new and streamlined version - all the wealth which has been amassed in the meantime shows!

You're put in the role of a small pirate sailing the carribean some time between 1560 and 1700. Unlike today (?), piracy wasn't strictly illegal then: each country employed swashbucklers to raid their enemies' ships and cities. So this is the situation you find yourself in: fight for the glory of your own country and fill your own pockets with gold as a nice side effect.

You start out with one single ship and only a few men. Only unprotected merchantmen will most likely be your targets. As your fame (and wealth) grows, more men are willing to join your crew, and with each ship you board, your fleet grows. Soon, even the largest cities with the best fortifications will tremble at the sound of your name. However, there are still even bigger challenges - like raiding the Spanish Treasure Fleet or the Silver Train...

Pillaging is of course not everything in the life of a pirate. As everyone who has read at least one pirate novel knows, the whole carribean was full of hidden treasures in those days. If you're just lucky enough to get hold of a map, you're in the race of digging one up. The crew doesn't care where the gold is coming from as long as it is rolling in anyway.

Pirates! is one of the very few games which can't be classified by the means of the 'classic' genres. It was unique when it made its debut on the C64 in 1987, it still was when the Amiga port came out in 1990, and it is still today. You sail around the carribean in 'real time'. Whenever you encounter another ship or sail near a town, a few multiple choice menus are presented to you. Do you want to let the ship pass or fight it? Do you want to sail into the harbour peacefully or ready the guns for battle with the fort? Or do you prefer landing somewhere on the nearby shore and attack the town from land?

Each choice either triggers another menu (the peaceful options...) or an action scene. If you attack something 'by ship', the map is 'zoomed in' and are in control of your ship again. Only this time, there is another one (or a fort) firing its cannons at you. So you're doing the same (in pure self-defense) - until you crash together. Now, man-to-man combat starts. The captains meet for an honourable fencing duel which decides about the (hopefully positive) outcome of the battle. In your own country's towns, you can sell the goods you stole, get special missions from the local governours, have your fleet repaired and a lot more.

If all that isn't enough to keep you motivated, there are a few story elements to discover as well. For example, most members of your family are for some reason lost on different islands. Other captains may know something about their exact whereabouts, but they won't disclose this information voluntarily, so you have to hunt them down first.

The Amiga version of Pirates! is definitely the ultimate one. Wonderful graphics and brilliantly sampled classical tunes await those who dare to enter this fascinating world...